Nunavut’s chief justice Browne gets ready to move on

Nunavut lawyer: “Her impact cannot be quantified or measured” 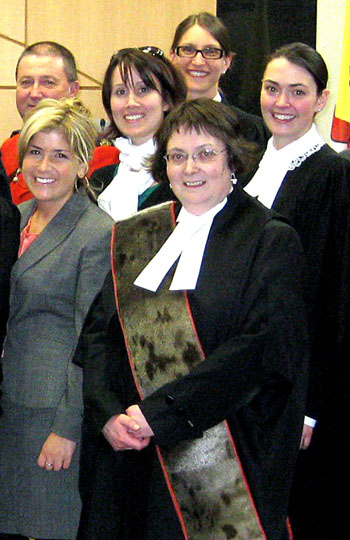 When Justice Beverly Browne (on the front at the right) departs the Nunavut court Sept. 30, she’ll leave countless admirers and an impressive legacy that includes a functioning court system she built from scratch after she became Nunavut’s senior judge in 1999. (FILE PHOTO) 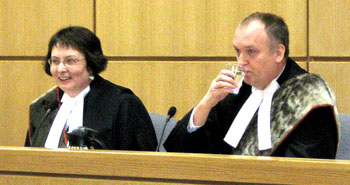 Justice Beverly Browne with Justice Robert Kilpatrick, who was appointed to the Nunavut court in 1999.

Most Saturdays this spring — when she wasn’t travelling on circuit court — you could find Nunavut’s chief magistrate blowing a mean baritone sax with the teenagers of Iqaluit’s Inuksuk High School jazz band.

This year alone in Iqaluit, she also tootled her sax with students and adults in the pit orchestra for a production of Fiddler On The Roof, played organ at Anglican church services (as she has almost all her two decades here), and led the youth handbell choir.

That is simply Nunavut’s Chief Justice Beverley Browne doing one of the things she loves best — making a joyful noise with young people.

Music has been one of Browne’s greatest passions in her two decades in Iqaluit, where along with others, like Darlene Nuqingnaq, she launched a summer music camp, founded the Iqaluit Music Society, kicked off the city’s tradition of joint high-school-and-community musicals with the 1999 production of GodSpell — in both Inuktitut and English — and offered music lessons to many of this town’s children.

“From the meagre beginnings, music is an integral part of the community now, and that’s comforting to know,” she says. “My goal for Nunavut would be a music and drama teacher for every school, because it gives young people such a sense of confidence and self image.”

Music has also allowed her the kind of non-political, non-partisan connection with the community that she says a judge needs to do her primary job well.

Because Browne’s other great passion, of course, has been the law.

And now, after two decades as a judge in Iqaluit, including the last 10 as Nunavut’s first and only senior judge presiding over the Nunavut Court of Justice, Chief Justice Browne is leaving the territory to take a position in Alberta.

She has accepted a post in Edmonton with the Alberta Court of Queen’s Bench, effective Oct. 1, although typical of her work ethic, she won’t be departing her job here until Sept. 30.

The move continues her 30-year career in the service of the law.

Browne was called to the bar in Alberta in 1977, after articling in Yellowknife — where she caught the “northern bug.”

She later ran her own general law practice in small-town Vermilion, Alta., before becoming a territorial court judge for the Northwest Territories in 1990.

They gave me a choice between Hay River and Iqaluit, she recalls. “I didn’t hesitate. I knew this was the place that I wanted to come.”

Browne spent the next decade as the territorial judge responsible for all communities in the Baffin Region.

And when Nunavut was born in 1999, she became the first senior judge in Canada’s newest and largest territory, responsible for running — and in many ways, creating — the Nunavut Court of Justice.

“When I got to Iqaluit in 1990, there were two court clerks, one court reporter and myself,” she recalls. “We now have 40 staff working in the court house — and four judges.”

Not forgetting a new courthouse, which she calls a significant “symbol of the importance of the judiciary to a responsive democracy.”

Specifically, Browne has been passionate about ensuring that the law is applied as fairly and equitably as possible, to everyone in Nunavut, and with an understanding of Inuit cultural context.

Or, as Browne herself put it in an early annual report: “The overall philosophy of the Nunavut Court of Justice is to take all steps possible to ensure that each individual living in Nunavut has reasonable access to justice when required.”

In large measure, she can consider herself successful in that, as many others attest.

Alexina Kublu, Nunavut’s senior Justice of the Peace under Browne until she was appointed Language Commissioner last year, lists some of the senior judge’s accomplishments in the first 10 years of Nunavut.

They include taking a lead role, but always in consultation with the communities, to:

Others are equally effusive.

“Judge Browne has been a champion for Nunavummiut for many, many years,” Teena Hartmann, director of the Keewatin Legal Services Centre, says. “In criminal decisions, in family law, in dealing with customary adoptions, she always makes room for the traditional perspective.”

In fact, notes Hartmann, Browne’s decisions recognizing the special nature of Inuit customary adoptions — where the adopted child often retains close ties with his or her biological family — are now being cited in Australian courts dealing with similar situations among the aboriginal peoples of the Papuan islands.

“She’s been a great mentor for lawyers coming into Nunavut,” myself included, she adds.

And in an open letter to Browne, Peter Harte of the Kitikmeot Law Centre in Cambridge Bay says she “leaves behind a legacy marked by the exercise of compassion within the rule of law.”

Her impact, he adds, “cannot be quantified or measured.”

For her part, Browne recognizes the gift she was given of being in the right place at the right time, of being able to build a court system from the ground up.

“I had a fair sense of what we were trying to accomplish in court,” she says, and it was wonderful to be part of the working group and the community consultations that led to development of the new Nunavut Court of Justice.

Fittingly, perhaps, one of Browne’s last acts as Nunavut’s senior judge was to preside over the call to the Nunavut bar in Arviat, Sept. 1, for Lillian Aglukark, the last but one of the Akitsiraq grads to become fully qualified to practice law in the territory.

“I believe, as time goes by, these graduates of the Akitsiraq law school will have a significant effect on the development of Nunavut,” Browne said

“What I’m going to miss most in Nunavut, of course,” Browne says as she prepares for what will inevitably be an emotional departure, “is all the wonderful people in the communities who welcome me when I get off the plane.”

And that includes the elders with whom she has shared her courtroom bench. “I learned from them about relationships and about life. I consider some of them very dear friends.”

After all those years of circuit court, every community feels like home.

But Browne promises she will be back from time to time too, either “as a deputy judge, or to help with training or special projects.”

There’s no doubt she’ll be welcomed.