Nunavik on track for warmest winter ever

“I’m never scared to go out on the ice, but I am this year” 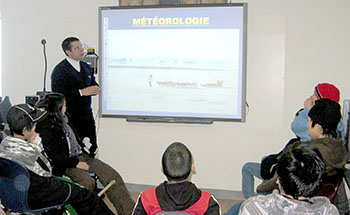 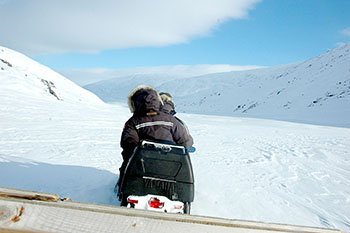 Nunavik’s frozen waterways are not as safe to travel on this winter as they usually are, and many communities have reported losing snowmobiles through the thin ice. (PHOTO BY SARAH ROGERS)

KANGIQSUJUAQ – Nunavik is on track to claiming its warmest winter on record.

Environment Canada logged an average temperature of -14.5C during December, January and February.

That’s the mildest three-month winter period seen since at least 1947, when the agency began monitoring weather from Kuujjuaq.

“These three months together make the warmest winter on record,”
said Environment Canada meteorologist Rene Heroux. “We beat the old record by more than one degree.”

The mercury went as high as 3.9 C in Kuujjuaq one day in February, while the other two months saw temperatures above the freezing mark on a few occasions.

March did not factor in because the month was not over by press time.

There are always three factors which can help explain the warm weather, Heroux said.

These are normal variability from one winter to the next, climate change and El Nino, a warming of the Pacific Ocean every few years that causes unusual global weather patterns.

“Usually Nunavik and the Arctic are spared, but this year it was different,” Heroux said. “The consequence of that was that Europe had a really cold winter.”

There was plenty of snow too, although not a record-breaking amount.

The Kuujjuaq area received 93.8 centimetres of snowfall during that same three months. Some parts of the region likely had heavier snowfall, but the amount on record was not significant.

Back in 1964, for example, Environment Canada recorded 236 centimetres of snow in Kuujjuaq for December, January and February.

But warmer, snowier winters inevitably bring certain dangers, one of which is a thinner layer of ice for hunters and snowmobilers who use the region’s frozen waterways to travel.

Several Nunavik communities have reported losing snowmobiles through the ice this year, including in Tasiujaq, where a man died in February when he tried to retrieve a machine stuck in slushy ice.

Only weeks ago, a snowmobiler in Kangiqsujuaq lost his machine under the sea ice roughly ten km from town – a place where the ice is usually guaranteed to stay thick throughout the winter. The hunter was unharmed.

“There was so much snowfall before the ice got thick enough,” said Aloupa Kulula, a municipal administrator in Kangiqsujuaq.

“There’s a foot and a half on top of the ice that’s not freezing that snowmobiles are getting stuck in. And due to all the snowfall, the unfrozen parts of the ice aren’t visible.”

This year, snowmobilers can travel about 15 m safely towards the Hudson Strait, Kulula said, but normally they’re able to travel 30 km.

“The majority of us believe that the climate is changing, but it’s the change in the sea temperature that’s really [noticeable],” he said. “You can see how much the ice is receding. I’m never scared to go out on the ice, but I am this year. My snow machine is expensive.”

Cracks in the sea ice are also bringing seal populations to the surface in more places, which in turn has attracted polar bears to new territory.

When Heroux visited Ivujivik earlier this winter, he said hunters in that village had already killed five bears this winter, which were found wandering close to town.

He met with municipal managers, search and rescue teams and students to show them different ways to access weather information, such as navigating the Environment Canada website to see weather warnings for Nunavik in advance of travel.