ACL believes aluminum can scheme will pay for itself 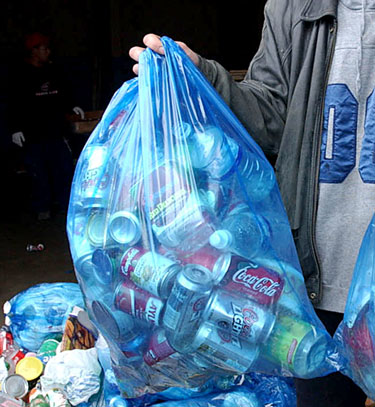 Arctic Co-operatives Ltd. plans to implement an aluminum recycling program in Nunavut this summer. The program will be funded in part by a 10-cent levy on disposable grocery bags. (FILE PHOTO)

Arctic Co-operatives will launch a Nunavut-wide recycling program for aluminum cans this summer, less than a year after the Government of Nunavut scrapped its own recycling pilot project.

Duane Wilson, the vice president of merchandise and logistics for Arctic Co-ops, said the company will collect, store and ship the cans to the south as back-haul on sealift ships.

Arctic Co-ops will fund the program in part through a 10-cent charge on disposable plastic grocery bags that will start June 1.

“We feel pretty confident we can deliver a measure of aluminum recycling [in Nunavut],” Wilson said.

The project’s roots date back to a resolution passed at the Arctic Co-ops’ annual meeting in May, 2010, which called for a recycling program in Nunavut.

In September, the GN wound down a recycling pilot project in Iqaluit and Rankin Inlet and said expanding the program across the territory would be too expensive.

But Wilson said Arctic Co-ops has the infrastructure in place in most communities to run a recycling program: they have places to collect and store the cans, staff to administer the program, and even a cable TV service they can use to get the word out.

It helps that co-ops bring up dozens of sealift containers full of supplies every summer, which mostly end up being shipped back south empty, Wilson said.

“We have a lot of the things in place that can address a lot of these problems, these obstacles to recycling,” Wilson said. “We’ve got the wherewithal in a community to pay somebody, we’ve got an administrative structure, we’ve got a building.”

Wilson said local co-ops will be free to tailor the program the way they want. Local sports teams and groups can use the program as a fundraising option: filling a 20-foot seacan with aluminum cans will pay $1,500.

Arnie Brown, the director of public works for Rankin Inlet, said the GN’s recycling pilot project virtually scrubbed Rankin’s streets clean of pop cans, because some people used the program as a source of income.

“The recycling program in general I think is a good idea,” Brown said. “It’s got to start someplace… There’s definitely a need for it.”

But Brown is skeptical that the economics of the Arctic Co-ops program can work. He said the bag levy would drive up costs for customers, who would migrate to reusable bags or cardboard boxes to carry their groceries.

Wilson said the co-ops are cutting costs by taking donations of services from Canadian North and Nunavut Sealink and Supply. Negotiations with the GN for funding are underway, he added.

“This is revenue neutral for Arctic Co-ops,” he said. “We’re not aspiring to make anything on this.”

Wilson said the company is working on a plan to offer recycling services in Iqaluit and Clyde River, the two Nunavut communities without co-op stores.

Arctic Co-ops owns cable television services, a gas station and an office supply business in Iqaluit, while Clyde River has no co-op presence at all.