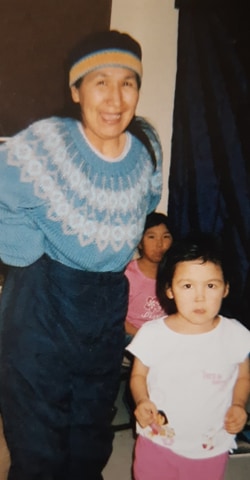 Mina Echalook Idlout is pictured here with her young daughter Anna on a visit to see her cousin Annie Nulukie in Inukjuak, likely taken in 2004. Nulukie said it was one of the rare times Echalook was able to walk on her own, following an incident in 2003 that left her partially disabled. (Photo courtesy of A. Nulukie)

When a Nunavik woman died of COVID-19 in April, her family had to wait a month to bury her

In early May, communities in Nunavik breathed a sigh of relief with the news that all 16 people in the region who’d been infected with COVID-19 had recovered.

People revved up pickup trucks and snowmobiles to parade through their villages in celebration.

But as the region was declared COVID-19-free, another Nunavimmiut woman died quietly in the Montreal care facility where she had lived for almost 15 years.

Mina Echalook Idlout, who was originally from Inukjuak, died on April 28. She was 51.

She is the only known Nunavik resident to have died of COVID-19.

Echalook was physically disabled and mentally impaired following a serious head injury she sustained in 2003 and an aneurysm that came later. She required full-time care, which wasn’t available in her home community.

So Echalook moved into a long-term care facility in Montreal in 2005. Fifteen years later, Grace Dart, the centre where she lived and died, was devastated by COVID-19. Since April, 64 people there have died of the virus, including a staff member.

But Echalook’s family in Inukjuak only learned about her death after the fact.

It was only days later that health authorities contacted one of her siblings in Inukjuak to inform them that Echalook had passed.

A doctor from the local health centre later came to speak to the family and explain that Echalook had been tested and confirmed positive for COVID-19 a few days before she died.

“I was shocked,” said Larry Idlout, Echalook’s husband who lives in Inukjuak. “I was terrified. It was totally unexpected.” 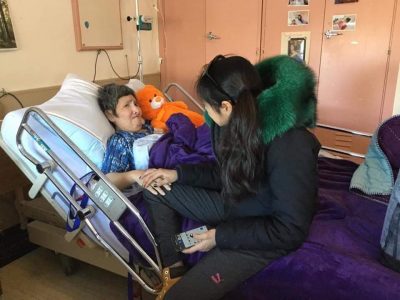 Mina Echalook Idlout is pictured here with her daughter Anna in the long-term care facility in Montreal where she lived for over a decade following a severe head injury and an aneurysm. (Photo courtesy of Minnie Echalook)

As long as Echalook had lived in care in Montreal, Nunavik health authorities provided four airfares a year for family members to come and visit. The last time Idlout saw his wife was last summer.

The doctor told the family that Echalook was restless in her final days and treated with morphine. They never heard directly from anyone at Grace Dart, though Idlout said she had always been well cared for there.

Idlout and Echalook had been married for 24 years, if his memory serves him well. They had three boys together and then adopted another boy and girl.

Echalook was “very warm and very loving,” Idlout said; she was a good mother and a talented seamstress.

“I’m kind of mixed up about it,” he added, tearfully.

If news of Mina’s death was difficult, however, the next few weeks would prove to be even more so, as relatives waited for her remains to be returned home.

“This was our precious Mina”

Echalook and her cousin Annie Nulukie grew up together in an extended household in Inukjuak and remained close, even after Nulukie relocated to Kuujjuaq as an adult.

Nulukie said the family was shocked and saddened to find out about her death.

“It’s not in our tradition to just bluntly tell a family member that someone has passed,” Nulukie said. “So it was really hard.”

“It became my role to make sure she got home, even if she’d already passed,” said Nulukie, who works for the regional health board in Kuujjuaq. “It was a shock for the family when we learned she would have to be cremated. We couldn’t imagine a body being cooked in the oven.”

The Quebec government has imposed regulations on how long-term care centres treat the bodies of residents who’ve died from COVID-19, to prevent further spread of the virus. Embalming isn’t permitted, and since Echalook’s remains would have to be flown home, she had to be cremated.

But cremation remains a foreign thing to most Nunavik communities, where there are no funeral homes and community members typically prepare bodies for burial themselves.

“But it was the only way to get her home,” Nulukie said. “It felt like we were losing control.”

Nulukie then worried that Echalook’s remains would be returned in a crude box or a bag, so she requested that the local health centre pay for an urn, which the centre finally agreed to.

“This was our precious Mina,” she said.

Echalook’s remains finally arrived in Inukjuak the final week of May—a month after she died. Family members picked up the urn from the airport and brought it directly to the graveyard, where Echalook was buried on May 29 in a small gravesite.

About 15 to 20 family members attended the funeral ceremony, including Nulukie, who was able to fly in from Kuujjuaq. She described the burial as “a relief” for Echalook’s loved ones.

What happened to Mina? 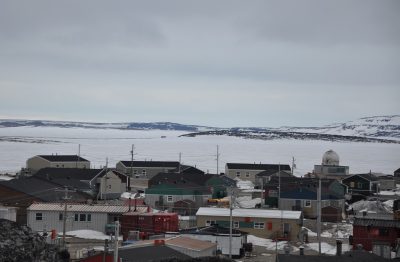 A springtime view over Mina Echalook’s hometown of Inukjuak, a community of 1,800 on Nunavik’s Hudson coast. (Photo by Sarah Rogers)

Echalook’s burial brought closure for some, but her death has also opened old wounds and led to the revisiting of a 17-year-old question: how was she so severely injured in 2003?

In the weeks since Echalook died, the Kativik Regional Police Force has re-opened an investigation into the alleged aggravated assault of Echalook, stemming from that 2003 incident.

It’s unclear whether Echalook ever reported the alleged assault herself, but the incident was reported to police. No one was ever charged.

In an email to Nunatsiaq News, the KRPF said it has heard from witnesses and plans to send an investigator to the community to speak to more people. The police would not say whether they have a suspect.

On the day that Echalook sustained her head injury, her husband, Idlout, said she was with his sister at his parents’ home. The sister declined to be interviewed.

Idlout said he was out in his shack at the time.

“I wasn’t there. I don’t really know what happened,” he said. “I don’t know why she was shaking.”

The story that Echalook often told people was that she slipped, fell and hit her head. But Nulukie, her cousin, also said that in the years that followed, Echalook had lost her memory of what happened that day.

After the 2003 incident, Nulukie said Echalook’s injuries were extensive and required months of rehabilitation. She had to relearn basic motor skills and never fully regained her memory.

Nulukie said Echalook was also frustrated and upset, especially as a mother unable to fully care for her own young children.

Doctors told the family that her head trauma is likely what triggered an aneurysm a few years later, in 2005, which left Echalook so severely disabled she was no longer mobile or able to speak.

“She always knew who I was, but she wasn’t able to communicate,” Nulukie said. That was complicated even more by the fact that Echalook lived in a southern care facility, where no one spoke her mother tongue.

Over the years, Nulukie advocated to bring Echalook home to Nunavik, so she could be closer to family and receive care in Inuktitut.

“Before she became handicapped, Mina was really a decent person,” Nulukie said. “She had a quiet, loving energy.”

“She was a really good mother—she wanted so much for her kids.”

Echalook loved to knit and sew clothing; she took custom orders and, in the months before she was injured, was planning to open up her own business.

Nulukie laments her cousin’s life being cut short, as well as all the time Echalook was forced to spend away from home and family.

“She always saw me as hope, but I couldn’t get her home, knowing there were no resources in Inukjuak,” she said.

“The day she arrived back in Inukjuak, it really helped. We all understood how much she really wanted to go home.”