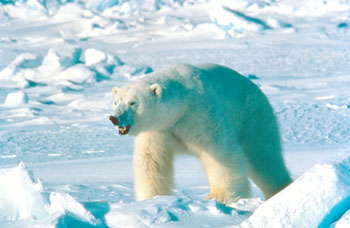 Hunters from Pond Inlet, Clyde River and Qikiqtarjuaq said they will “hunt what we want” if the GN reduces the Baffin Bay polar bear quota from 105 to 64. The hunters, resentful that the polar bear is now a media symbol for climate change, categorically rejected information presented by Government of Nunavut scientists at a Nunavut Wildlife Management Board meeting in Iqaluit this week. (FILE PHOTO) “Those are our bears and we can hunt the way we want,” Lootie Thomasie of Qikiqtarjuaq’s hunters and trappers association told the Nunavut Wildlife Management Board on Sept. 29. (PHOTO BY JANE GEORGE) Drikus Gissing, the director of wildlife for the Government of Nunavut’s environment department, defends science and its role in polar bear management at the meeting of the Nunavut Wildlife Management Board held Sept. 29 and 30 in Iqaluit. (PHOTO BY JANE GEORGE) “We’ll hunt what we want” if the Baffin Bay polar bear quotas are cut. That’s the message delivered Sept. 29 by Manasie Audlakiak of Clyde River’s Nangmautaq hunters and trappers association [second on the left] to the Nunavut Wildlife Management Board in Iqaluit. (PHOTO BY JANE GEORGE)

The polar bear may now be a symbol for why the world must curb climate change in the Arctic.

But polar bear management was a source of frustration and anger this week in Iqaluit when hunters, officials and members of the Nunavut Wildlife Management Board met to consider a Government of Nunavut proposal to lower the polar bear quota for Baffin Bay.

Kooneeliusie spoke at a special public meeting of the Nunavut Wildlife Management Board held Sept. 29 and Sept. 30 in Iqaluit.

Consensus on a reduction to the polar bear quota in the Baffin Bay appeared unattainable as researchers and hunters disagreed.

Hunters threatened to completely ignore the quotas if they see any cut to their quota of 105, which is split between Pond Inlet, Qikiqtarjuaq and Clyde River.

“If the quota is cut, things will get hot,” said Jayko Allooloo from the Qikiqtani Wildlife Board.

The wildlife board called the meeting at the request of the GN, which obliged the board to move its regularily scheduled meeting from Kugluktuk to Iqaluit.

The board had to respond to a GN request made as a “ministerial management initiative” from Environment Minister Daniel Shewchuk, who called the Baffin Bay harvest of 105 polar bears “a continued conservation concern” in a June 30 letter.

Referring to science, which says the number of polar bears in the Baffin Bay population fell from 2,100 to 1,500 over the past 10 years, Shewchuk said the current quota was not “sustainable” and should be changed before the start of the hunt in October.

“It is critical for effective management that we get BB back on track,” Shewchuk told Henry Flaherty, chair of the wildlife board, which can recommend measures to establish, modify or remove total allowable harvests in Nunavut.

The GN suggested three options for reductions: cutting the current quota from 105 to 64, imposing a total moratorium on the hunt until numbers recovered to 2,000, or imposing another quota based on a new population estimate.

But hunters from Pond Inlet, Clyde River and Qikiqtarjuaq who came to the Iqaluit meeting said right from the start that the GN has it all wrong.

They say quota cuts are unnecessary because there are more polar bears, not fewer.

And they slammed southern media who have made polar bears a symbol of climate change, to be protected at all costs.

“Those who talk about Baffin Bay bears decreasing in numbers have never been there personally, they should come to the area and experience it for themselves… Why do we Inuit have to have our economic situation interfered with?” said Jaykolasie Kiliktee of Pond Inlet’s hunters and trappers association.

“Those are our bears and we can hunt the way we want,” said Lootie Thomasie of Qikiqtarjuaq’s hunters and trappers association.

And it isn’t fair for Inuit hunters in Baffin Bay to be penalized for climate change when they don’t produce any greenhouse gases, yet another speaker said.

They deplored the small role given to Inuit traditional knowledge in polar bear research, which, they said, had worked well for them over many generations.

Some speakers suggested that biologists be sent “on holiday” while Inuit hunters take over their research.

In defence of science’s numbers, GN polar bear biologist Lily Peacock responded that scientific methods are “quite old” and involve “simple adding and subtracting” with variables to make the results “more truthful.”

But Peacock didn’t persuade her critics.

They complained that the research surveys are infrequent and poorly done, saying the 10-year old data used by researchers on the Baffin Bay population is out of date and inaccurate.

Nunavut Tunngavik Inc. pointed to the scientific estimates for bowhead whales, whose numbers eventually turned out to be much higher than scientists first thought — just as Inuit hunters have said for years.

If they were considered to be one large population group, its health wouldn’t be questioned, Williams said.

One by one, hunters talked about polar bears marauding meat caches, wrecking cabins, eating seals and walrus pups, and endangering people in the communities.

“People in Pond Inlet today have to work hard to protect themselves,” Killiktee told the board.

For hunters, these kinds of observations constitute evidence of higher polar bear numbers.

If there’s any problem with the numbers, it’s likely to be found in Greenland they said, which overhunted polar bears in Baffin Bay until quotas were established in 2006.

The process for calling the special board meeting also came under fire, because the Baffin Bay polar bear quota was supposed to have been settled at a public hearing to have been held in Pond Inlet in April 2008.

Many said the special meeting was reflected international political pressures on the territorial and federal governments.

These include a scheduled signing Oct. 17 for a memorandum of understanding with Greenland on polar hear management and pressing deadlines for international trade groups.

Environment Minister Jim Prentice reminded the board in a letter that the European Union has already banned polar bear products from Baffin Bay and more sanctions are possible.

This means it has to prove that there’s no environmental damage from continued trade in polar bears for the Convention on International trade in Endangered Species.

“It will be difficult to defend trade where available information indicates overharvest [in Baffin Bay] is a conservation concern,” Prentice said.

Next March, the U.S. Fish and Wildlife Service also plans to ask CITES to put polar bears on to a list, called Appendix 2, where no trade at all would be permitted, Prentice said.

This would “effectively close all trade in polar bear products from anywhere in Canada to any other country, and intensify international scrutiny of Canada’s management and consevation of polar bears,” Prentice warned.

Canada would be in a much stronger possible to opppose the proposal if it looks as if Canada is “managing issues of conservation concern such as oveharvest.”

So a decision not to reduce the Baffin Bay quota could influence Canada’s ability to argue against the proposal, Prentice said.

But it was clear that hunters, and many of the board members, would be swayed in favour of a quota cut if hunters received financial compensation

If the hunters were angry and frustrated, so was Drikus Gissing, the GN’s head of wildlife.

“I don’t know how to bridge that misundertanding” about polar bear management, he said as the board entered its ninth hour of discussions.

The recommendation of the NWMB, which was to be made in camera following the end of the special meeting on Sept. 30, will go to Nunavut’s environment minister.

Among the possible options that could see the quota stay the same is a recommendation that the desired polar bear population of Baffin Bay is much smaller than 2,000.

This could be an interim measure until a new polar bear survey can be carried out and would allow for a quota of at least 105 animals for hunters in Pond Inlet, Clyde River and Qikiqtarjuaq.

Greenland’s current quota is 68, and to keep the target population at 1,500 polar bears in the Baffin Bay, the combined sustainable harvest should be only 90 animals and even then, the GN said, the population could drop.