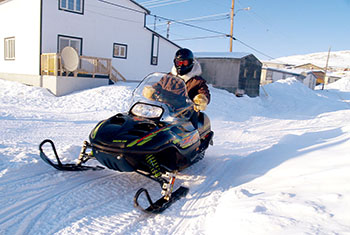 A snowmobile rider along a snowmobile trail in south Iqaluit near the beach. The trail is a major thoroughfare for hunters and others to reach Frobisher Bay from within the city. (PHOTO BY CHRIS WINDEYER)

The city of Iqaluit has taken its first steps toward establishing a formal system of snowmobile trails.

The request for proposals has gone out for companies to map the informal trails that are presently in use, and to create a plan for a system of trails that the city would maintain.

Iqaluit’s director of planning and lands Michèle Bertol said many of the current snowmobile routes pass through private property, which was appropriate when Iqaluit was smaller.

But as the number of snowmobiles and other vehicles increases, the present situation is becoming more dangerous.

“They (snowmobilers) pass through people’s lots any which way,” she said. They pop out on the street from any point so it’s difficult for drivers and pedestrians to anticipate their presence.”

Bertol’s eventual aim is for the city to come up with a trail system that the city would keep clear and include in official city maps.

At this early stage, Bertol could not know what eventual shape the snowmobile trail might take.

The RFP says that the focus of the system should be on giving easier access to hunters traveling in and out of the city.

But it also needs to provide available routes for regular in-town riders to reach key locations such as the stores, hospital and post office.

By way of example, Bertol said it might be a loop trail around the community, with access points in the outlying neighbourhoods.

No present system exists to keep the city’s public works department from dumping snow onto trails after they clear it from the city streets.

Bertol said part of having an established trail system is that the city would know exactly where the official routes are so snow would not be dumped in a way that blocks travel or reduces visibility.

At present, snowmobilers who cross the road near high snowdrifts run the risk of a collision with a much larger vehicle whose driver did not see them and have time to stop on the slippery roads.

Where snowmobile trails cross roads, the crossing would be clearly marked both for snowmobilers and drivers.

“There will be signage saying that it is a snowmobile crossing so the driver will have to be aware that there is a snowmobile that could potentially cross the road at that point,” she said.

Similar signage already exists where the snowmobile trail parallel to Federal Road intersects the road in front of the Nunavut Court of Justice building.

Vehicle drivers will have the legal right of way at such intersections.

Bertol said establishing specific road crossings means the city would be able to make them safer and more convenient for machine riders.

For example, in places where the road is next to a slope, the crossing could include a gravel ramp leading up to the crossing.

The DJ’s Specialties corner is such a snowmobile crossing, and one that Bertol has her eye on for such a modification.

That would allow hunters with loaded qamutiit to stop and safely wait for a clear intersection to cross.

Without such ramps, when a laden snowmobile stops on an uphill slope the engine struggle to get the heavy machine and qamutiik moving again, which is dangerous in the middle of crossing the busy Ring Road.

So it’s easier for riders to blast across the crossing and risk a collision rather than stop on the uphill slope just before the road.

Such a system might also open up routes that are presently unavailable because of the water and sewage pipes that riddle the city’s green spaces.

Bertol said the plan could include creating crossing places across the pipes, by cutting a concrete culvert in half, laying it across the pipe and establishing a gravel ramp on either side.

Developing the plan will involve consultation with hunters, elders, Bylaw, Public Works the general public and city council, state the terms of the RFP.

Preliminary designs will be made public for public comment before a final design.

The RFP states that the contract should be awarded by April 2, and a final design is due by July 16.

Bertol said the contractor will have to get to work as soon as the contract is awarded so they can map the existing trails before the end of this snow season.