Inuit health a priority for next phase of ArcticNet 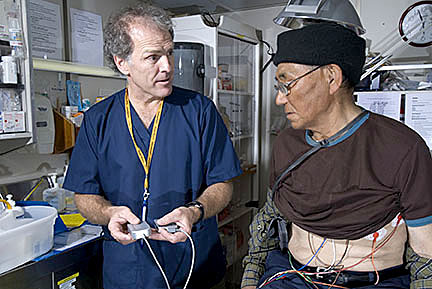 Researchers, funded with a $10 million IPY contribution, surveyed the health status of thousands of Inuit from Nunavut, Nunatsiavut and the Northwest Territories in 2007 and 2008. Most of the data has yet to be released to the public. (FILE PHOTO)

OTTAWA— The impact of climate change in the North will remain the guiding force behind the next seven years of ArcticNet, but Inuit will increasingly influence how we gauge that impact and what gets studied.

A Canada Excellence Research Chair in Inuit health is crucial, he said, for making robust use of the massive database of Inuit health statistics compiled during the Qanuipitali survey conducted in 2007 and 2008.

Turning those numbers into useful information for policy makers and health providers is a priority, he said.

Hanson spoke on the opening day of the conference to remind researchers that science for the sake of science is no longer appropriate in Canada’s Arctic.

Inuit want to do more than drive the snowmobiles. They want to direct research and be instrumental in turning results into government policy and programs that benefit Inuit, she said.

“Thickness of ice is definitely important too but we continue to lag behind in all health indicators in comparison to the rest of Canada and while the world is talking about climate change and looking to Inuit for answers, Inuit are saying there are other questions that need to be answered as well,” said Hanson in an interview.

Northern science has evolved in the past decade and will continue to do so, with greater input from Inuit and other northerners.

“Ten to 15 years ago, there was this push to include Inuit in research and then it stopped there,” she said.

“So okay, thanks for translating your study into Inuktitut but now what? All too often, projects got shelved without being used for Inuit benefit. If Inuit are going to be subjects and help out with the research, then they want to see actual results.”

ITK’s Inuit Qaujisarvingat, the Inuit Knowledge Centre, is hoping to further that evolution by acting as both a repository of Inuit knowledge and scientific data as well as a liaison between Inuit and the research community.

Announced in January, Inuit Qaujisarvingat’s new and improved website will be launched in January 2011 and will include a polar data catalogue as well as Naasautit, a tool for compiling, describing and monitoring Inuit health statistics.

“Inuit have been Arctic residents for millennia — and will continue to be for decades to come,” said Nickels. “The IQ wants to create a lasting legacy for Inuit.”

One thing the knowledge centre hopes to do is influence the scientific agenda by helping to pair up northern and southern researchers.

The number of Inuit attending conferences like this, being involved in research projects, and even running them, have all increased in the past decade, Nickels said.

A good example of that is a collaborative study between the University of British Columbia and Clyde River’s Ittaq Heritage and Research Centre. Of the dozens of conference presentations I witnessed — from tree line expansion to the flux of atmospheric gases above the Arctic — it was the only session lead by an Inuk, and a nervous one at that.

Gordon Kautuk is Ittaq’s research coordinator. His partner David Flanders, a research scientist with UBC’s Collaborative for Advanced Landscape Planning, was sick and unable to attend the conference, leaving Kautuk alone at the podium.

Clyde River’s Kautuk presented findings from a computer-generated visioning exercise examining the potential impacts of climate change on his home community over the next 40 years to a room full of PhDs.

He explained how hazards, such as rising sea levels, and community priorities, such as being able to walk places in winter, should influence how the community grows and expands.

Clyde River was the only northern town included in the CALP climate change project alongside Vancouver, Calgary and Toronto.

As Kautuk went through the Powerpoint presentation, he was surprised to discover the Inuktitut words had disappeared. “Normally you’d see my language there but they are just blocks,” he said. “I guess you guys don’t have Inuktitut in your system.”

Apparently, there are still a few bugs to work out on the road to making Inuit full research partners.