Nunavut jury must decide between self-defence and cold-blooded murder 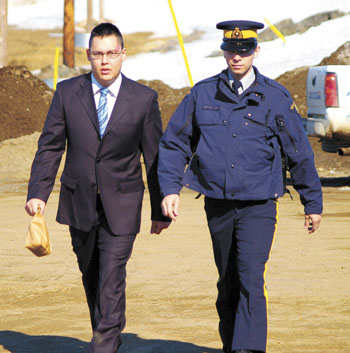 Chris Bishop is led into the Iqaluit courthouse May 26, at the start of his trial. (FILE PHOTO)

Chris Bishop’s fate rests this week with a six-man, six-woman Iqaluit jury who will decide whether, on the early morning hours of Jan. 6, 2007 in Cambridge Bay, he shot five people as part of a cold, calculated plan of revenge or as a desperate act of self-defence against a brutal home invasion.

Bishop, now 24, is on trial in Iqaluit for three counts of second-degree murder in the deaths of Kevin Komaksiut, 21, and Keith Atatahak, 28, of Cambridge Bay, as well as Dean Costa, 29, of Edmonton.

He also faces attempted murder charges in the wounding of Logan Pigalak and Antoinette Bernhardt of Cambridge Bay.

No one disputes that Bishop shot all five people with a military assault rifle, killing three of them, and that the incident arose from a bitter feud that started six days earlier, on New Year’s Eve.

And no one disputes that moments before Bishop shot them, the group broke into Bishop’s housing unit at on Kullik Road in Cambridge Bay to inflict serious harm upon him.

But in their closing arguments, made on the morning of June 7, Crown and defence lawyers disagreed vehemently over Bishop’s motives and whether his actions amount to murder.

Neither lawyer dwelt for long on the massive pile of facts presented during the trial, which started May 26. But in their respective attempts to persuade the 12 jurors, each relied on elaborate rhetorical techniques.

Scott Cowan, Bishop’s defence lawyer, asked the jury to imagine themselves into Bishop’s mind that night, saying no one can understand the young man’s actions without understanding his fear.

“I want you to think back to those times when you’ve been alone and feeling vulnerable,” Cowan said.

Describing the group’s attempted home invasion as the “cowardly, criminal action of a gang of thugs,” Cowan said it was the most primal of all motives that drove Bishop that night: the will to survive.

Bishop fired his first shots inside his bedroom, after the group, all of whom were drunk, smashed his door down and burst into his house. Pigalak, one of two survivors, was later charged and convicted of break-and-enter with intent to commit an offence.

He pointed out that Bishop called the police twice only a few minutes before the incident, but that the police were slow to respond.

In the second phone call to police, Cowan said Bishop was clearly anxious, and he pointed out that a recording of the call played in court caught the intruders’ loud voices and the noise they made banging on Bishop’s door.

Cowan also urged the jury to be skeptical of witnesses who watched part of the incident from outside Bishop’s house, especially the last bullet that Bishop fired into Kevin Komaksiut’s body, saying those witnesses are naturally biased because of their relationships with the three dead men.

For example, he said none of the witnesses mentioned a broken golf club that one of the men carried as a weapon.

But for Paul Bychok, the lead Crown lawyer, the story embedded in that witness evidence forms a mini-narrative that he called the “defining moment” of the case.

He said Komaksiut, already suffering four previous bullet wounds, crawled for a distance of about 40 metres from Bishop’s housing unit and rose to his knees.

Then, Bychok said, Bishop shot the wounded man in the back. Komaksiut fell forward and never moved again.

And Bychok said Bishop acted in a cool, collected manner throughout the affair, calmly aiming then firing 25 shots, 21 of which hit one of the five people who tried to break into his home.

“These are the actions of someone in complete control,” Bychok said.

He said Bishop must have already loaded the illegal 30-shot banana clip that was attached to his 7.62 millimetre Kalashnikov-style rifle, and suggested that he planned to use it.

“The fact that he was armed… shows that he had made up his mind to shoot the men,” Bychok said.

And Bychok pointed out that Bishop calmly smoked a joint after the shootings, then flicked the remains at the body of Dean Costa.

But Cowan said Bishop was likely in a state of shock throughout the incident and afterwards, got stoned on marijuana, both of which could explain any apparent calmness.

And, alluding to the defence of provocation, he told the jury that the shooting of Kevin Komaksiut happened so quickly, “his passions could not have cooled.”

“Everyone has a breaking point… It’s simply, at most, an over-reaction to an unparalleled situation,” Cowan said.

Dressed in a grey suit, white shirt and a light blue tie with narrow diagonal stripes, Bishop sat through the proceeding in a quiet manner, often passing notes to his lawyers.

Justice John Vertes will instruct the jury on the morning of June 3. After that, the jury will retire for deliberations.