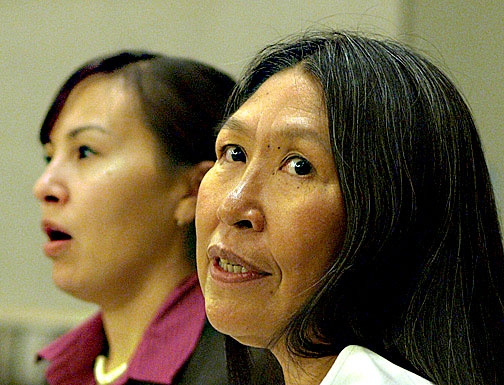 Nunavut’s language commissioner, Alexina Kublu, right, and Sandra Inutiq, director of policy for the Office of the Languages Commissioner, await the start of a hearing at the Legislative Assembly’s Ajuaqtiit standing committee Sept. 29. (PHOTO BY CHRIS WINDEYER)

Nunavut’s languages commissioner will conduct two systemic investigations into government departments this year, as Alexina Kublu’s office begins to make use of new powers under the Official Languages Act and the Inuit Language Protection Act.

Kublu said her office will make use of its new investigative powers to see how well the departments of Health and Social Services and Human Resources comply with Nunavut’s new language laws, which came into force last year.

During a hearing of the Ajuaqtiit standing committee on government operations, Kublu heard complaints from MLAs about uniligual elders having to enlist their medical travel escorts — often children and grandchildren — as translators.

“It ends up being a privacy issue if somebody is ‘Oh, can you come and give me a hand’” Kublu told reporters. “Because this might be someone who’s not their grandchild and it’s somebody who they know who can carry out the service of an interpreter.”

“A person’s privacy gets infringed upon when they end up having to rely on the services of someone pretty much off the street,” she said.

The Office of the Language Commissioner has already found the Nunavut government is routinely violating the language acts.

The commissioner’s 2009-10 annual report, presented by Kublu Sept. 29 to the Ajuaqtiit standing committee, says that the GN is failing to provide basic government documents in the Inuit languages and French.

• only 16 out of 64 GN voicemail messages contained use of an Inuit language, and only two contained French;

• 100 per cent of GN news releases were issued in English, only 85 per cent came out in Inuktitut, 66 per cent in Inuinnaqtun, and 60 per cent in French;

• all GN policies were available in English, yet only 42 per cent were in Inukitut, 11 per cent in Inuinnaqtun and nine per cent in French.

This situation has a serious impact on Inuit working in government, Kublu said.

“You think in the language that you’re speaking. If you think English in the workplace, you’ve got to think it through: ‘Okay, how am I going to say this in Inuktitut?’”

But the state of Inuktitut in the home also worried MLAs. Nanulik MLA Johnny Ningeongan said it’s becoming harder for younger generations of Inuit to understand and converse with elders.

“We’re moving away from our traditional words,” he said. “That could be an indicator that our language is declining.”

She also complained about the lack of CBC Radio programming available in the Netsilingmiut dialect.

“If we’re going to keep Inuktitut alive it has to be (spoken) in the homes, especially in the Kitikmeot,” she said.

Kublu also touched on the controversial issue of standardizing Inukitut.

She said it’s “an emotional issue” but the Office of the Language Commissioner is not going to attempt to enforce any standardized dialect.

Kublu said the Department of Culture, Language, Elders and Youth’s Inuit language authority, Inuit Uqausinginnik Taiguusiliuqtiit, will only develop standardized words for technical terms. She said the authority will also not push for the elimination of Inuktitut syllabics in favour of Roman orthography.