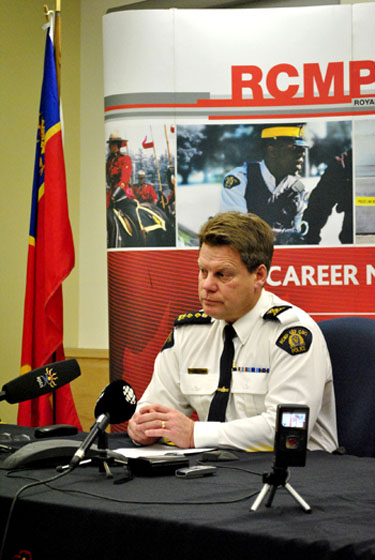 Chief Superintendent Steve McVarnock: “These members were not pulled from the community for something they did or did not do. They experienced something very traumatic….” (PHOTO BY JIM BELL)

Following one of the worst periods of violence ever seen in Cape Dorset, Nunavut’s top police commander has granted a special health break to all four members of the community’s RCMP detachment.

“These members were not pulled from the community for something they did or did not do. They experienced something very traumatic and this is a normal departmental process,” Chief Superintendent Steve McVarnock, head of the RCMP V division in Nunavut, told reporters Oct. 15.

• a nine-hour standoff this past June 23, in which a 20-year-old man sat on the front steps of his housing unit pointing a rifle at himself;

• a young man of 18 barricaded himself into a house July 28 and fired rounds in the direction of children after 22 liquor orders arrived on a single flight and the entire detachment worked 24 hours without sleep;

• a violent episode Sept. 21, in which a man stabbed his uncle in the head and then killed his step-brother with a firearm, leading to charges of second degree murder and aggravated assault against a young man of 18;

• a shooting rampage and standoff this past Oct. 10 that led to the death of a 23-year-old man and the laying of 13 criminal charges, including second degree murder, against his 19-year-old brother;

• a shooting rampage in the early morning hours of Oct. 13, when two 15-year-old boys fired rounds at houses and exchanged gunfire with police — one boy now lies in hospital with a non-life-threatening wound to the side of his torso, while the other boy sits in custody awaiting charges.

Another armed standoff in Repulse Bay this past Sept. 28 created even more pressure for Nunavut RCMP members.

In that community, a 19-year-old man barricaded himself inside a house and fired shots at police, causing the closure of a school and retail store. The man surrendered after seven hours of negotiation.

But for Cape Dorset’s four-person detachment, the most heart-chilling moment occurred Oct. 10, when the family of one RCMP member arrived home after preparing for a Thanksgiving dinner.

There they found a bullet lodged in their bathroom.

“When the threat comes right into the residence, it just exacerbates the fear and the worry that the family members have and it also impacts on the member because that home is your castle. It’s your peaceful resort at the end of your shift,” McVarnock said.

“You ask the question: what would have happened if I was in the house when that round came through?”

McVarnock said an investigation will reveal if the bullet was fired intentionally at a police residence or if was the random product of a reckless shooting spree.

On Oct. 10, the day of the most recent homicide, a man shot a dog and a raven, then barricaded himself inside a house in which another man was later found shot to death.

“This is something that the average person does not experience in their lifetime,” McVarnock said.

The Oct. 10 homicide-standoff and the Oct. 13 shooting spree did not involve the abuse of alcohol, he said, although earlier bouts of mayhem in Cape Dorset did involve intoxicated people.

And he said the departure of the four regular members is not related to the Oct. 13 shooting of the 15-year-old boy and that V Division made the decision to bring them out following the Oct. 10 homicide-standoff.

While the four Cape Dorset members receive an assessment of the trauma they’ve suffered, in what McVarnock calls “an advanced health intervention,” five other RCMP members, including an officer with previous experience in Cape Dorset, will replace them during their absence.

One team, made up of major crimes investigators, is gathering evidence related to the Oct. 10 homicide.

McVarnock said their probe will likely wrap up by the end of this weekend, after which investigators will leave the community, but return in the future to do follow-ups.

The other team, made up of RCMP members from other jurisidictions, will investigate the Oct. 13 shooting of the 15-year-old boy. An officer from the Ottawa Police Service will oversee their work.

“He will monitor the investigation and how it’s being conducted to ensure it’s being done in an unbiased, transparent manner and that everything that’s supposed to be done is being done,” McVarnock said.

He also said he’s “thankful, pleased, and grateful” that the young boy was not seriously injured.

As for firearm safety and gun control in Nunavut, McVarnock said the presence of unsecured long guns in many homes is a big problem.

“Why, or how, do two young people get access to firearms, after one o’clock in the morning in a small community, and they’re able to discharge rounds in a reckless manner from those long barrelled firearms?”

He also said information stored in the national long-gun database was useful to RCMP members when they responded to the Oct. 10 homicide and standoff — because it told them how many firearms were stored in the shooter’s house.

McVarnock said the RCMP will work with community leaders in Cape Dorset to help them cope with the violence in the community, but he said the police can’t do everything.

“It takes community leadership right down to the individual. We could put 12 officers in there year-round, but if there is no respect for firearms and no respect for alcohol, all we’re doing is recycling the problem,” he said.

“I don’t care how many officers you have there. You’re not going to change anything if the community doesn’t want change.”

The current crisis in Cape Dorset has erupted in a year in which Nunavut itself suffers from a crisis of violence that’s putting pressure on all parts of the justice system, including Crown and defence lawyers, the correctional system, and the police.

In 2010, Nunavut has so far suffered six homicides and 26 suicides. The territory’s battered justice system must now process 13 homicide charges that have yet to be tried or otherwise resolved in court.

• For the record: Nunavut’s RCMP commander comments on the crisis in Cape Dorset