“The moment of discovery was, of course, exciting” 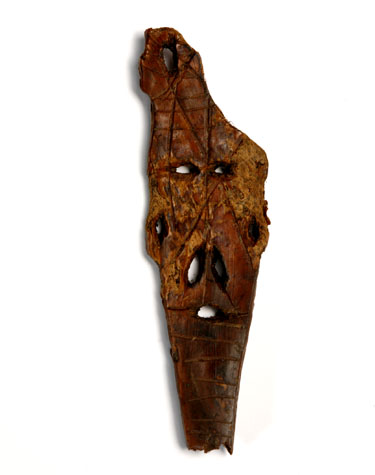 A Quebec archeologist has unearthed the ghostly carving of a face left buried on a remote Arctic island inhabited nearly 1,000 years ago by the long-lost Dorset, or Tuniit, culture — the people who disappeared from the eastern Arctic when the ancestors of today’s Inuit arrived in what is now Canada.
(PHOTO BY ROBERT FRECHETTE, AVATAQ CULTURAL INSTITUTE)

OTTAWA — A Quebec archeologist has unearthed the ghostly carving of a face left buried on a remote Arctic island inhabited nearly 1,000 years ago by the extinct Dorset culture, the people also known as the Tuniit, who mysteriously vanished from Canada’s North after the ancestors of modern-day Inuit arrived in this country.

The small, elaborately sculpted “maskette” — possibly worn as an amulet by a shaman serving as a Dorset tribe’s guide to the spiritworld — is believed to have been made from walrus ivory and was found on one of the Nuvuk Islands at the northwestern tip of Quebec’s Ungava Peninsula.

Traces of the long-lost Dorset people, who are known to have evolved an artistically advanced society despite their harsh Arctic living conditions, are among the most prized discoveries in Canadian archaeology.

And the carved face, possibly meant to depict a female elder who provided leadership to her community, represents a particularly evocative image, with ears, eyes, nose and mouth all clearly defined on the elongated piece of ivory.

“It may have had some kind of shamanic meaning, but of course we can only offer various possible explanations,” Susan Lofthouse, an archeologist with the Montreal-based Avataq Cultural Institute, told Postmedia News.

“Alternatively it could have served as a toy, or some kind of good luck amulet.”

Measuring just five centimetres in length, the object was discovered last year during a dig at a known Dorset dwelling site by a group of Lofthouse-led Inuit high school students from nearby Ivujivik, along with graduate students from Universite Laval and Universite de Montreal.

“The moment of discovery was, of course, exciting,” Lofthouse recalled. “I was helping one of the teenagers, Siaja Paningajak, excavate her square, and suddenly the maskette was uncovered.”

Lofthouse noted that other Dorset depictions of human faces have been found over the years, but “none had the same level of detail that we can see in the Nuvuk Islands maskette.”

Particularly intriguing is the possibility that horizontal lines etched below the figure’s mouth could represent facial tattoos — a decorative art practiced by ancestral Inuit that may also have been used by the Dorset.

“I do like the idea that (the maskette) could represent a woman, since distinct depictions of women are so rare in the Dorset archaeological record,” said Lofthouse.

“Historically, Inuit women wore facial tattoos — in some areas this was still practiced in the last century,” she added. “But we have no evidence one way or the other to tell us that Dorset women did the same thing.”