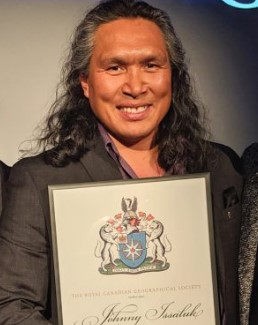 Johnny Issaluk has been stripped of his Order of Canada membership, Rideau Hall has announced. Issaluk is pictured here in May 2019. (Photo by Nick Walker/Canadian Geographic)

Advisory council said there were ‘grounds for termination’: Rideau Hall

Actor and athlete Johnny Issaluk is no longer a member of the Order of Canada.

Gov. Gen. Mary Simon stripped Issaluk, who is originally from Chesterfield Inlet, of the honour on Aug. 31, according to a notice from Rideau Hall released Saturday.

The notice does not provide reasons for terminating Issaluk’s membership, but the removal comes two years after Nunavut filmmaker Alethea Arnaquq-Baril alleged Issaluk behaved in a sexually inappropriate way toward her at a party.

Issaluk starred in the 2009 short film Inuit High Kick, which was directed by Arnaquq-Baril.

Several other women have since come forward with accusations of sexual misconduct against Issaluk, prompting him to issue a written apology in 2020.

Issaluk was not charged in connection with any of those allegations.

An appointment to the Order of Canada may be terminated by the governor general on the recommendation of an advisory council.

In an email to Nunatsiaq News, the Office of the Secretary to the Governor General declined comment on the specifics of the case, but said the Advisory Council for the Order of Canada found there were “grounds for termination.”

The Order of Canada is considered to be the country’s highest civilian honour.

Issaluk was appointed in 2019 for his contributions as an athlete, actor, educator and Inuit ambassador.

As an actor, he starred in some high-profile productions such as AMC’s The Terror, the BBC program The Misadventures of Romesh Ranganathan and the film Indian Horse. He was also an accomplished athlete.

This story has been updated with comment from the Office of the Secretary to the Governor General.

Correction: This story has been updated to correct the name of the film Issaluk starred in, in 2009.