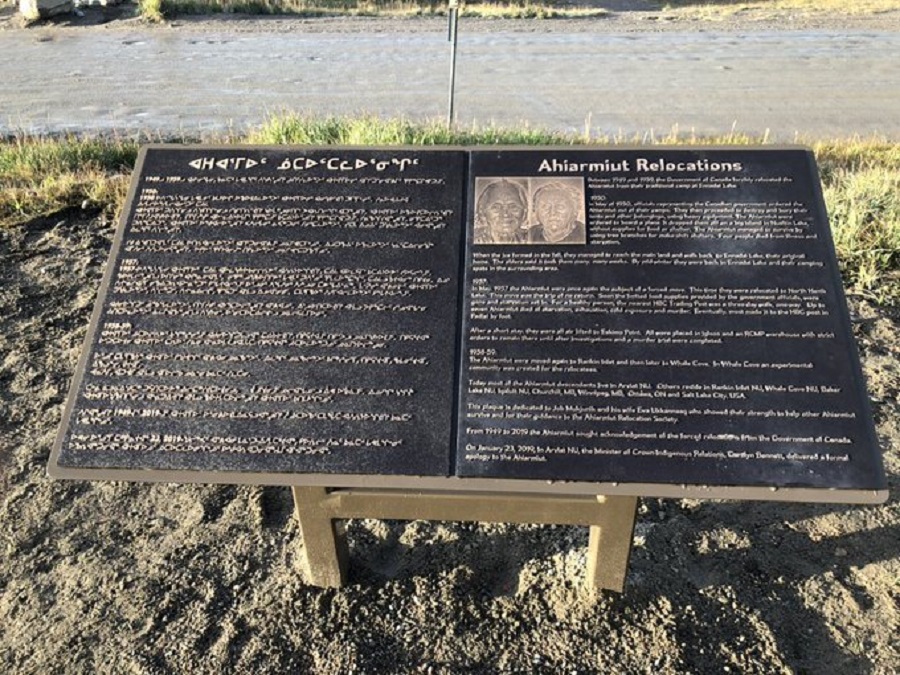 The new two-panelled plaque—one side in Inuktitut and the other in English—tells the story of the Ahiarmiut, starting from the first relocation in 1949. (Photo courtesy of Shelton Nipisar) 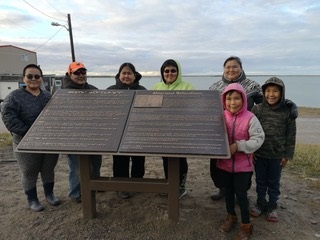 Annie Amaujaq, left, president of the Ahiarmiut Relocation Society, is pictured with her siblings and other family members on Sept. 2 behind the new dedication plaque. The structure was finally installed this summer beside the Arviat RCMP detachment, facing the harbour where the Ahiarmiut first landed in the community in February 1958. (Photo courtesy of D. Serkoak)

More than 60 years after a group of Kivalliq Inuit were relocated to the shores of western Hudson Bay, a new plaque has been erected to mark their story.

The Ahiarmiut, a group of inland Inuit now largely based in Arviat, launched a process in 1998 to seek acknowledgement and compensation from the federal government for the forced relocations from their homelands around Ennadai Lake through the 1950s.

The group reached a $5-million settlement with Ottawa in 2018. In 2019, Crown-Indigenous Relations Minister Carolyn Bennett travelled to Arviat to make the official apology to 21 surviving Ahiarmiut relocatees, their families and community members.

Many of those relocatees settled in Arviat, where they were finally relocated in 1957, while others eventually moved to Whale Cove or Rankin Inlet.

“I wanted the plaque to be in the exact place where officials put us that day, on the RCMP ground overlooking the sea ice,” said David Serkoak, a founding president of the Ahiarmiut Relocation Society.

“We couldn’t get it installed last year, for various reasons, and this was the summer to do it.”

Serkoak was born in 1952, shortly after Ahiarmiut had first been relocated from their traditional camps at Ennadai Lake to Nueltin Lake, with no supplies or shelter.

He played a major role in preserving the story of the Ahiarmiut and securing the 2019 government apology and compensation for relocatees.

The two-panelled plaque—one side in Inuktitut and the other in English—tells the story of the Ahiarmiut, starting from the first relocation in 1949.

The plaque features images of Job Mukjunik and Eva Ukkannaaq, two Ahiarmiut who died before they could hear the official apology.

Their accounts of the relocations were key to piecing together the story of the Ahiarmiut, Serkoak said, and the text on the plaque is largely based on their first-hand accounts.

“I decided I wanted to do the wording myself,” Serkoak said. “They’re not my words, but those of other elders and my parents, from what they told me.”

“It makes it very special for me.”

Serkoak now lives in Ottawa, and hopes to be able to travel home to Arviat later this year to see the plaque in person.

The unveiling of the plaque is also bittersweet for Serkoak, whose parents never lived to see the apology. Serkoak’s brother, Silas Illungiayok, witnessed the apology but died in late 2019.

That leaves fewer than 20 surviving Ahiarmiut relocatees. Only one, 82-year-old Mary Anowtalik, was an adult at the time of the relocations.

The English-language text on the plaque states:

Between 1949 and 1959, the Government of Canada forcibly relocated the Ahiarmiut from their traditional camp at Ennadai Lake.

In May of 1950, officials representing the Canadian government ordered the Ahiarmiut out of their camps. They then proceeded to destroy and bury their tents and other belongings, using heavy equipment. The Ahiarmiut were ordered to board a plane. It dropped them off on a big island in Nueltin Lake, without supplies for food or shelter. The Ahiarmiut managed to survive by using tree branches for make-shift shelters. Four people died from illness and starvation.

When the ice formed in the fall, they managed to reach the main land and walk back to Ennadai Lake, their original home. The elders said it took them many, many weeks. By mid-winter they were back in Ennadai Lake and their camping spots in the surrounding area.

In May, 1957 the Ahiarmiut were once again the subject of a forced move. This time they were relocated to North Henik Lake. This move was the trip of no return. Soon the limited food supplies provided by the government officials were gone and starvation set in. For a healthy person, the nearest HBC Trading Post was a three-day walk, one-way. Up to seven Ahiarmiut died of starvation, exhaustion, cold exposure and murder. Eventually, most made it to the HBC post in Padlei by foot.

After a short stay, they were all air lifted to Eskimo Point. All were placed in igloos and an RCMP warehouse with strict orders to remain there until after investigations and a murder trial were completed.

The Ahiarmiut were moved again to Rankin Inlet and then later to Whale Cove. In Whale Cove an experimental community was created for the relocatees.

This plaque is dedicated to Job Mukjunik and his wife Eva Ukkannaaq who showed their strength to help other Ahiarmiut survive and for their guidance to the Ahiarmiut Relocation Society.

From 1949 to 2019 the Ahiarmiut sought acknowledgement of the forced relocations from the Government of Canada.

On January 23, 2019, in Arviat NU, the Minister of Crown-Indigenous Relations, Carolyn Bennett, delivered a formal apology to the Ahiarmiut.