“It’s about time. It makes me so proud.” 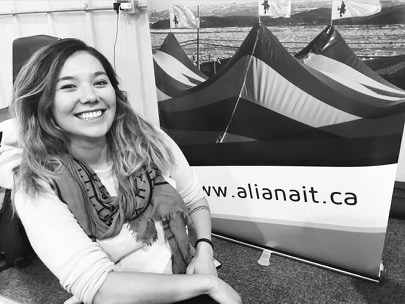 Alannah Johnston, 29, was officially welcomed aboard as Alianait’s new executive director this month—the first Inuk to lead the organization. (Photo courtesy of Alianait)

Alannah Johnston is no newcomer to Nunavut’s performing arts scene.

You can find her at almost any live show in Iqaluit, or any stage featuring Inuit talent in the territory or country. There’s a good chance she even organized it herself.

Johnston first joined Iqaluit’s Alianait arts festival in late 2016 as a festival coordinator, filling in while then-director Heather Daley was on holidays. Johnston was helping to coordinate a collaborative show with the Embrace Life Council, featuring the duo Twin Flames.

Johnston was working at the time for the Government of Nunavut in its Human Resources Department, a job she enjoyed. But with most of her family and friend network based in the arts—her sister Aviaq is an author and her brother Anguti is an actor and director—Johnston felt the pull to move into a more creative field.

Johnston, 29, was officially welcomed aboard as Alianait’s new executive director this month—the first Inuk to lead the organization.

Since 2017, she’s essentially been in training to take on the role, and she’s proved her mettle, showing she has the resolve and vision to lead one of the territory’s biggest arts organizations.

Johnston has helped grow the number of Inuit and Indigenous performers filling the festival’s line-up each year, something she says remains an ongoing goal for the organization.

She also takes credit for managing one of Alianait’s most difficult years, in 2019, when a series of fires in Iqaluit and an active shooter situation threatened the festival’s plans. Johnston helped come up with a safety plan for performers, staff and volunteers and waived ticket prices for its closing show.

Though she’s not entirely new to the role, Johnston said she’s had an enthusiastic welcome since she officially took on her new title.

“I think it’s pretty awesome,” Johnston said. “It’s about time. The amount of support from the Inuit community has been crazy. It makes me so proud.”

Johnston has always seen Alianait as a venue to promote Nunavummiut and Inuit artists. In that sense, she wants to do more of just that, and she uses her presence at industry events to ensure Inuit talent is seen and heard.

In her time with the organization, Johnston has learned more about how Alianait got its start, thanks to the efforts of a number of different community organizations. She wants to bring back more of that involvement, she said, to ensure the festival reflects the broader community.

A global pandemic has, of course, created a whole host of new challenges for Johnston and her fellow festival organizers. The organization opted to cancel Alianait’s summer music festival this year, while they look ahead to potentially offering a series of events this fall, if regulations allow.

And Alianait’s Embrace Life tour has been postponed until January 2021.

In the meantime, Alianait has offered some entertainment online, livestreaming concerts by well-known performers like Agaaqtoq, Becky Han and Angela Amarualik from its Facebook page.