Nunavut’s churches adapt to life during a pandemic 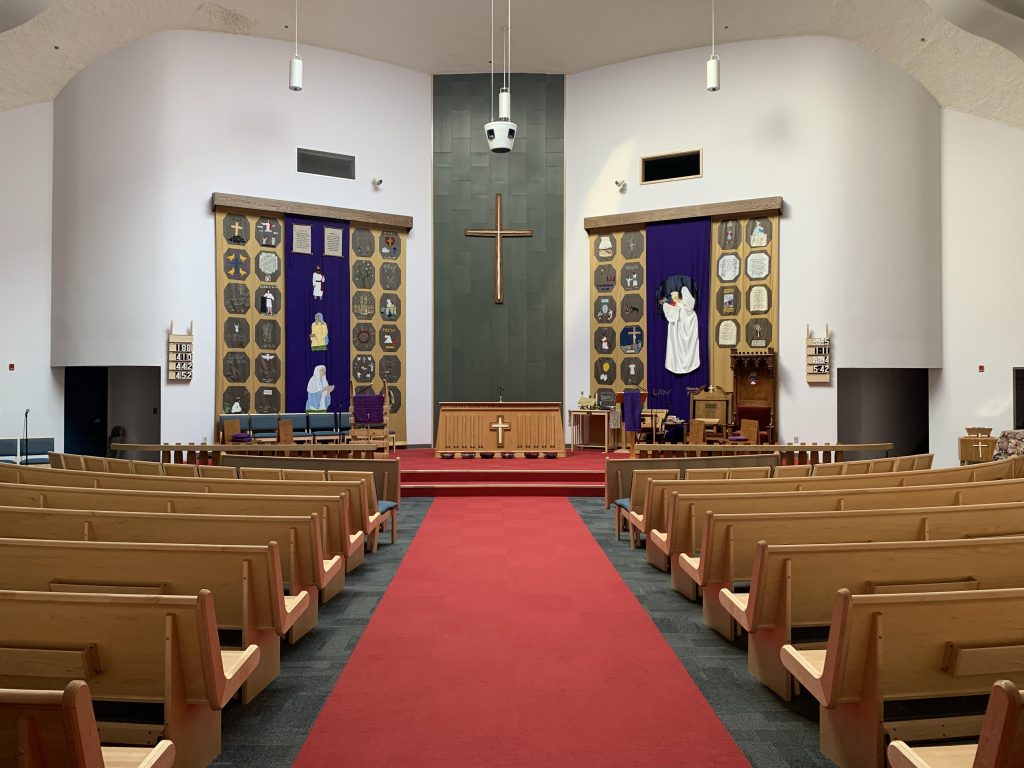 Church pews across the territory, such as those seen here inside St. Jude’s Cathedral in Iqaluit, have been sitting empty for weeks, yet congregations are still finding ways to attend services remotely through solutions such as Facebook Live. (Photo courtesy of Joey Royal)

Three weeks ago, Pastor Nathan Jones of the Kangiqliniq Baptist Church in Rankin Inlet did something he never imagined he’d do: conduct a service online via Facebook Live.

Days earlier, churches across Nunavut and Nunavik suspended their services amid growing concerns about COVID-19, a decision that was followed by a complete ban on public gatherings by the Government of Nunavut on March 23.

As a result, Jones took to the internet and, for the first time in his 13-year career as a pastor, gave a service to a near-empty church, with only his family in physical attendance.

“I guess I have a better appreciation for all of those in TV and media,” said Jones with a laugh.

“You’ve really got to just forget all the other stuff that’s in the room or other people and just focus at the camera because that’s the most important part.”

But Jones isn’t the only one learning on the go.

In an effort to find ways to continue to support and minister to their congregations, Joey Royal, a suffragan bishop for the Diocese of the Arctic, and church leaders from across the Arctic have been meeting daily.

“Everyone’s just trying to figure out as they go,” said Royal, who is based in Iqaluit.

For Royal and others, being Christian and gathering in person is central to their beliefs and not being able to do so poses challenges.

“Nonetheless, we can’t do those sorts of things. So this new way of doing it, with Facebook Live and with Zoom and with YouTube and different things, these are not nothing, they’re significant.”

Despite online workarounds, some services are more difficult to provide during the ban on public gatherings.

“We’ve not been able to have funerals in our church buildings,” said Royal.

“Of course, we have said that we can do services at the graveside with a few people, so long as there’s appropriate social distancing, and that’s very hard on people.”

Balancing people’s safety and their grief is also hard for Royal, and one solution he’s offered is “if they want a full funeral later on, we can certainly do that, when more people can gather.”

While the ban on public gatherings has made some religious practices more difficult, it’s made others easier to access.

Since broadcasting his first service on Facebook Live over three weeks ago, Pastor Jones in Rankin Inlet says there’s been a very positive community response.

“Our congregation is quite small as it is—you know, 15 to 20 people normally,” said Jones.

“Now we’re getting 600 views or so on each video, which is pretty good.”

Not only has Jones’s audience grown, but he now has viewers also tuning in from outside Nunavut, from places as far away as the United States.

“People that haven’t been able to come in or haven’t chosen to come to an actual service have actually watched and commented,” said Jones.

“I don’t think it is a replacement for gathering physically. Worship in our faith is meant to be something we do together in proximity,” said Royal.

“But nonetheless, yeah. I think there is something to that.”