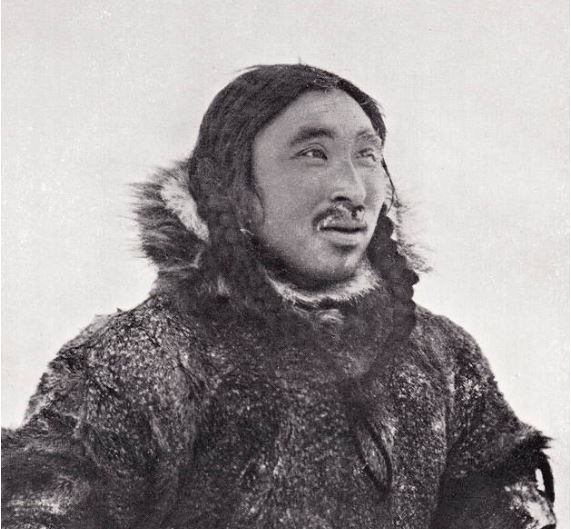 The storyteller Netsit. (Photo from “Knud Rasmussen. The Intellectual Culture of the Copper Eskimos. Report of the Fifth Thule Expedition, Vol. IX,”)

On Oct. 31, 1923, Peter Norberg, the Hudson’s Bay Company manager, hosted a farewell party for Knud Rasmussen and his two Inughuit travelling companions in the house he had erected at Malerualik.

All the Inuit at the post were invited. Rasmussen had spent just over seven months among the Nattilingmiut and it had been a productive time for him, both in terms of ethnographic information gathered – stories, songs, and legends – and material objects purchased or excavated.

The following day, he, Qaavigarsusaq, and Arnarulunnguaq, accompanied by local guides, set out on their long journey westward. They crossed the treacherous ice of Queen Maud Gulf and on Nov. 13 met the first of the Kitdlinermiut Inuit group, the first of the so-called Copper Eskimos, now known as Inuinnait.

These people, Rasmussen wrote, “seemed to live on a constant war footing with all strangers.”

They were the people that the Nattilingmiut had warned him to be wary of.

Rasmussen immediately noticed a marked difference in the way of life of these new people compared with those he had left behind in the east. For one thing, they lived closer to a trading post.

In the home of the first man he visited, Rasmussen noted that “enamel dishes had replaced the fine, blubber-shiny wooden trays that are made of driftwood; aluminium pans took the place of stone pots, and even the handsome Eskimo lamp of soapstone had had to surrender to a shiny basin of tin.” 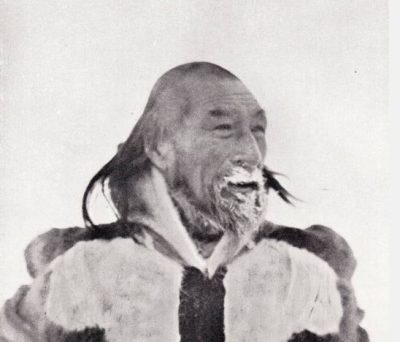 The following day, he and his party reached the Hudson’s Bay Company post at Kent Peninsula, established only in 1920, where they enjoyed the hospitality of Hugh Clarke, “an intelligent and likeable young man,” and his assistant, a Dane named Rudolf Jensen.

There, Rasmussen met another Dane who would join his expedition. This was photographer and film-maker Leo Hansen, who had been sent out by the expedition’s committee to join Rasmussen in the central Canadian Arctic. Hansen would accompany Rasmussen as far as Point Barrow, Alaska, and later rejoin him in Nome.

Rasmussen stayed a week at Kent Peninsula, to read the mail which had accumulated for him there, and to feed and rest his dogs.

On Nov. 22 they continued on to the Inuit camp at Malerisiorfik,  a camp of the Umingmaktuurmiut or Musk-Ox People.

Again Rasmussen commented on the marked difference between these people and the Inuit further east: “One thing that could not fail to be observed at once was the infectiously bright spirits they were always in: they were not only full of fun, they were almost defiantly self-assured and so free in their manners that it was often necessary to keep some of them down a little.”

This joie de vivre was a mixed blessing for the ethnographer. He knew that his time among the Inuinnait would be limited but, he wrote, as a consequence of their enthusiasm, “What I had least of in this joyous snow-hut camp was peace and quiet in which to work. Our hut was always full of visitors, and as they were all fond of talking together it was not easy to concentrate on writing.”

As a result, after a visit to a large settlement of 30 snowhouses at Bathurst Inlet, Rasmussen moved back to Kent Peninsula where Mr. Clarke gave him the use of a company hut where he could work in relative quiet.

Rasmussen convinced a few of the Umingmaktuurmiut – “Those members of the tribe whom I had found would suit me best to work with”– to accompany him back to Kent.

These were an aging shaman, Hiiq, who was “an expert of outstanding merit in mystic matters,” his wife Hikhik, his son Tatilgaq, and a young man, Netsit, only about 20 but recognized as the best story-teller of the group, having been raised by a respected shaman.

Rasmussen found the Umingmaktuurmiut to be “as poets perhaps the most gifted and inspired Eskimos I have ever fallen in with.”

He was not impressed, though, with the shamanic performances he witnessed: “All the seances I attended with the Umingmaktuurmiut were extremely naïve in tendency and performance … The audience is credited with almost fabulous faith in the trustworthiness of the shaman and the actual presence of the spirits … their conjuring tricks were so childish.”

In his report on the expedition, Therkel Mathiassen summed up Rasmussen’s brief time among the Copper Inuit thus: “With the study of the Umingmaktuurmiut in the region of Kent Peninsula, one of Knud Rasmussen’s principal objects on the Expedition, an investigation of the intellectual culture of the Central Eskimos, was on the whole completed. The thing now was quickly to get forward to the Western Eskimos, whose most eastern group lived in the Mackenzie Delta … 2,200 miles from Kent.”

Rasmussen himself wrote, “The distance had to be traversed as rapidly as possible, but there would have to be halts here and there for the purpose of studying the people with whom we fell in.”

They left Kent Peninsula on Jan. 16 with the temperature hovering at -42 C. They travelled on two sleds, Rasmussen and Arnarulunnguaq on one drawn by six dogs, Qaavigarsuaq and Hansen on the other with a heavier load which included the photographer’s equipment, drawn by 10 dogs.

They visited Inuit briefly at Agiaq before reaching Tree River on Jan. 22. Both the HBC and RCMP had posts there. Six days later they left in bitter cold and drifting snow to traverse Coronation Gulf to Cape Krusenstern, where they spent only a day among the Nuvungmiut, “presumptious and restless people.”

They continued on to Bernard Harbour where the HBC post manager was another Dane, Peder Pedersen. Rasmussen had no qualms about spending little time there as it had been the headquarters of the earlier Canadian Arctic Expedition, which had done detailed ethnographic work in the region.

In early February, he spent 10 days at a large hunting camp in Dolphin and Union Strait, and with that his time among the Inuinnait was at an end. It had been brief – only three months.

He left on Feb. 15 on the 900-kilometre sled journey west to the next HBC post at Baillie Island.