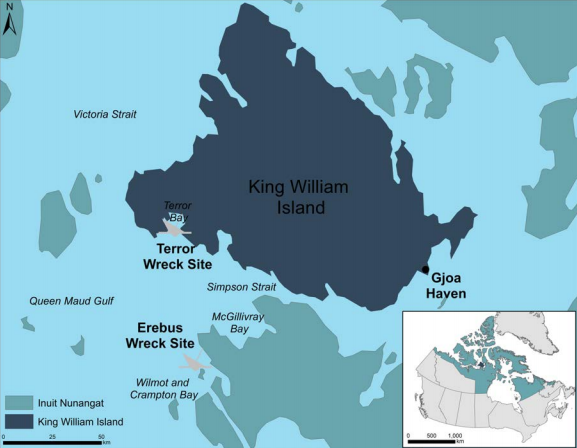 Archeologists are returning to research the Arctic sites of the fabled Franklin Expedition shipwrecks, after a two-year break.

Parks Canada’s underwater archeology team was en route to the wrecks of HMS Erebus and HMS Terror near Gjoa Haven, Nunavut, to conduct work focused on exploration and conservation of the ships, it was announced Thursday.

“The resumption of research at the sites of the HMS Erebus and HMS Terror represents an important opportunity to continue the investigation of the legendary Franklin story,” said Steven Guilbeault, minister of environment and climate change, in a news release.

In 1845, explorer Sir John Franklin and his crew set sail from England with two ships, Erebus and Terror, to cross the last unnavigated sections of the Northwest Passage across the Arctic.

Despite searches over the next 169 years, the ships were believed lost until an expedition led by Parks Canada and aided by Inuit locals discovered the Erebus in 2014 and the Terror in 2016 near Gjoa Haven.

The return of researchers to the national historic sites of the wrecks follows a two-year postponement due to pandemic precautions, Guilbeault said.

The archeological team’s research plans will include mapping and assessing current site conditions of the two wrecks. They will use remotely operated vehicles to carry out below-ice inspections of the sites and surrounding sea floor.

The first dive is expected to happen within days, with logistical support from Inuit Guardians, who help integrate Inuit knowledge into protection and monitoring of site operations. A second dive is planned for later this summer, Parks Canada said.

Their work will build off a previous dive in 2019, when the underwater archeology team, in collaboration with Inuit, recovered more than 350 artifacts from the Erebus.

The dives will also help researchers understand the effects of climate change on marine environments, the minister said.