“Protecting the marine environment and animals is of utmost importance to us,” says ICC’s Lisa Koperqualuk 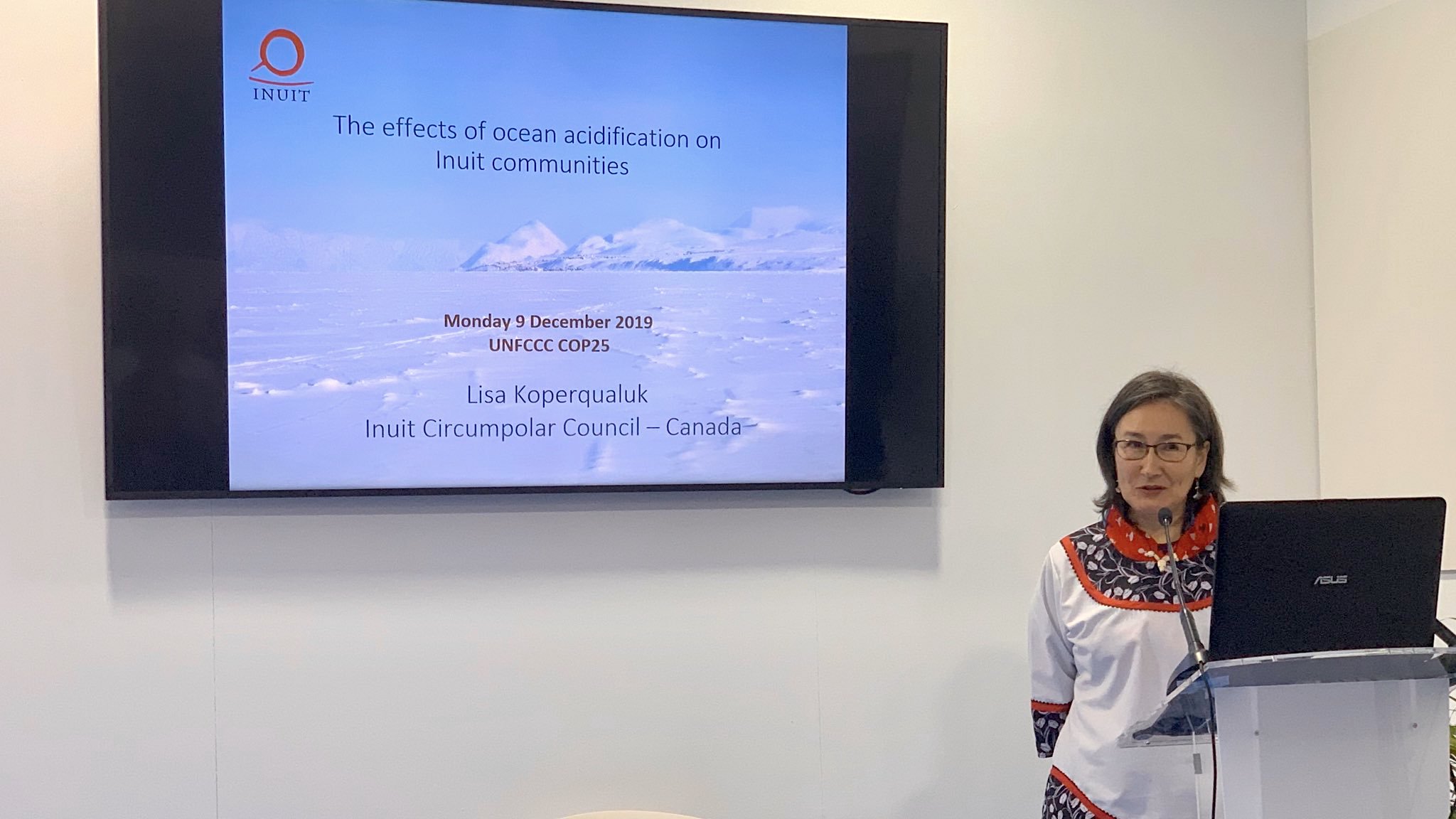 Lisa Koperqualuk, the vice-president of the Inuit Circumpolar Council–Canada, speaks about how ocean acidification affects Inuit communities and their food security, health, and culture at an Arctic Council side event during the global climate talks now underway in Madrid. (Photo courtesy of the Arctic Council)

Inuit must be involved in fighting acidification of the Arctic Ocean through monitoring efforts and sharing their knowledge: that was the message from Lisa Koperqualuk, the vice-president of the Inuit Circumpolar Council—Canada, today during an Arctic Council panel on ocean acidification at the United Nations climate talks in Madrid.

Ocean acidification is taking place in the Arctic Ocean at a rate that’s about two times higher than elsewhere in the world, due to the combination of cold water, sea ice melt and input of freshwater from melting glaciers, those attending the panel heard.

This increased acidity is a problem because it threatens the health of sea life and Arctic residents who depend on those resources.

“Protecting the marine environment and animals is of utmost importance to us,” Koperqualuk said during the side event, which was live-streamed on YouTube.

“We are a marine people who depend on the sea ice, floe edge and polynas.”

Koperqualuk said for Inuit the Arctic Ocean is “our critical infrastructure and our highway to travel on.”

Concern over ocean acidification in the Arctic prompted the Arctic Council to organize the side event called “All Aboard! Tackling Polar Ocean Acidification.”

Participants in the panel also included four scientists, who spoke about how the ocean is heading to a state of acidification that hasn’t been seen in 55 million years, since the time of a mass extinction event in the oceans.

Ocean acidification is occurring now because carbon dioxide released into the atmosphere by the burning of fossil fuels, like coal and gas, is dissolving in the ocean.

Carbon dioxide then reacts with the water to produce carbonic acid.

Ko Barrett, the vice-chair of the United Nations’ Intergovernmental Panel on Climate Change, compared the ocean to a sponge.

And this acidification happens faster in the Arctic Ocean because cold water absorbs more carbon dioxide than warm water.

The increasing amount of fresh water from rivers and melting ice also reduces the capacity of the ocean in the region to neutralize acidification.

These acidic waters mean some sea life, mainly creatures with shells and fish, require more energy to maintain their health.

The possible impacts of greater ocean acidity include reduced growth in small creatures with shells, and some fish being less able to avoid predators, said another panellist, Helen Findlay, a biological oceanographer at Plymouth Marine Laboratory in the United Kingdom.

And there could be other impacts: a 2018 policy document from the Arctic Council’s Arctic Monitoring and Assessment Programme on Arctic Ocean acidification suggested a resulting decrease in Arctic cod abundance could affect its predators, including culturally important species hunted by Inuit, such as ringed seals and beluga.

AMAP called for reduced emissions of greenhouse gases “as a matter of urgency” and more research and monitoring efforts.

The side event on ocean acidification comes as the world’s heads of state and ministers gather in Madrid for the high-level segment of the global climate talks that starts on Tuesday.

Patricia Espinosa, the executive secretary of the United Nations Framework Convention on Climate Change, said the goal of the meeting is to mobilize countries to commit to efforts to curb climate change.

“The world’s small window of opportunity to address climate change is closing rapidly,” Espinosa said. “We must urgently deploy all the tools of multilateral cooperation to make the talks the launch pad for more climate ambition.”

The UN’s current meeting, called COP25, or the 25th conference of the parties who signed the United Nations Framework Convention on Climate Change ratified in 1994, wants to see the world’s nations try to build on previous commitments to reduce carbon emissions.

COP25, where Inuit have been present to draw attention to the impact of climate change in the Arctic, is expected to wrap up on Thursday, Dec. 12.