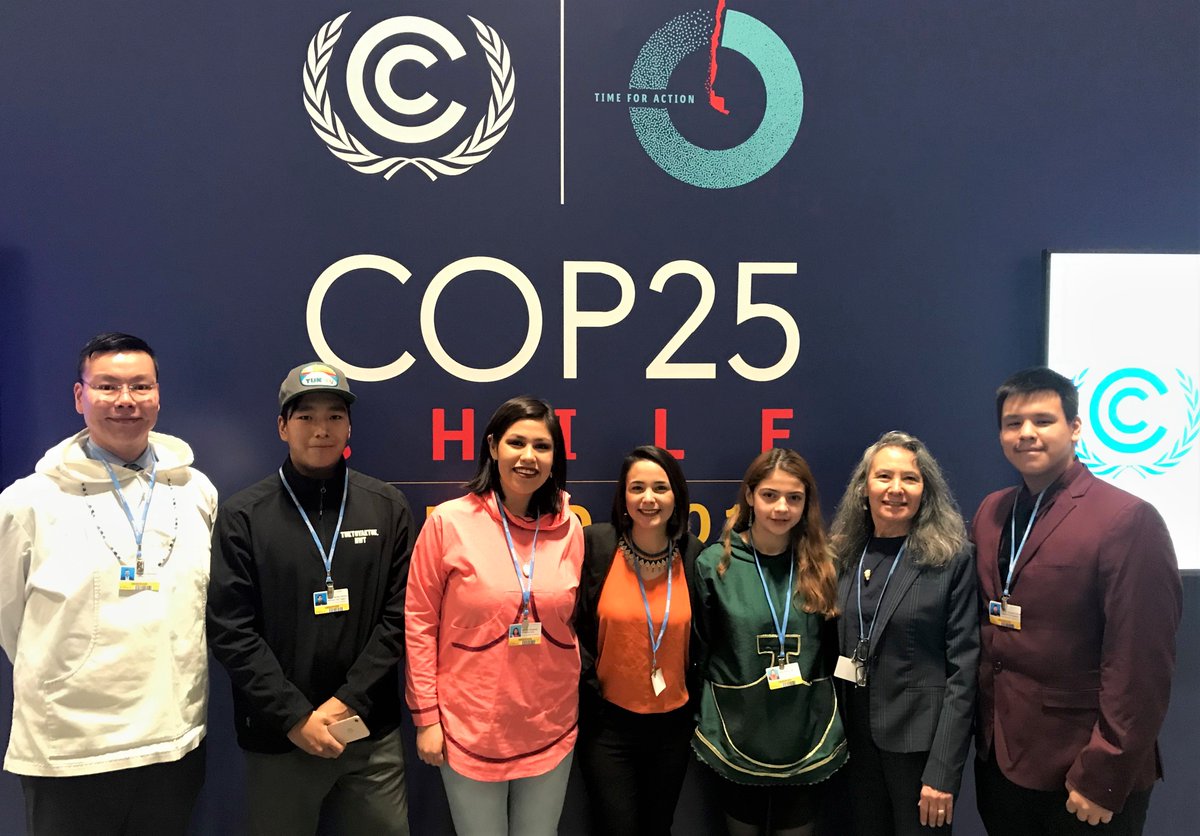 While Inuit representatives attend the United Nations climate talks in Madrid this week and next to draw attention to Arctic climate change, they will have plenty of recent examples of unusually warm weather in the Canadian Arctic to draw upon.

Last month average temperatures from the Northwest Territories to Nunatsiavut were well above normal: in Clyde River, on the northern coast of Baffin Island, the temperature averaged 6.7 degrees Celsius above the norm.

A chief goal of the UN meeting is to find a way to keep the global average temperature from rising more than two degrees C above temperatures recorded at the start of the industrial era in the 1800s.

But a map of November’s temperature anomalies in the Canadian Arctic, prepared by Dalhousie University weather watcher Patrick Duplessis, shows more than two additional degrees of heat overall last month in many places, using a more recent period from 1981 to 2010 as the point of comparison. 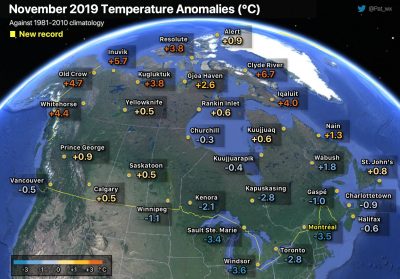 Some of temperature anomalies for November noted by Duplessis include the following:

“For the most part, it wasn’t a month characterized by big temperatures spikes, but rather constantly warm temperatures and no extreme-cold days,” Duplessis said.

The notable warmth in November was part of a warmer-than-average autumn, he said.

And Nunavik also experienced some warm days. On Oct. 12, Kuujjuaraapik was the “hot spot” in Canada, with a temperature of 20.6 C, breaking the previous high temperature record for that date of 19.9 C in 2003. 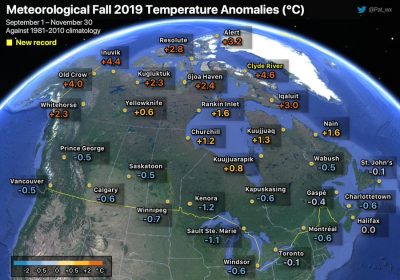 Overall, across the Canadian Arctic, the three-month period from Sept. 1 to Nov. 30 shows temperature anomalies of:

For the planet, 2019 concludes a decade of exceptional global heat, retreating ice and record sea levels, the World Meteorological Organization said today in its annual report on the Earth’s climate.

Average temperatures for the 10-year period from 2010 to 2019 are set to be the highest on record, the WMO said, with 2019 on course to being the  second- or third-warmest year on record.

Along with those higher-than-average overall temperatures during this autumn, there was also less Arctic ice formation.

The average November Arctic sea ice extent was the second lowest on record, at 1,370,000 square kilometres below the 1981 to 2010 average, the US National Snow and Ice Data Center said.

What a beautiful day in #Iqaluit I love the view from my home.
Our bay is usually teeming with activity on the ice by this time of year.
It’s not even close to freezing over today.#Arctic #Ice pic.twitter.com/cQEM69qKTe

The UN’s current meeting, called COP25, or the 25th conference of the parties, will see the world’s nations try to build on previous commitments to reduce carbon emissions.

In his Dec. 2 opening remarks to COP25, Secretary-General António Guterres said “to address the climate emergency, we need a rapid and deep change in how we do business, how we generate power, how we build cities, how we move and how we feed the world. If we don’t urgently change our way of life, we jeopardize life itself.”

But no matter what decisions are taken in Madrid, a UN report released earlier this year said many changes for the Arctic are already “locked-in.”

Even if the world manages to cut climate-warming greenhouse gas emissions in line with the Paris targets, winter temperatures in the Arctic are expected to rise three to five degrees C by 2050 and five to nine degrees C by 2080.