‘No one else went through what Arviat did in the whole territory,’ mayor says 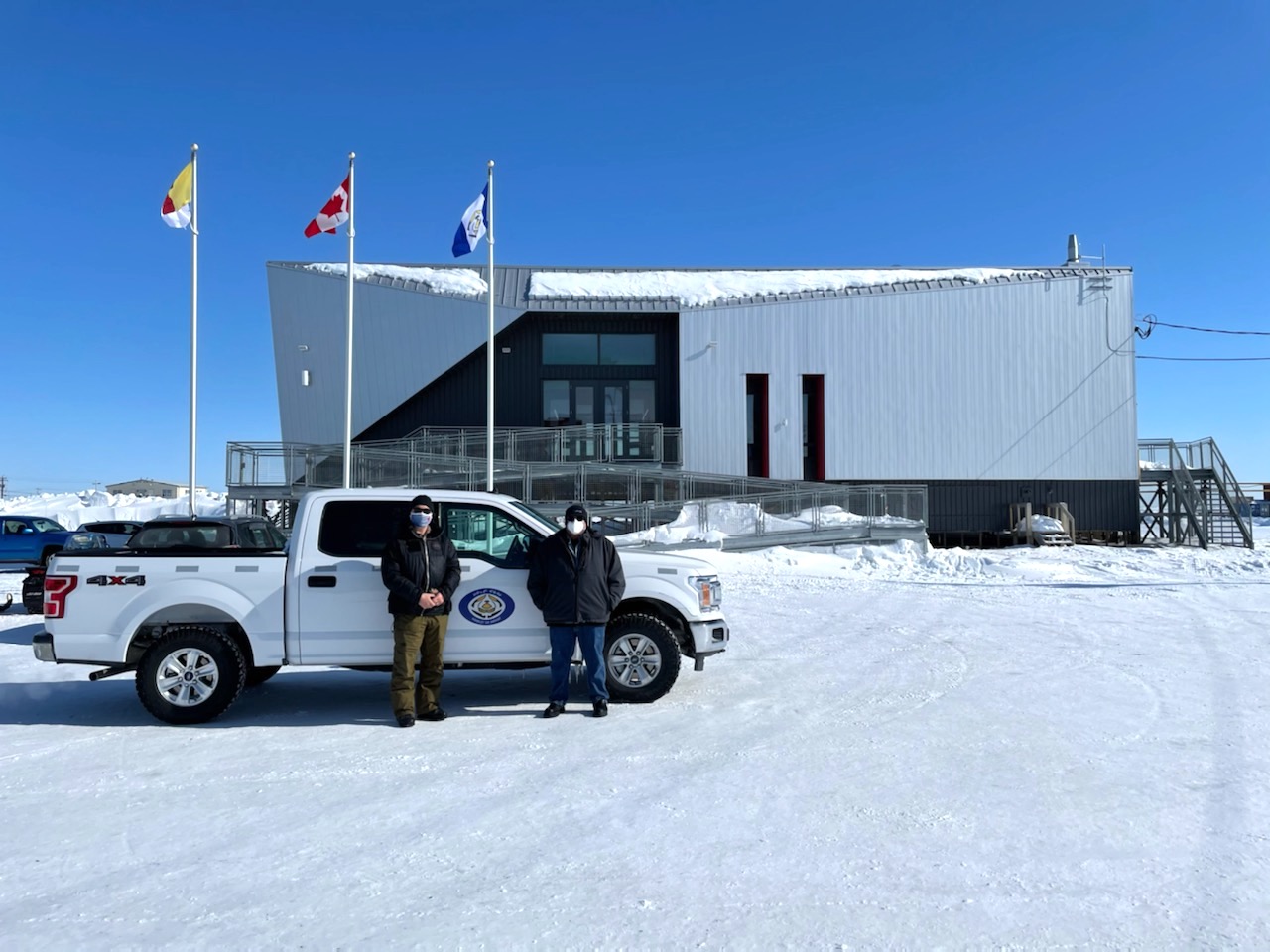 People in Arviat are looking forward to being free of COVID-19, says Arviat’s Mayor Joe Savikataaq Jr., shown here, at the left, and senior administrative officer Steve England in front of the hamlet office. (Photo courtesy of the Hamlet of Arviat)

Arviat, the site of Nunavut’s largest COVID-19 outbreak, is set to be declared COVID-free next week.

This comes about 150 days after Arviat’s first confirmed case was declared Nov. 13, and 28 days since the last to be confirmed in the community of about 3,000.

A big public celebration is not in the works, according to community leaders, but the expected easing of restrictions to allow more visiting between households will alone be “a giant leap for Arviammiut,” said Mayor Joe Savikataaq.

While the pandemic is not going away, Arviat is in a much better situation to face infections now than last November, he said. That’s because many residents have either already had COVID-19 or have been vaccinated against the new coronavirus.

“No one else went through what Arviat did in the whole territory,” Savikataaq said about the number of infections suffered by Arviammiut.

When nearby Rankin Inlet saw its first confirmed COVID-19 case Nov. 11, the Hamlet of Arviat made the decision to immediately shut down.

“We will never know how much those two days saved us,” he said of the time between the community’s initial lockdown and the appearance of the first case.

“The [Nunavut government] was doing its part having the isolation hubs in southern Canada to keep COVID out, but somewhere it made its way in here.”

Back then, Arviat was the first community in the territory to see multiple cases, and that meant Savikataaq and his colleagues had to learn as they went.

The most challenging thing at that time was mitigating fear, he said.

“There were so many unknowns at the time. What got us through at the time was our local radio station and everyone tuned into that for updates and to encourage each other.”

Arviat senior administrative officer Steve England said his role moved into crisis management mode at the hamlet, where there were 60 worried employees.

“We had to get over our fear and replace it with knowledge,” England said. “We got hit hard, and keeping vital services going the first couple of weeks was a very big challenge.”

There was a plan in place to fly in heavy equipment drivers and water truck drivers if needed, but in the end, it wasn’t necessary. The hamlet also didn’t end up needing to seek help from the military.

“We came close, but then recoveries started to kick in,” England said, “and we knew we could make it.”

“It’s another chapter in Arviat’s history, and we’re stronger for it.”

The long haul for municipal leaders is over

Savikataaq says the pandemic has changed him – beyond the fact he uses a lot of hand sanitizer now.

He said he appreciates life more and “how things can change and affect our life.”

During the five-month outbreak in Arviat, days ran into each other, he said.

Savikataaq had to isolate for 22 days at home after his wife tested positive for COVID-19.

“In hindsight, it didn’t really matter because everything was closed. At the time it was uncomfortable, and I was thinking, ‘Why I am under house arrest?’ But I was still busy at home, so it was OK,” Savikataaq said.

Support from family, including Nunavut Premier Joe Savikataaq, and hearing “people on radio encouraging other people” meant a lot to him.

(The Health Department has clarified that the COVID-19 outbreak in Arviat cannot be declared over until more than two weeks after the last person is no longer in isolation. In Arviat’s case that date is April 6. “This means, the declaration that the outbreak is over cannot be made before April 20,” the Health Department said. An earlier version of the story suggested the outbreak could be declared over this weekend.)