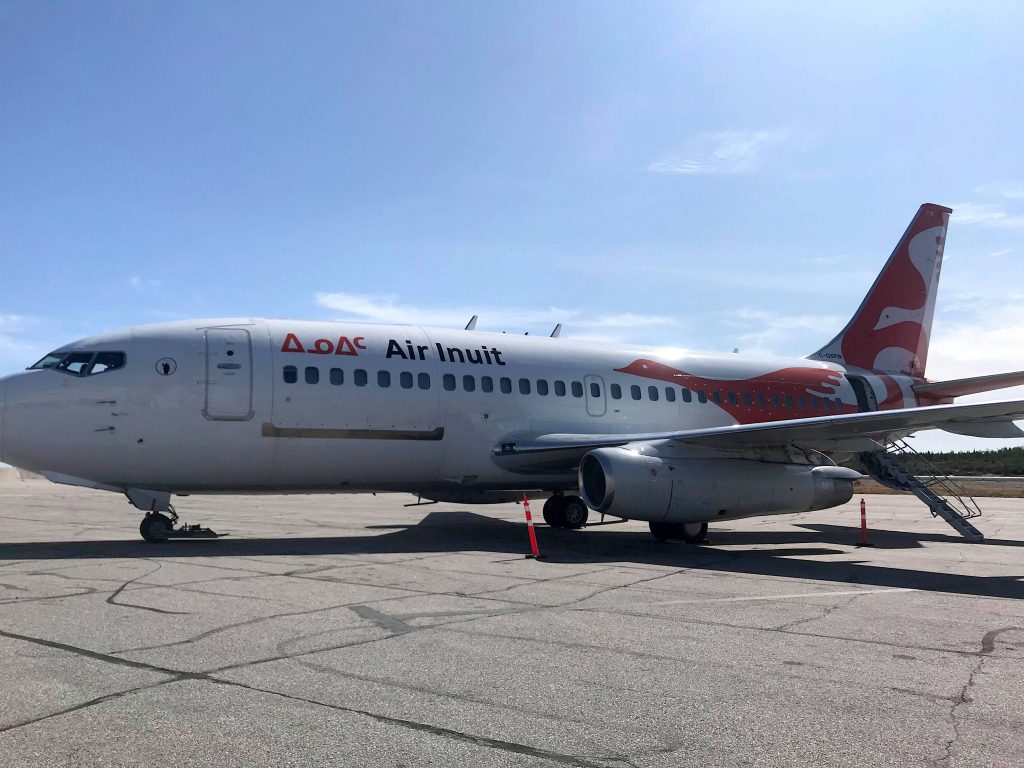 Here’s a look at the Air Inuit Boeing 737-200 on Aug. 24 after it managed to land in La Grande Rivière after its autopilot failed, causing the 38-year-old aircraft to violently pitch. (Submitted photo)

Air Inuit, in a statement posted on Facebook late in the afternoon of Aug. 30, has apologized for an Aug. 24 flight in which violent plane movements injured one passenger and a flight attendant.

“We apologize for this unfortunate incident and thank you for your support,” Air Inuit said on Friday, Aug. 30.

The apology came hours after Nunatsiaq News shared photos that some of the 35 passengers on board had taken, as well as statements about the trauma that some experienced, with one man quoted as saying that when the Boeing 737-200 pitched, “it was very scary, people screaming, crying, praying, food, papers, people flying in the plane.”

In the statement, Air Inuit thanked nurses aboard the plan who helped deal with injuries.

The details related in Air Inuit’s statement are not completely in line with those set out by Flightaware and the online aviation news site the Aviation Herald, which suggest that an autopilot malfunction on the 38-year-old aircraft caused pitches that threw passengers, crew and meals around, not once, but twice during the flight.

Air Inuit said the airline had, as per Safety Management System and Transport Canada regulations, reported the incident to both Transport Canada and the Transportation Safety Board “the same day, shortly after the event occurred.”

The aircraft is back in service, it said.

Air Inuit’s safety investigation confirmed that “while in cruise flight towards the La Grande airport, the autopilot initiated an uncommanded climb,” the statement said.

“This situation caused the pilot to disconnect the autopilot and promptly bring the aircraft back to its planned flight level,” Air Inuit said.

Air Inuit said “this intervention caused the aircraft to jolt, thereby shaking the passengers in the cabin. This resulted in minor injury to one adult passenger and a flight attendant. ”

“While in flight, the two injured parties were assisted by two nurses onboard. Once they arrived at the La Grande airport they were assisted by medical services and released after examination,” Air Inuit said.

The aircraft was serviced, inspected and returned to service the next day, Air Inuit said.

“As a safety precaution, we wish to remind all passengers to always wear their seatbelt when flying on any aircraft. During flight it is possible that undesirable situations out of the carrier or the pilots’ control may occur at any time.”