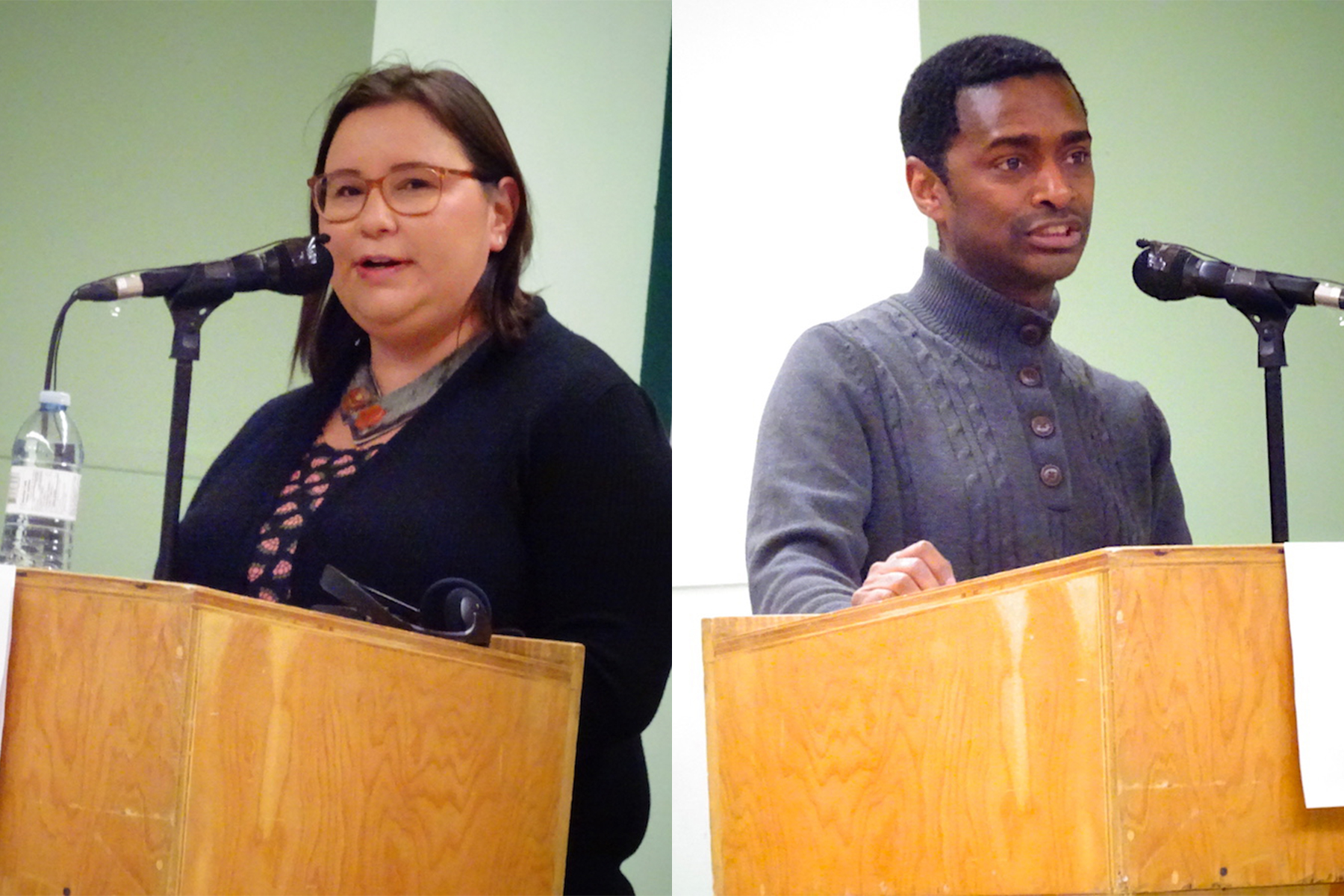 Pamela Hankongak Gross, the incumbent mayor of Cambridge Bay, and Wayne Gregory, who is challenging her for the job, take turns speaking at the podium on Wednesday, Oct. 16, at a candidates forum. The forum, organized by Nunavut Arctic College students, featured the two mayoral candidates and seven of the 11 residents running for council seats. (Photos by Jane George)

CAMBRIDGE BAY—The 40 or so people who turned up for the municipal candidates forum on Wednesday, Oct. 16, had some hard questions to ask the mayoral candidates, Pamela Hakongak Gross and Wayne Gregory.

Those on the floor wanted to know how the two would deal with hunger and the lack of housing in the community.

They also asked for ideas about how to better manage water, sewage and waste services and save energy, improve municipal infrastructure and housing, handle conflicts of interest and avoid nepotism in hiring practices.

And they sought the candidates’ suggestions on how to promote Inuinnaqtun and community wellness. 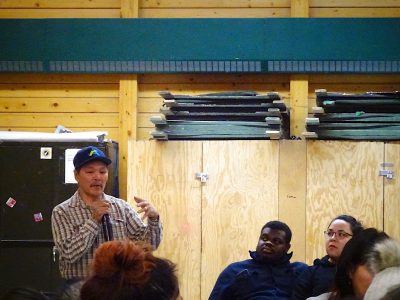 Speaking at the Oct. 16 municipal candidates forum in Cambridge Bay, Richard Ekpakohak asks the candidates for mayor about how, if elected, they will revive Inuinnaqtun. The forum was conducted in English with the exception of a few words in Inuinnaqtun from the incumbent mayor, Pamela Gross, although an interpreter was providing Inuinnaqtun translation. (Photo by Jane George)

Students in the second year of Arctic College’s office administration program organized the three-hour evening session as part of their coursework on government.

With the students’ instructor, Vicki Aitaok, as moderator, the two candidates for mayor first had 10 minutes each to introduce themselves.

Wayne Gregory, who arrived in Cambridge Bay in 2013 to head the IT section in the Kitikmeot region for the Government of Nunavut, spoke about how he felt immediately welcomed in the community. Since then, he has served as a volunteer for the local fire department, Ikalututiak Elks, community radio station and housing association.

The incumbent, Pamela Gross, who is also the executive director of the Pitquhirnikkut Ilihautiniq/Kitikmeot Heritage Society, spoke her opening words in Inuinnaqtun. She said she had arrived back in Cambridge Bay six years ago, as well, after spending her childhood mainly in the Northwest Territories and then in Ottawa for post-secondary studies in Ottawa, at Nunavut Sivuniksavut and Carleton University.

Seven of the 11 municipal councillor hopefuls were also on hand to talk about why they wanted to be elected.

Questions from the audience honed in on the candidates’ approach to leadership in the council: how they would deal with conflicts of interest and contentious issues in council, and whether they thought business owners who provide services to the town should run for council.

To that, incumbent councillor Sandi Gillis, whose company, Qillaq Innovations, provides road maintenance services to the municipality, said there are bylaws that prevent councillors from participating in discussions and votes involving matters in which they have conflicts of interest.

Gillis rejected the idea of preventing some community members from participating because of their links to businesses. That wouldn’t be good, she said, adding that “it takes a whole community to run a community.”

Asked how they, as councillors, would ensure local businesses, and not just larger contractors from the south, benefit from big projects, they suggested looking at ways to keep the money and jobs in Cambridge Bay—an idea that came up, and was set aside, in 2017 during heated council discussions about community development.

Wilf Wilcox, owner of Jago Services Inc., an electrical, heating and plumbing contractor, said “if we want big things we have to learn to work with big contractors.”

To learn more about what the candidates said on Oct. 16, and where they stand on various issues, you can go to the Cambridge Bay’s Facebook news site, which features a posting of recordings from the forum for each candidate.

The advance vote for the Oct. 28 municipal election takes place on Monday, Oct. 21, in Cambridge Bay from 9 a.m. to 7 p.m. at the Luke Novoligak Community Hall.

To find election information for other communities, go to Elections Nunavut.