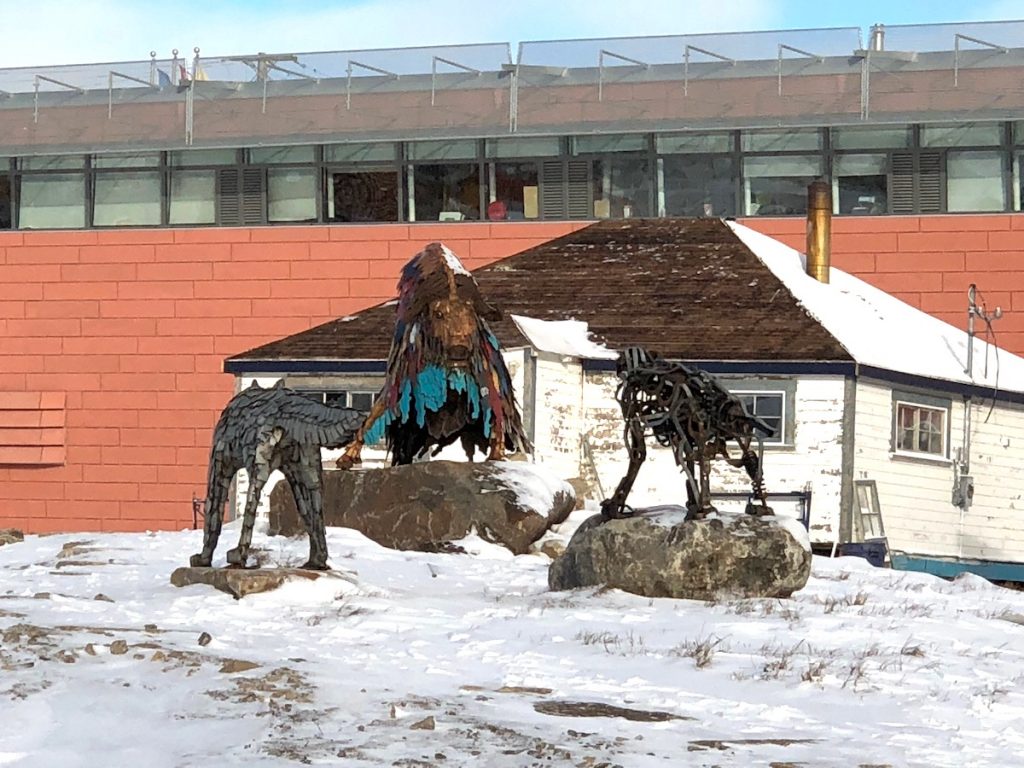 Cambridge Bay’s Itqaumavik Park features a scrap-metal sculpture of a muskox facing off against two wolves. The park is bound to be a major attraction for cruise ship visitors in Cambridge Bay who start arriving in the western Nunavut community this week. (Photo by Jane George)

When the first shipload of about 125 cruise ship visitors arrive off the Bremen in Cambridge Bay this Friday, they will have a newly improved attraction to visit in town: the Itqaumavik Park, “a place of memories.”

Located near the shore, just behind the sleek, recently built $11-million municipal office, the park features modest wooden buildings, which bring back memories from Cambridge Bay as it was not that long ago.

These include old, clapboard Hudson’s Bay Co. buildings and the federal building that once housed the first school, and then the RCMP.

The buildings are set near sculptures created from scrap metals by youth involved in an art and skill development program.

These sculptures include a colourful muskox being chased by wolves.

In the Arctic Inspiration Prize’s 2018 youth category, the participants in Cambridge Bay’s Scrap to Art group picked up a $100,000 prize to open a local welding studio to create art with recycled metal.

At the park visitors will also see and learn about a new addition: a propeller from an aircraft that crashed during the construction of the Distance Early Warning line in 1957.

In the book Flying Canucks: Famous Canadian Aviators, Peter Pigot wrote how the DEW line was constructed in 29 months in the 1950s, in frigid conditions and under the threat of atomic warfare, notes information from the hamlet. 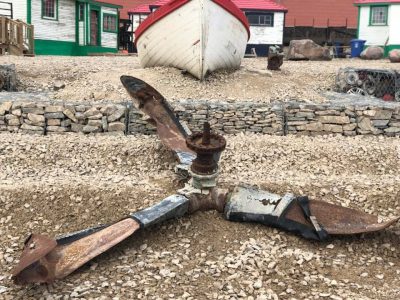 This propeller was part of a Douglas C-124 Globemaster involved in the building of the Distance Early Warning Line site, which crashed on final approach in April 1957. (Photo courtesy of the Hamlet of Cambridge Bay)

The aircraft was heavily laden and landed short and hit a bump. The wings fell off and the two-storey fuselage kept going down the runway.

Aviation records show that “The Globemaster struck a gravel bank on final approach and crashed.”

There were no casualties.

The park also features a freshly painted wooden boat, donated by the family of the late Norman Evalik Sr. 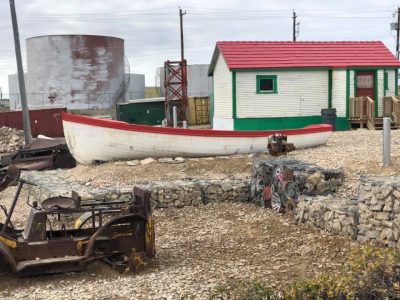 At the Itqaumavik Park, you can see a freshly painted white-and-red trimmed boat, donated by the Evalik family. “This boat had a full purpose of providing for Norman and his family, camping, fishing, hunting and trailing the coast of the Arctic Ocean. He often took his huge family to visit char fishermen and their families at Wellington Bay. This beautiful Cambridge Bay keepsake is for all to enjoy the rich history and nomadic life story of the well-respected and beloved Norman Evalik Sr.,” reads information on the boat. (Photo courtesy of the Hamlet of Cambridge Bay)

Information about this boat says that Evalik, who died in 1990, was born on Aug. 11, 1911. He originally came from northern Alaska to the central Arctic in the 1940s, when he met and married Lena Ototak in Perry River.

In Perry River, Evalik ran a trading post and continued to trap, hunt, trade and raise a family, who all eventually settled in Cambridge Bay.

The first cruise ship scheduled to visit Cambridge Bay is the Bremen with about 125 passengers, according to the Nunavut government’s list of cruise ships calling in the territory this summer.

Another of the eight scheduled cruise ships into Cambridge Bay, which lies at the western end of the Northwest Passage, include the new hybrid electric cruise ship from Hurtigruten, the big Norwegian cruise, ferry and cargo operator. The company calls its 140-metre MS Roald Amundsen “the world’s greenest vessel.”

And on Sept. 2, a 196.5-metre ship called The World, which bills itself as “the largest privately owned residential yacht on earth, ” is also set to visit the community of about 1,800. The World also visited in 2012.