Nunavut premier among those calling for Annie Pootoogook Park 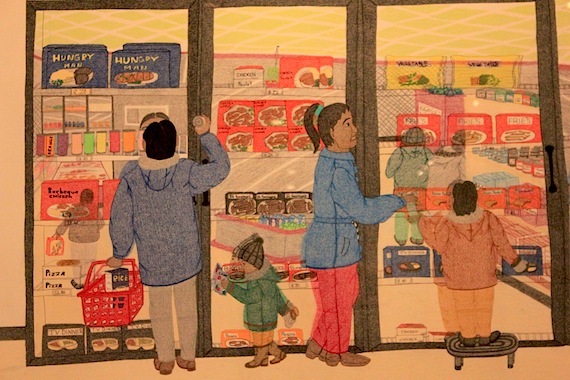 Nunavut Premier Joe Savikataaq and various Ottawa-based organizations that support Inuit have written in support of a campaign by Ottawa resident Stéphanie Plante to name a city park after the revered Inuit artist Annie Pootoogook.

Pootoogook, whose many honours included the prestigious Sobey Art Award for young Canadian artists, was a longtime resident of Ottawa before her untimely death in 2016.

Plante has approached the City of Ottawa to propose that the park next to the Sandy Hill Community Centre, between Somerset St. E and Templeton St., be named after Pootoogook.

Plante told Nunatsiaq News that she felt that attaching Pootoogook’s name to the park would commemorate both the artist’s legacy and her life in a city where the names for public places don’t recognize Indigenous cultures.

Plante said she is drawn to Pootoogook’s art.

“Her art really spoke to me. ‘I woke up this morning and I didn’t have enough toothpaste in the tube.’ Everything she drew you could relate to. It was colourful. It was vibrant. And I think that’s why she was so popular.”

“She was kind of a superstar.”

Plante said she wouldn’t have started any of this without the blessing of Pootoogook’s family.

She approached both Pootoogook’s brother Cee in Kinngait and Veldon Coburn, who is  the adoptive father of Pootoogook’s seven-year-old daughter Napachie, who both encouraged her to pursue the commemoration project.

Plante also reached out for letters of support from community members that she will present as part of her formal application to the city. She shared with Nunatsiaq News a folder of letters from individuals and organizations, including the Nunavut premier; the Ottawa Aboriginal Coalition, which includes Tungasuvvingat Inuit and the Inuuqatigiit Centre for Inuit Children, Youth and Families; and Nunavut Sivuniksavut.

Savikataaq wrote, “Ms. Pootoogook was an incredible Inuit artist from Cape Dorset, and her art is world-renowned. Her death in 2016 left a great void in Nunavut’s art community…. Having a park named after this prominent Inuit woman is a great tribute and step towards reconciliation, as well as an important connection for Inuit in the area.”

Speaking of the support she’s received, Plante said, “Literally, there’s no one who thinks this is a bad idea.”