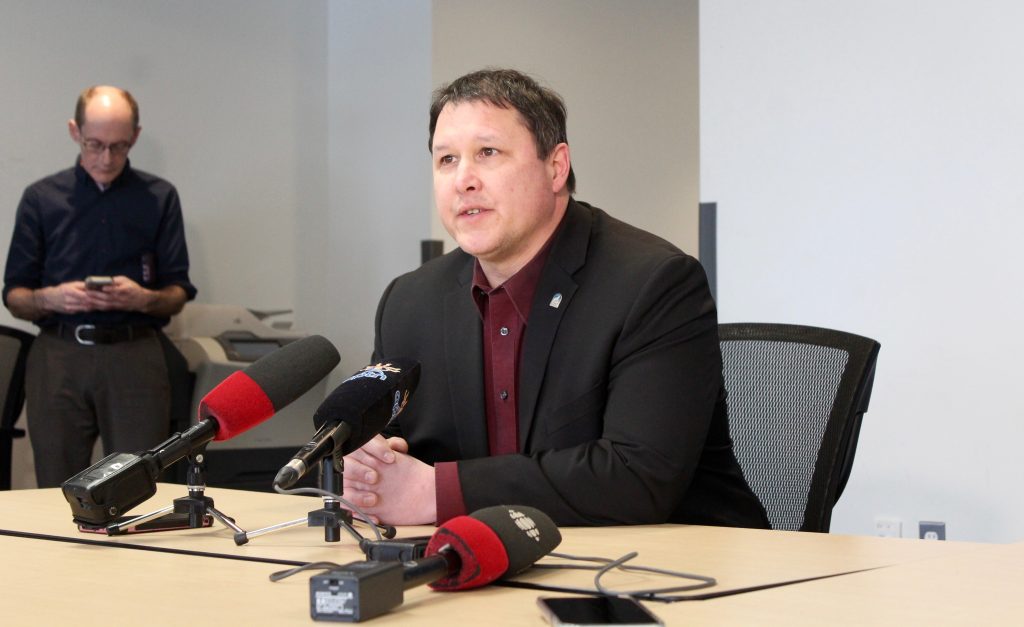 Nunavut’s minister of finance and health, George Hickes, says that the federal government needs to provide more support to the territory to prepare for COVID-19. (File photo)

Hickes slammed the federal government during an April 1 government of Nunavut daily COVID-19 update, saying that historic funding shortfalls and investments the GN has had to make into federal programs has “hindered our ability to be able to enhance our health care in territory.”

“I would hate to see 50 years from now that the federal government would have to make an apology for abandoning us now,” Hickes said.

He said that the two levels of government had a long-standing agreement where the federal government was responsible for, among other things, medical travel for non-insured Inuit from Nunavut, under the federal Non-Insured Health Benefits program.

But instead, Hickes said that the GN “bore most of the cost in delivering” medical travel to non-insured Inuit from Nunavut.

Nunavut currently spends more than $77 million a year on air travel for non-insured Inuit, who account for 89 per cent of medical travel flights, said Hickes.

He said that the GN will pay $20,000 for a flight out of a Nunavut community, and the federal government will reimburse it $125 for that.

The long-standing agreement expired in 2016. Since then, the GN has been negotiating with the federal government to be retroactively reimbursed for money it has spent on medical travel for non-insured Inuit, Hickes said.

The GN didn’t want to sign a new agreement until it was compensated for money it spent on a federal program, he said.

In the past four years, the governments of Canada and Nunavut have signed interim agreements. The last one expired on April 1.

“So I would say my frustration level is high,” said Hickes.

Hickes said the lack of a new agreement won’t affect Nunavummiut who need medical travel. “This is simply an administrative and an accounting discussion,” he said.

But Hickes said the financial shortfall created by the missing federal funds is a “compounding factor in our ability as a territorial government to ramp up our response capabilities of COVID-19.”

There aren’t any confirmed cases of COVID-19 in the territory. But Dr. Michael Patterson, Nunavut’s chief medical officer of health, said that it’s not a matter of if, but when, the pandemic reaches here.

And the territory is poorly equipped to handle it. There are only seven ventilators, and they are the kind meant to be used when a patient is being transported, Patterson said.

There is also a severe shortage of doctors and nurses, and the territory’s housing shortage means COVID-19 would likely spread quickly in overcrowded homes.

Hickes blames the territory’s historic shortage of housing and health infrastructure on the federal government as well.

Nunavut has the lowest population of any province or territory in Canada.

“We have arguably the highest health care costs in the country, yet we’re the least funded because it’s [on] a per capita basis,” Hickes said.

As an example, Hickes said the federal government doled out a $500-million aid package to help provinces and territories prepare for and address COVID-19, and the GN received $516,000 of that, which Hickes said will not go far.

Transport Canada has recommended that the federal and territorial governments continue to buy airline seats at normal levels under the GN duty and medical travel contracts, Hickes said, to keep the airlines going while people aren’t flying.

He said he sent a letter to Marc Miller, Indigenous services minister on Tuesday night, “outlining their responsibility to support Nunavut airlines through this unprecedented time.”

“What I’m saying is ISC needs to follow the recommendations from Transport Canada and pay for the seats that they are responsible for, and that is 89 per cent of our medical travel scheduled flight seats,” Hickes said.

Hickes also said that he intends to go back to “the original terms of the original extension” of the Non-insured Health Benefits agreement and submit an invoice to the federal government to cover the period from when the original agreement expired, “as they agreed to then,” to get back the money that Nunavut has paid for medical travel flights for non-insured Inuit.

Hickes said that Nunavut needs direct investments from the federal government to keep it at the same level as the rest of Canada.

“The time is now for the federal government to abandon these old methods and practices that do not work for Nunavut,” he said. “Use COVID-19 as an opportunity to do better.”

In response to a request for comment, Canada’s Finance Department responded later with an email, saying that the government is committed to supporting the health and safety of all Canadians, including Nunavummiut. It said in 2020-21 the federal government will transfer almost $1.8 billion to Nunavut through territorial formula financing and health and social transfers.

The email also referred to $305 million in federal funds for Indigenous communities, part of the COVID-19 relief package, of which Inuit got $45 million and Nunavut got $22.5 million, distributed from the federal government to Inuit organizations.