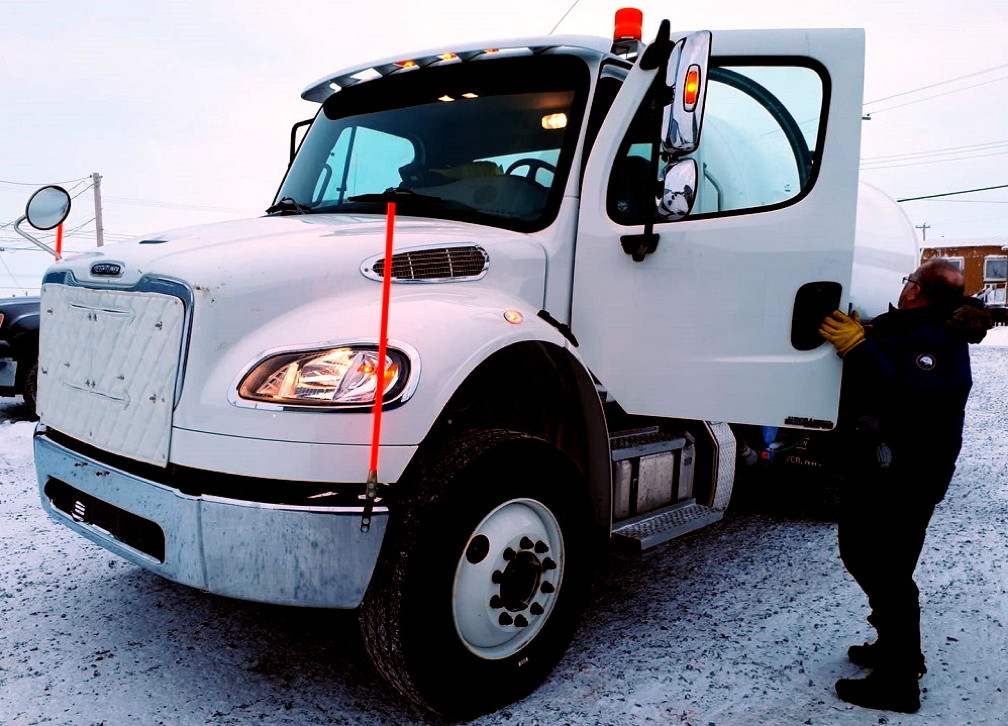 This is one of two new sewage trucks that arrived in Baker Lake in January 2019, following a fire that destroyed a hamlet garage. Nunavut Tunngavik Inc. is now working with the Nunavut Association of Municipalities to spend $1.25 million of federal money on water and sewage services across the territory. (File photo)

“Water is a basic human right. We are taking this emergency measure to ensure Inuit are able to wash their hands frequently to prevent COVID-19,” NTI President Aluki Kotierk said in a news release.

To do that, NTI will work with the Nunavut Association of Municipalities to get the money out soon, to ensure all households get daily water and sewer service in April, NTI said.

“Now is the time to be liberal with our water usage,” NTI said.

That could include hiring new drivers, extending delivery hours, paying overtime to drivers, or ordering parts for service trucks.

“Municipalities are the front line in the fight to prevent this pandemic,” said Iqaluit Mayor Kenny Bell, who’s the president of NAM.

NTI said that because of poor infrastructure, many Inuit aren’t able to use basic preventive measures like hand washing and cleaning hard services.

“Many Inuit are unable to take the most basic preventative measure of handwashing and cleaning hard surfaces due to the need to conserve water as a result of overcrowded houses, shared water and sewer tanks in multi-plexes, blizzards and inadequate municipal infrastructure,” NTI said.

The money comes from the $305-million Indigenous Community Support Fund that Parliament approved this past March 25, which is part of the $82-billion COVID 19 relief package that Prime Minister Justin Trudeau announced on March 18.

The Inuit share of that fund amounts to $45 million. Of that, the four Inuit organizations of Inuit Nunangat, who form the board of Inuit Tapiriit Kanatami, decided the Nunavut share should be 52 per cent, or $22.5 million.

At a board meeting held on March 25, NTI decided how the $22.5-million Nunavut allocation should be divvied up among Nunavut’s Inuit associations and urban Inuit.

Here’s what they decided (the numbers are rounded off):

On the same day, Indigenous Services Minister Marc Miller had described during a nationally televised federal cabinet briefing how much money each distinct Indigenous group would get from the $305-million fund:

He also said that during the COVID-19 pandemic, the federal government is worried about remote and rural communities.

“During this crisis, in particular, those in remote and fly-in parts of the country are uniquely vulnerable,” Miller said.

He also said the support fund can be used to help elders, children and the unemployed, and can also be used for urgently needed food supplies.

He also suggested more federal help could be on the way to help Indigenous communities respond to COVID-19.

“Let me be clear. This is just the beginning. We know that more support will be needed and we will be there to make sure no Indigenous community is left behind,” Miller said.

As for NTI, it says the vulnerability of Inuit communities to COVID-19 means governments should spend more on infrastructure in Nunavut.

“The COVID-19 global pandemic underscores the need for long-term sustainable investments to address the long-standing social and economic inequities faced by Nunavut Inuit.”