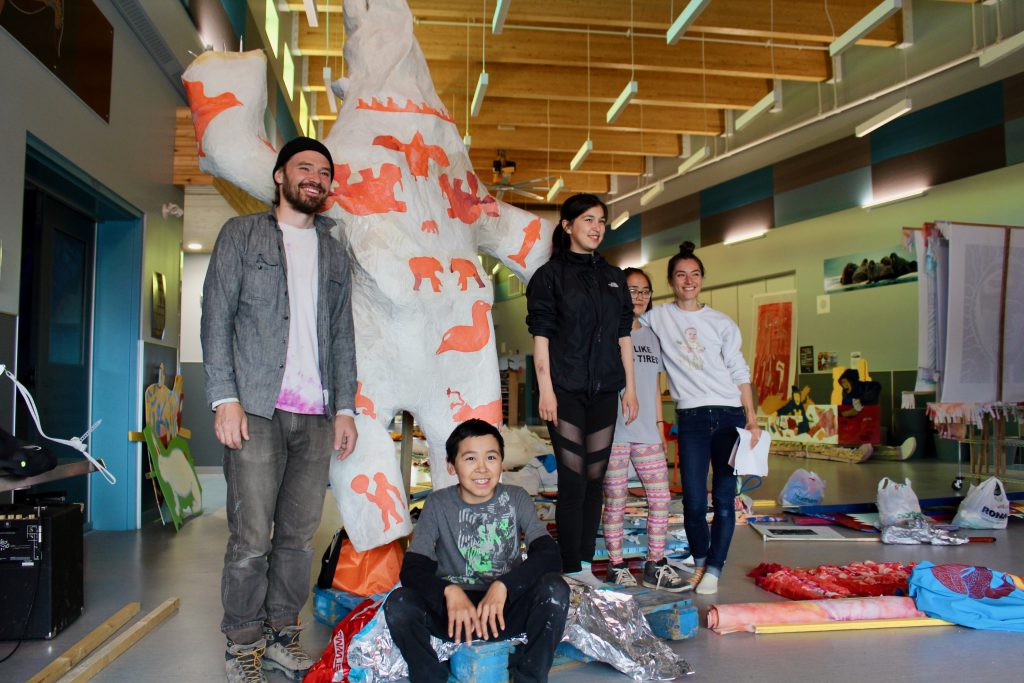 Patrick Thompson (far left) and Alexa Hatanaka (far right) with a few Embassy of Imagination youth during the morning before Saturday’s parade. (Photo by Emma Tranter)

If you were in Cape Dorset last Saturday, you might have seen a giant copper snowmobile parading down the street.

Or, you might have spotted a pair of shiny snow goggles bigger than your head.

These were just a couple of the pieces of art made by youth in the community shown off at a parade around town on Saturday, Aug. 3.

The parade was developed and put on by Cape Dorset’s Embassy of Imagination, an arts program for the community’s youth.

There was a buzz inside Peter Pitseolak High School during the morning before the parade. Banners, costumes, and huge cardboard sculptures were spread out on the floor, ready to be picked up by the 100 youth who would participate that afternoon. 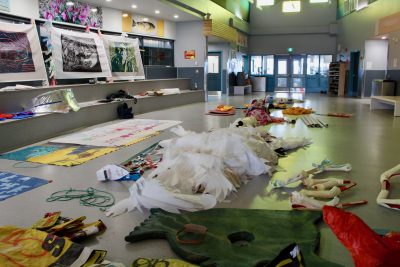 Preparations for last Saturday’s Embassy of Imagination parade are laid out at Peter Pitseolak High School in Cape Dorset. (Photo by Emma Tranter)

Patrick Thompson, who runs the Embassy of Imagination with Alexa Hatanaka, said the project is one of two parades they have been working on. The other will be held in Toronto in September as part of the Toronto Biennial of Art.

“Metaphorically they are one parade. This starts here and then the one in Toronto begins and walks along the lakeshore and ends up at the Volvo dealership which is part of the Toronto Biennial,” Thompson said.

Thompson holds up a snowmobile he says is made of metal from the old high school, which burned down in 2015.

“These started out as miniatures made of play dough that the kids made and then we 3D scanned them and we blew them up.”

The studio sells the snowmobile sculptures to buy real snowmobiles, something Thompson says will help youth get out on the land.

“We’re trying to make a way to create conversation within the art world, which often hangs things for decoration, but this is definitely making a change in the community,” he said. 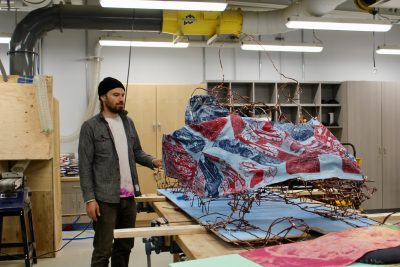 Patrick Thompson shows the snowmobile a group of kids made entirely out of copper from Cape Dorset’s old power plant. (Photo by Emma Tranter)

The Embassy of Imagination recently began working out of a new space in the high school. The sign from the old school, intact in spite of the fire, hangs at the front of the new school.

Another piece features what Thompson calls “tarpkas,” which are parkas made out of snowmobile tarps. These are featured alongside a giant copper snowmobile, made from materials from the town’s old power plant.

Iqaluit artist and jeweller Mathew Nuqingaq also held a snow goggle-making workshop with the youth. These goggles, however, were made from everything from cereal boxes to hot glue.

Back in the high school’s kitchen, some of the youth prepare egg salad sandwiches for a community feast held following the parade. 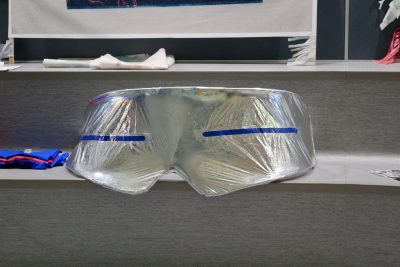 A pair of shiny, oversized snow goggles made by Iqaluit artist Mathew Nuqingaq was featured in Saturday’s parade in Cape Dorset. (Photo by Emma Tranter)

Eight Embassy of Imagination youth will head to Toronto with Johnson and Hatanaka for the Toronto Biennial this September.

“We try to make youth art something that people have never seen before,” Thompson said.