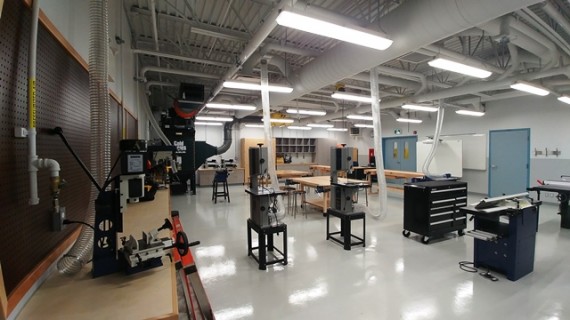 This modern and fully stocked shop room made some community members gasp. (PHOTO COURTESY OF THE DEPARTMENT OF EDUCATION) A new high school opened for classes in Cape Dorset this fall, replacing the school that burned down in 2015. (PHOTO COURTESY OF THE DEPARTMENT OF EDUCATION) 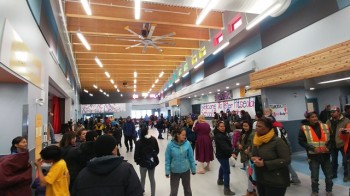 Cape Dorset residents enjoy an open house at the new high school on Sept. 10. (PHOTO COURTESY OF THE DEPARTMENT OF EDUCATION)

Almost everything about Cape Dorset’s $34-million state-of-the-art high school is shiny and new, except for the building’s exterior nameplate and decorative steel cut-outs of artist Peter Pitseolak, a sled driver and dog team.

After a 2015 fire destroyed the Baffin community’s high school, residents chose to keep the original name of the school for a new school that opened for classes on Aug. 27.

This was “to respect and honour the past,” said Allan Boyce, principal at Peter Pitseolak School since last year.

The refurbished sign and outdoor artwork were salvaged from the original building.

In a grand opening ceremony last week, on Sept. 10, Education Minister and Cape Dorset MLA David Joanasie cut a red ribbon on the steps of the new school, and the hamlet mayor, DEA officials and the principal, Boyce, made speeches. The grand opening comes just three days and three years after the previous school burned down.

Boyce watched many community members gasp when they came inside the building, saying “they had never seen anything like it.”

The school’s gym has a basketball court that is NBA regulation size, there’s an industrial kitchen in the home economics room, and a shop room is fully stocked with new tools. Community members can use the school’s fitness centre in the morning.

“Everybody seems to be extremely happy,” he said. “It’s certainly a modern facility.”

Of the 210 students enrolled at Peter Pitseolak this year, around 170 are regularly attending now—though the number of absences is in part due to a bug sweeping through town, he said. After the fire there was a drastic drop in high school attendance in Cape Dorset.

“There were students in the community who decided they didn’t want to go to school anymore. And there were other students who left and went to Iqaluit and attended school there,” Boyce said, adding that most students are back now.

Three youth were charged with arson following the 2015 fire.

While the new high school was being built, high school students filled two classrooms at the community’s Sam Pudlat Elementary School, along with space at the Nunavut Arctic College classroom, and portable classrooms sent in by the Government of Nunavut.

Those portables will likely stay in the community and be used to expand the elementary school, which is currently “bursting at the seams” because of population growth in the community, Boyce said.

In 2016 four youth were charged by police for attempted arson on Sam Pudlat school.

A second school fire that destroyed the only school in Kugaaruk in 2017 left the GN afraid it would become “uninsurable” for school buildings. As well, the GN found that the Cape Dorset school was not fully insured when it was destroyed.

There are now around 15 water tanks in the basement of the new Peter Pitseolak High School. Those tanks are hooked up to a sprinkler system that runs throughout the building for fire suppression.

“In addition to that we have a two-part security system,” Boyce said. That’s both electronic door fobs and an alarm. “And we have a really high-tech camera system,” he said. “Security has been upgraded in a really substantial way.”

The new school is built about a kilometre away from the old school site. Because of the location, more students will likely rely on the bus system now, he said. The school shares one school bus with the elementary school, along with a second small wheelchair-accessible bus.

Earlier this summer there were still not enough teachers to staff schools in the community, but most teaching spots have since been filled, Boyce said. 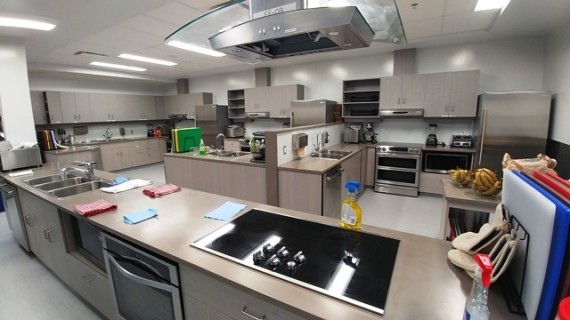 Many mothers were impressed with the home economics room at Cape Dorset’s new high school during an open house on Sept. 10, the principal said. (PHOTO COURTESY OF THE DEPARTMENT OF EDUCATION)