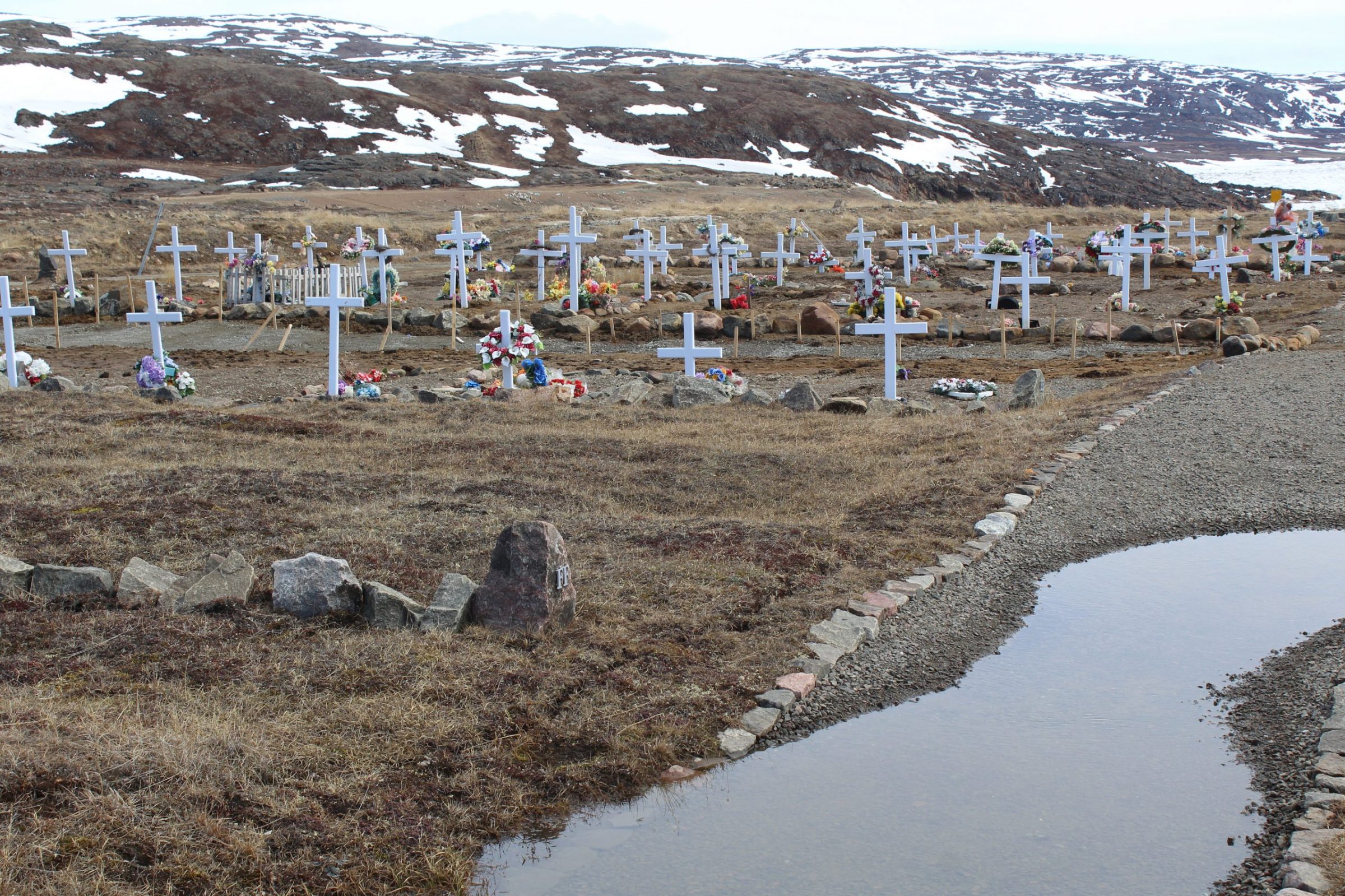 Since its inception, the Apex cemetery has been riddled with problems such as flooding. (Photo by Meagan Deuling)

Tentative plans to fix Iqaluit’s flood-prone cemetery in Apex were recently presented during the first meeting of the city’s cemetery advisory committee.

In attendance at the inaugural meeting on Thursday, May 28, were the committee’s chair, Coun. Joanasie Akumalik, representatives from Nunavut Tunngavik Inc. and Nunavut’s departments of Family Services and Community and Government Services, as well as a Government of Nunavut lawyer, city staff and Mayor Kenny Bell.

Since the cemetery’s opening in 2014, residents have raised concerns about having to bury loved ones in muddy, water-filled graves.

Others have said they believe the $1.33-million graveyard’s boggy ground is a public safety risk.

Announced in January, the committee was created to help decide how to deal with these issues.

Part of last week’s meeting was a breakdown of how exactly that might happen.

“A lot of these issues we’re noticing are the result of permafrost degradation,” said Chief Administrative Officer Amy Elgersma.

“When the grave is dug, the soil is exposed to the air and when the air hits that soil, we’re noticing the melting happens and the graves fill with water.”

To account for this, the city pumps the water out of the graves before and after a funeral, before filling the grave back in.

But because the permafrost melts, the ground sinks, leaving affected areas with depressions that fill with water, causing the cemetery to resemble a bog.

To fix this, in May, city council approved $160,000 for cemetery remediation. 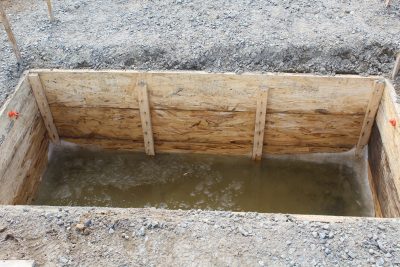 When the cemetery was first opened, there were issues with the soil collapsing into the graves. To solve that problem, the city began building wooden boxes that are essentially frames for the graves. (Photo by Meagan Deuling)

Initially, the plan was to do landscape work, remove some tundra, add soil, improve the pathway and add 50 burial boxes.

While this work will continue, the long-term plan was replaced with a new one after a recent visit to the site by city staff.

“We would like to propose raising the cemetery site by approximately three feet with a suitable material like gravel,” said Elgersma.

“This would allow for, first of all, the drainage, but it would also allow for less degradation of the permafrost.”

This is because the depth of the graves would be split between the new surface and the original ground, which according to Elgersma, would expose less permafrost.

Additional design work, which is slated to happen this year, will need to be done before moving forward with the project.

“If the committee finds that this would be something that we should present to council, I’m just offering to sit down with everybody that’s buried their family there and discuss the situation with them,” said Bell.

“Explain how it’s going to be done on a one-on-one basis, each and every one of them, to make sure that they feel that their loved ones are being treated fairly.”

Another topic discussed at the meeting was funeral costs in the city.

According to information presented by Elgersma, the cost of a funeral in Iqaluit is $4,635.15, which doesn’t include burial costs, because, since taking over the site maintenance of the cemetery, the city covers that amount.

While Elgersma did note that this was less than in other jurisdictions, she also noted that there are services, such as embalming, that are not available in the city.

Despite this, “we do know that the fees are prohibitive for many people,” she said.

To see if anything could be done to alleviate the financial burden of burying a loved one, Elgersma and city staff reviewed the burial assistance programs that are common in other jurisdictions.

“I think it would be very beneficial for many residents in Iqaluit, and for the community as a whole, to see a fee assistance program for families who really cannot afford to bury their loved ones,” said Elgersma.

“I would encourage everyone to start to take a look at some of those links and then maybe we’ll have the opportunity to advocate for and maybe even help develop a fee assistance program.”

The links to those programs can be found alongside the committee meeting’s agenda.

The committee meeting, being the first of its kind, also included some formalities, including a discussion of the draft terms of reference.

“I’ve listed the objectives of the committee to work in partnership with community members, government agencies, local parishes and any organizations to establish and recognize priorities to improve on the existing cemetery site,” said City Clerk Rod Mugford.

“The committee will review the current cemetery bylaw and make recommendations for a draft proposal … provide recommendations in order to establish cost-effective funeral services and other objectives as established by the members of this committee.”

The members unanimously voted to recommend that the city council approve the terms of reference.

While the next steps weren’t discussed in detail due to technical difficulties that ultimately ended the virtual meeting, it was agreed that Coun. Akumalik will seek to identify a community elder to sit on the committee and will update the city council during their next meeting on June 9.