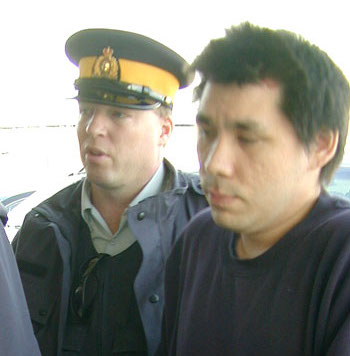 Mark King Jeffrey is led into a police vehicle, in an undated file photo. Jeffrey died in 2015 while in custody at the medium-security Beaver Creek Institution near Gravenhurst, Ont., where he was serving a life sentence for the 2002 murder of 13-year-old Jennifer Naglingniq. An inquest has been called into the circumstances surrounding his death. (File photo)

A coroner’s inquest into the 2015 death of convicted murderer Mark King Jeffrey has been scheduled to begin on Nov. 22.

Jeffrey, 34, died while in custody at the Beaver Creek Institution in Gravenhurst, Ont., on June 29, 2015. He was found unresponsive in his jail cell while serving a life sentence for the 2002 murder of 13-year-old Jennifer Naglingniq in Iqaluit.

The inquest will examine the events surrounding Jeffrey’s death and may offer recommendations aimed at preventing similar deaths in the future.

Under Ontario’s Coroners Act, an inquest into the circumstances of a death that occurred while in custody is mandatory.

The inquest is scheduled to last eight days and around 18 witnesses are expected to testify.

Presiding over the case will be Dr. Steven Bodley, while Ashley Jacobs and Kate Forget will serve as the inquest counsel.