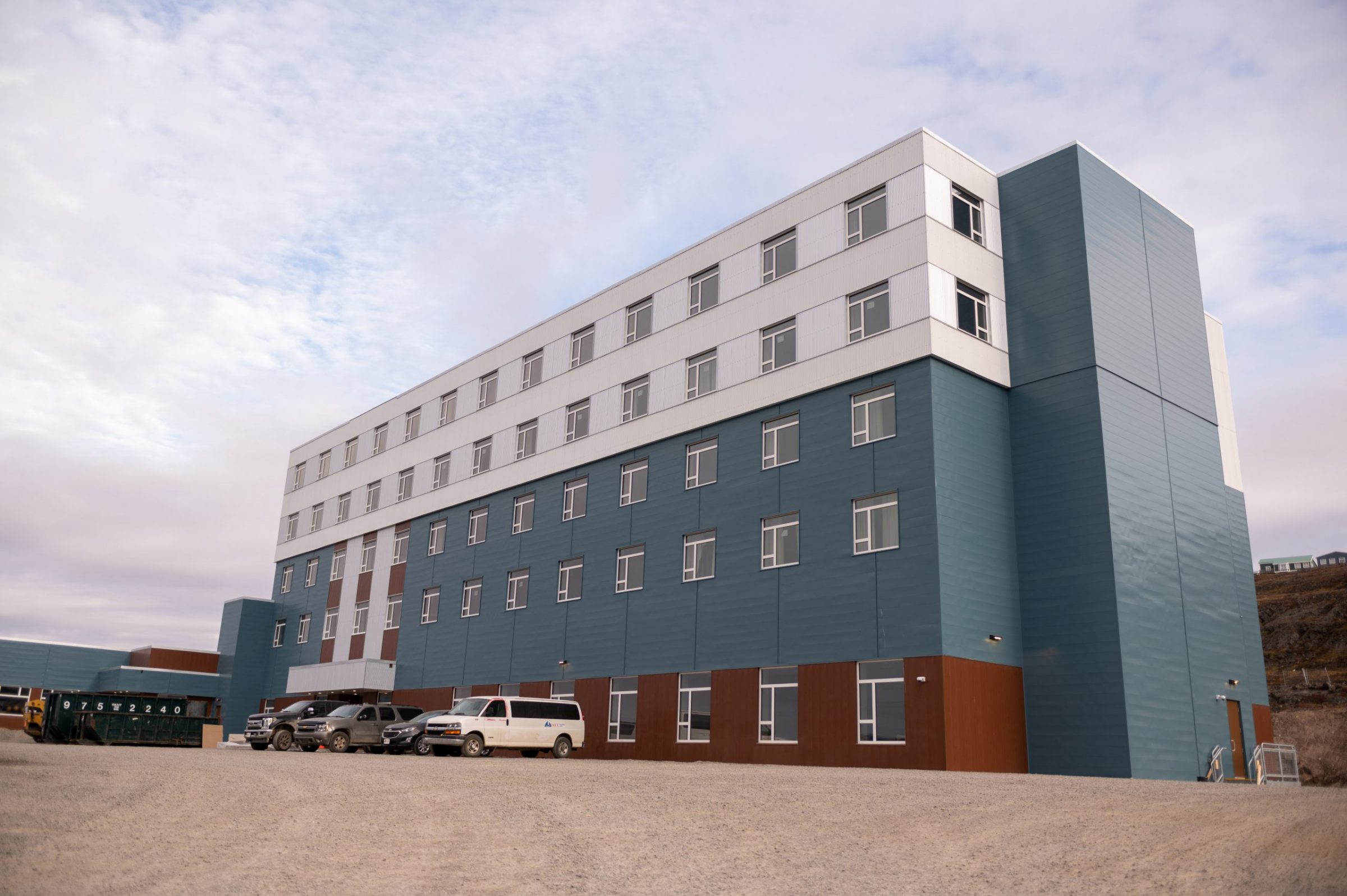 If you were to pick a time to finish construction on a new hotel and conference centre in Iqaluit and then plan its grand opening, this past spring would not have been ideal.

When the COVID-19 lockdown closed construction on the new Aqsarniit complex in Iqaluit, it was “devastating” to the construction timeline and launch, said Sheldon Nimchuk, the Qikiqtaaluk Corp.’s director of project development and partnerships.

Nimchuk is also the manager of the Aqsarniit project, which is owned by QC, the business arm of the Qikiqtani Inuit Association.

The $70-million legacy project was bankrolled largely by equity from QC, he said.

When the ground was broken for the project, Iqaluit suffered from a longstanding lack of hotel rooms.

But then COVID-19 caught the entire hotel and hospitality industry off guard—and not just in Nunavut, Nimchuk said.

“Initially, we were looking for occupancy in June, but of course COVID hit in March and it obviously had an impact on many fronts,” he said.

Overall, COVID-19 has been challenging for the construction industry, he said, and, for the QC’s ambitious Aqsarniit project, “it certainly slowed things down and had financial impacts.”

Many workers headed south in March and wouldn’t return until June, leaving only those from the Iqaluit-based workforce to chip away at the 95,000-square-foot building.

“Everything was in flux in terms of knowing how things would play out,” Nimchuk said.

Starting in June, southern construction workers were able to head back to the site, but only after first passing through a required two-week quarantine in one of the isolation hubs for travellers heading into Nunavut.

This requirement led to delays and extra costs, because about 60 workers had to be paid for their two weeks in isolation, during which they could not work.

It was definitely a logistical challenge, Nimchuk said, “but once we understood how the process was, it was a process we were able to work with.”

But finding workers willing to do isolation once and then do it again after a second rotation of six to eight weeks proved demanding.

Bird also handled the 2019 shipment of the hotel’s 94 rooms and 12 suites, which were pre-constructed and assembled in Shanghai.

In these modules, everything from beds and chairs to televisions and microwaves were already set up.

The five-storey building is now only about three weeks away from completion.

Sometime in October the Aqsarniit Hotel should be ready to receive its first guests. (Photo courtesy of the QC)

Aqsarniit has been hooked up to the city’s piped water and sewage system, thanks to a $1.6 million contribution from CanNor, the Canadian Northern Economic Development Agency.

And Nimchuk said it’s going to be an energy-efficient building, with plans to draw on more renewable energy sources in the future.

A soft opening is planned, he said, with a grand opening some time in the future.

Aqsarniit’s next hurdles to overcome are operational.

“The reality of the anticipated business pre-COVID is going to be affected,” Nimchuk said.

So that plan now involves “projecting and adjusting how we will weather the storm.”

The spacious lounge at the Aqsarniit will be able to operate only at a reduced capacity, until after Nunavut eases its COVID-19 restrictions. (Photo courtesy of QC)

But under COVID-19 restrictions, that occupancy is reduced by 50 per cent.

The conference centre as a whole was intended to hold 550 to 600 people, and be capable of being divided into three smaller spaces.

But large gatherings are still not permitted in Nunavut.

Meanwhile, conferences throughout Canada have been cancelled due to COVID-19 restrictions: Aqsarniit also saw the cancellation of the fourth annual Arctic Indigenous Investment Conference, scheduled for June.

But Nimchuk said “we’re certainly optimistic that if travel within Nunavut and Iqaluit is permitted that there may be an opportunity to host as much as possible of some of the Nunavut-centric type conferences.”

“You have your best plan and you try to juggle.”

This week the giant Palais des Congrès conference hub in Montreal said it would focus on a hybrid model for conferences with new studios where conferences could broadcast sessions online to people who would not physically attending.

But, of course, in Nunavut that would take better internet services.

That’s something QC is working on with SSi Canada, formerly known as SSi Micro, the operator of Nunavut’s Qiniq and SSi Mobile network.

Once up and running, Aqsarniit was to have had about 60 full-time employees.

While that number will be less for now, there will be a high percentage of Inuit, some who have been training with QC’s Qikiqtani Industry Ltd., Nimchuk said.

The goal is for Aqsarniit to offer Inuit careers in hospitality, he said.

Holloway Lodging Management Services, a Nova Scotia-based firm, which also manages hotels in Yellowknife, such as the Super 8, and in Whitehorse, including the Sternwheeler Hotel and Conference Center, will run the business side of Aqsarniit.

The four-storey, 86-suite hotel, with a restaurant, covers two parcels of land at the intersection of Queen Elizabeth Way and Niaqunngusiariaq Road in Iqaluit.