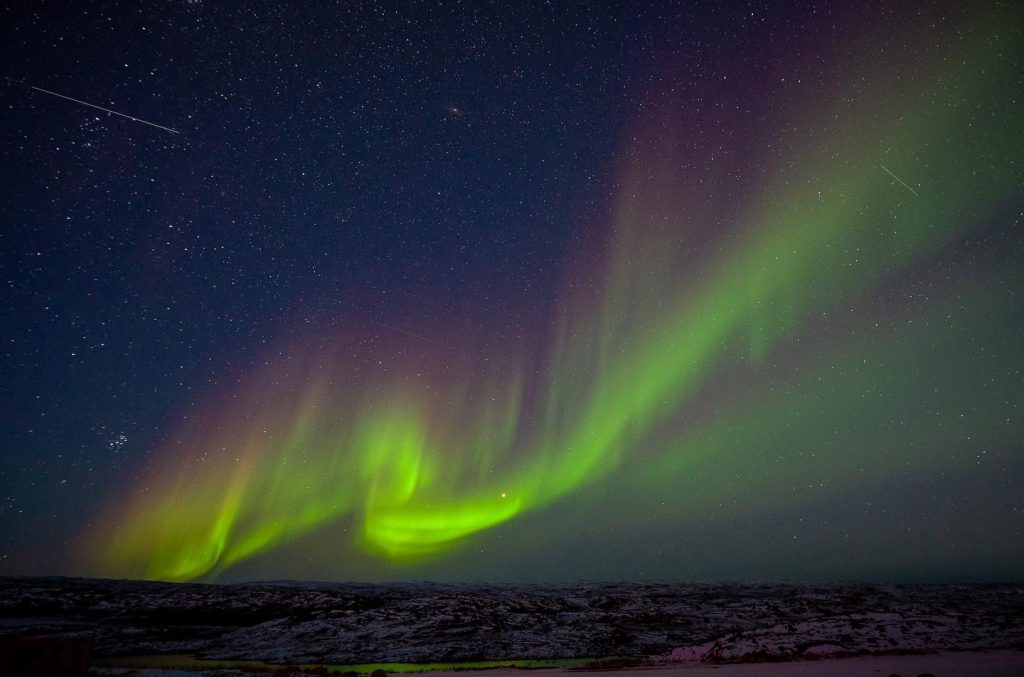 Eastern Arctic residents have been treated to some stunning light shows put on by the aurora borealis in recent weeks.

John Manuel, a senior program scientist at the Canadian Space Agency, says it all has to do with the weather. Space weather, to be precise.

Our sun emits a constant stream of charged particles from its upper atmosphere. Scientists like Manuel call this the solar wind.

“Usually this wind from the sun is pretty uniform and pretty fast,” he said. “It’s hundreds of kilometres per second. But it’s really a very gentle breeze, if you’re in a spacesuit and you’re out in space, you’d feel nothing.”

“But there are times it can get stronger and denser. The wind becomes stronger and can shake the magnetic field around the whole planet.”

That, in turn, helps create the northern lights. Manuel likens the aurora to a rain of particles—mostly electrons—from outer space. As these charged particles collide with the Earth’s atmosphere, they light up.

But these particles don’t fall evenly, “like a hail storm,” he said. Instead, they follow the magnetic field of the Earth. That field runs parallel to the Earth along the equator. But, towards the northern and southern poles, the field spikes upwards.

“And in the North, if you follow the direction of the magnetic field, it’ll take you out into space,” said Manuel.

“And it turns out that the waves and arcs and curves that you get when you look at the aurora, those are caused by the magnetic field being pushed around by winds in space.”

When the solar wind picks up for a prolonged period, scientists call this a solar storm. That’s what the eastern Arctic has been witnessing lately, said Manuel, as well as many more southerly parts of Canada. Even Montreal, where he is based, was forecast to see the northern lights recently.

“It’s ringing the earth’s magnetic field in a way that causes the electrons and protons in space to fall down on the Earth along the magnetic field lines.”

There are other factors at play for it to be a good night for the northern lights. One, of course, is the return of dark skies at night. “That’s one reason why you’ll see it,” said Manuel. “It’s finally getting dark again.”

Observers of the northern lights will be familiar with how the colour of the light show can shift from green and blue to yellow and red. This, too, can be explained by science.

“Depending on how strong that rain of electrons is, that determines the colour of light that you get,” said Manuel.

“So when it’s a gentle rain of electrons … from space, you get a gentle green. Then when it picks up and gets stronger, you get a more intense green. Eventually you’ll get a bit of red. It’s a good night if you see some red. The red occurs at higher altitudes.”

Solar weather goes through regular ups and downs, following what’s called the solar cycle. That’s caused by an event that happens every 11 years, when the magnetic field of the sun flips over.

Scientists reckon that the sun just passed its most quiet point of this cycle one year ago. “Five year’s time, it’ll be at its maximum,” said Manuel.

“Nowadays it’s OK, but we can look forward to better and better aurora over the next couple of years.”

The Canadian Space Agency has practical reasons for paying attention to the weather in space. Besides causing the northern lights, solar storms could also cause power outages on earth and interfere with the operation of satellites circling our planet.

The biggest solar storm on record took place in September 1859. It caused fires throughout the U.S. telegraph network of the day and pushed the northern lights so far south, they could be seen in Mexico.

Of course, people at the time didn’t depend on electronic devices in the same way we do now. A solar storm of similar strength would cause much more damage today.

A similar event nearly happened in 1989, but the giant gust of solar wind didn’t strike the Earth head-on. The event still managed to cause power outages throughout Quebec for nine hours.

Had that gust hit the Earth directly, “It’s certain it could have been very damaging,” said Manuel. “I hesitate to say devastating. But some of the forecasts say it could lead to trillions of dollars. You could think of a couple of hurricanes’ worth of damage to infrastructure.”

Given these concerns, Canada is teaming up with the European Space Agency and the Chinese Academy of Sciences to launch a satellite that will be used to learn more about the events that drive space weather.

That satellite, known as the Solar wind Magnetosphere Ionosphere Link Explorer, or SMILE, is expected to launch in 2024. It will feature a special Canadian-built camera designed to watch the northern lights using ultraviolet light.

“By using that and some other instruments on board, people hope to find out more about what causes the aurora and how the Earth’s magnetic field controls the aurora, and vice versa, because people think the aurora has a role in controlling what’s happening out in space.”

The satellite is expected to launch at solar maximum—the part of the solar cycle with the most activity. The Canadian Space Agency hopes to share the movies from space it records shortly after taking them, said Manuel.