Explain like I’m 5: How did fuel make it into Iqaluit’s water supply?

The answer isn’t as simple as one might expect 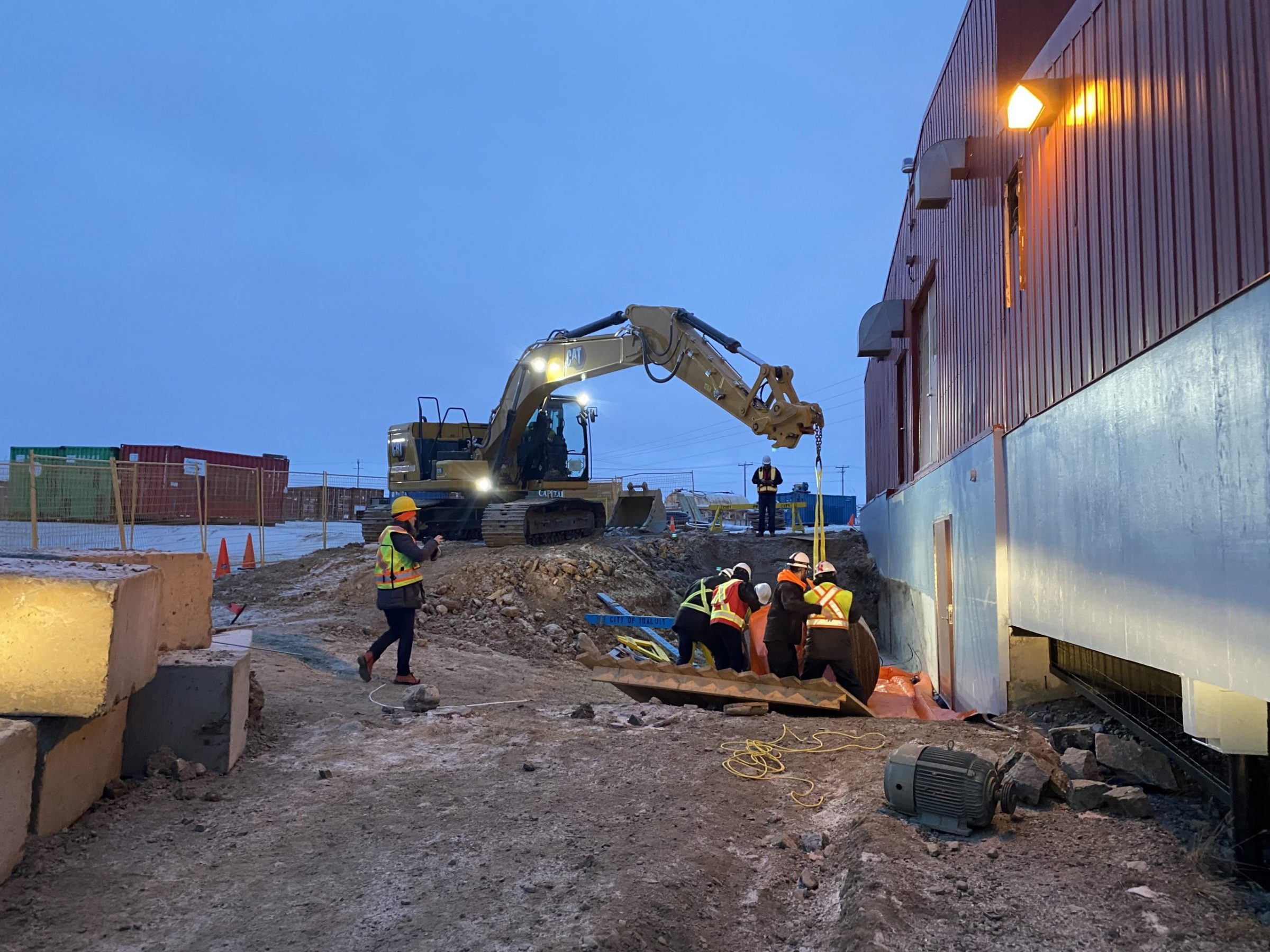 City staff excavated the suspected source of the water supply’s fuel contamination in November, before removing it from the nearby water treatment plant. (Photo courtesy of the City of Iqaluit)

The fuel contamination of Iqaluit’s water supply left people asking a lot of questions, not least of which was — how did it get there in the first place?

Answering this question was one requirement among a longer list of must-dos before the territory’s chief public health officer, Dr. Michael Patterson, would consider telling people the city’s water was safe to drink again after diesel fuel was detected in the city’s water system in October. Patterson did lift the do-not-consume water advisory on Dec. 10, nearly two months after it was imposed on Oct. 12.

The original suspect was a crack in one of two underground holding tanks at Iqaluit’s water treatment plant, where water sits in chlorine before moving into a treated reservoir, called the North Clear well.

That tank is where the bulk of the fuel was found. In fact, according to numbers released by the Department of Health earlier this month, fuel levels categorized as F2 hydrocarbons (which includes diesel and kerosene) in that tank were 5.3 million micrograms per litre, or 1.3 million times over what’s considered safe for consumption.

But no obvious cracks were found in the North Clear well, Iqaluit’s chief administrative officer Amy Elgersma said at an Oct. 22 news conference. A month later, the city announced the fuel had come from a tank located nowhere near the North Clear well. So how did it end up accumulating there? 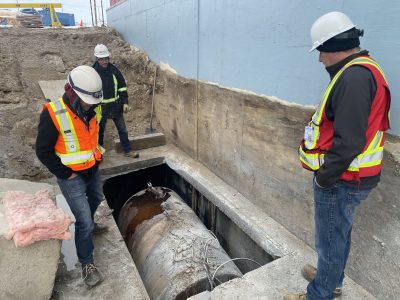 Fuel leaking from this tank made its way into Iqaluit’s water treatment system two months ago. (Photo courtesy of the City of Iqaluit)

City officials hired an engineering consulting firm called WSP Canada to get to the bottom of the mystery, and engineer Ian Moran provided the city with a two-page written report that explains everything. That report was provided to Nunatsiaq News by city spokesperson Aleksey Cameron.

The answer starts with a slow drip from a 60-year-old fuel tank, located outside the plant itself, and ends with a scientific phenomenon called petroleum vapour intrusion.

But let’s start at the beginning, in a place called the void.

“The void, as it is called, is the space between the water treatment plant and exposed bedrock,” states the report.

Experts aren’t sure when, but at some point, a tank forgotten in the void years ago started leaking fuel. That fuel dripped down to the lowest part of the void, which is underneath the water treatment plant.

A surge tank, which holds wastewater from within the plant, sits just above that part of the void.

Eventually, the fuel got mixed with groundwater at the bottom of the void, and that contaminated water reached the bottom of the surge tank. The surge tank is made of concrete, which has natural pores. The fuel was able to “wick” up through those pores, into the tank, according to the report. 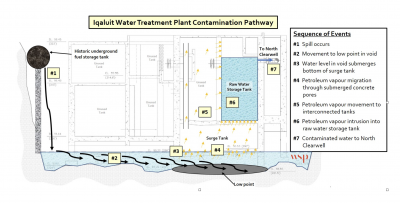 Engineer Ian Moran provided this visual overview of how Iqaluit’s water was contaminated by diesel hydrocarbons. The fuel leaked underneath the plant, was sucked up through natural pores in a tank at the bottom of the plant, vapourized, and eventually made its way to a raw water tank. (Graphic courtesy of Ian Moran/WSP Canada Inc.)

From there, the fuel continued to collect and vapourize in the surge tank until pressure created by the accumulating gas reached a point where it had to go somewhere. So it was pushed up, out of the surge tank, through an empty pipe to an unused tank underneath the water treatment plant.

The fuel continued to accumulate and vapourize, causing pressure outside the surge tank to rise too. Eventually, those gases found a way into a raw water tank that feeds into the water treatment plant through a phenomenon called petroleum vapour intrusion — it’s a fancy name that describes how certain, sometimes dangerous, gases can rise from underground into buildings above. Homeowners, especially, would be familiar with a similar type of vapour intrusion, as it’s how radon gets into basements.

By now, hydrocarbon vapours had infiltrated the water that moves through Iqaluit’s water treatment plant, and it would only be a matter of time before people started reporting the smell of fuel in their tap water.

In the end, there were no cracks found in any of the tanks or wells at the water treatment plant, including the North Clear well, according to the report.

People in Iqaluit were given the OK to start drinking their tap water again, as of Dec. 10, and a real-time hydrocarbon monitoring station is in place to alert officials of future contamination.

“As a result, the City of Iqaluit now has one of the most stringent water testing systems in Canada,” states the city’s water facts webpage.

Chief public health officer Dr. Michael Patterson has said the Health Department will order a third-party review of how the government handled the fuel investigation. There is no timeline for when that review will happen.

— with files from Mélanie Ritchot