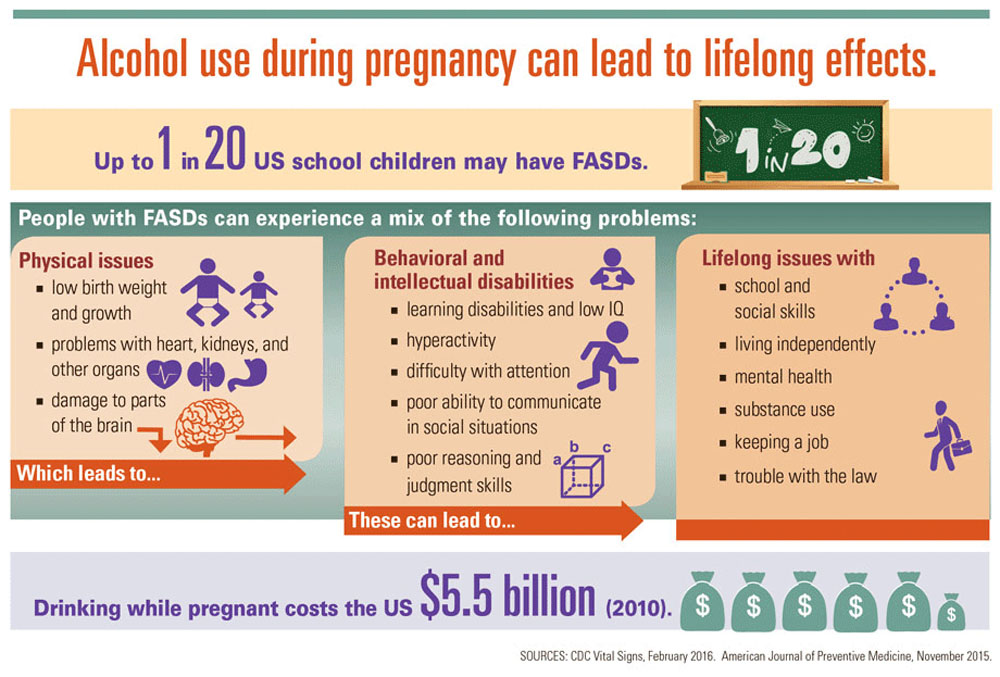 This graphic was produced in the United States by the Centers for Disease Control in 2015 to promote awareness of the human and financial costs of FASD. The total economic cost to Canada is at least $1.8 billion a year, and the total cost per person with FASD is around $1.12 million over the course of their life.

People in Nunavut with FASD, along with their families, have the right to know they have the disability, Nunavut-based advocates say.

But due to a lack of screening and diagnosis, that right is likely not being met within Nunavut’s health and education departments.

“It’s about systems not actually realizing that they are violating the rights of children and even adults and their families,” said Jennifer Noah, the executive director of the Piruqatigiit Resource Centre in Iqaluit.

Piruqatigiit is a new non-profit organization in Iqaluit set up to help people and families living with FASD.

Experts say that FASD, short for fetal alcohol spectrum disorder, a permanent disability, is more widespread in Canada than autism or Down syndrome, two other disorders that receive far more funding and public attention.

In Canada, the annual cost to the economy associated with FASD is about $1.8 billion and the lifetime cost per person with FASD is $1.12 million, Dr. Svetlana Popova of the Centre for Addiction and Mental Health reported in a study published in 2015.

The term “FASD” covers a wide range of lifelong cognitive and physical deficits caused when a fetus is exposed to alcohol inside a mother’s womb.

Though the disability is believed to be widespread in Nunavut, the 2007-08 Inuit health survey, conducted in Nunavut, Nunatsiavut and the Inuvialuit region, reported no information on alcohol consumption by pregnant mothers and no other data on the prevalence of FASD.

And Nunavut’s minister of education, David Joanasie, said last March that while he knows of numerous children in school with undiagnosed FASD, the department is not able to track them. 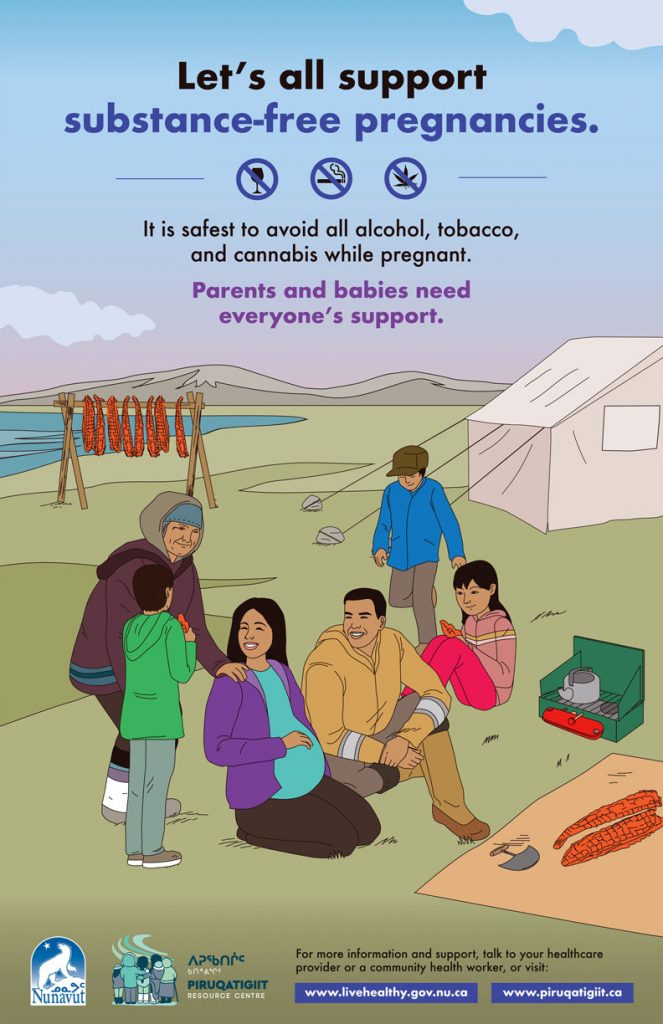 It is not safe to consume any amount of alcohol during pregnancy, experts say. But the 2004 Qanuippitaa survey in Nunavik, a region with a culture and history that is similar to Nunavut’s, reported that 44.2 per cent of women surveyed in Nunavik reported drinking alcohol during their last pregnancy. (Image courtesy of the GN)

In 2011, another survey based on a smaller sample of Nunavik women, found 61 per cent reported drinking during pregnancy, and that 38 per cent of pregnant women reported binge drinking.

And Svetlana Popova, a scientist at the Centre for Addiction and Mental Health, told Nunatsiaq News last week that vulnerable populations, such as Indigenous people, suffer from FASD at rates 10 to 40 times higher than the general population.

Since no amount of alcohol, cannabis or tobacco is considered safe to consume during pregnancy, this suggests there are many people in Nunavut whose FASD is hidden or unknown to them or others.

Noah, based on her experience with addictions and counselling, agrees with that kind of assessment.

“I will say that FASD is far more prevalent than we can imagine, not only in Iqaluit and Nunavut, but in all places. FASD is four times more common than autism and Down’s syndrome combined,” Noah said.

“We are not at all suggesting that it is only an Inuit problem. It’s absolutely everywhere that there is alcohol. But it is time that we do some level of service provision,” she said.

FASD, if not screened for or diagnosed, can become a permanent barrier to getting a job or even training that could lead to a job.

That’s because FASD often damages memory, the ability to learn how to use language to communicate, and social skills required for labour force participation.

For that reason, Piruqatigiit wants to offer a certificate program to train service providers for people with FASD, Noah said.

“We’re trying to train front-line service providers so they can be FASD- and trauma-informed, so they can do a better job of being aware of the unique needs and challenges and strengths of people with FASD,” she said.

Helen Roos, the executive director of the Ilinniapaa Skills Development Centre in Iqaluit, also agrees that people with unscreened and undiagnosed FASD have basic health-care rights that Nunavut may be ignoring.

Right to know about one’s own health

Roos said this means that unacknowledged FASD is a big barrier to labour market participation.

“In my seven years, especially my six years in working in pre-employment training with Inuit, we see it [FASD] in spades,” she said.

“It becomes a barrier. They are not screened in elementary school or high school.”

That’s because people with FASD often struggle with language and memory problems that make it difficult for them to understand instructions that are given to them in the workplace.

And that, in turn, means that such people will find it extremely difficult to train for jobs in Nunavut’s two biggest industries: mining and government.

“In mining, where everything is health and safety and wellness, and safety is number one, if you can’t remember safety precautions for yourself, you’re not going to be able to work in that environment. In government you need high rates of literacy.” she said.

But that doesn’t mean that people with FASD are doomed to a life of unemployment.

“There are employment opportunities, but they require job coaches,” she said.

For Iqaluit-Manirajak MLA Adam Arreak Lightstone, it’s crucial that the Department of Education identify children with FASD and offer them help, as early as possible.

“Early intervention is crucial for those living with FASD, as we must assist them to learn to live with their disability before it is too late,” Lightstone told Nunatsiaq News

“I believe that the Department of Education must consider this a priority by offering training to our school faculty to identify students who show symptoms of FASD,” he said.

But right now, very few Nunavummiut with FASD appear to be screened or diagnosed in Nunavut, Roos said, except for a few who were fortunate enough to have moved to the south.

“They never got any assistance with screening or diagnosis unless they grew up in or moved to the south, in Montreal or Ottawa, or were picked up, in the Kitikmeot and got screening through Stanton hospital in Yellowknife,” Roos said.