Feds to clean up Nutrition North 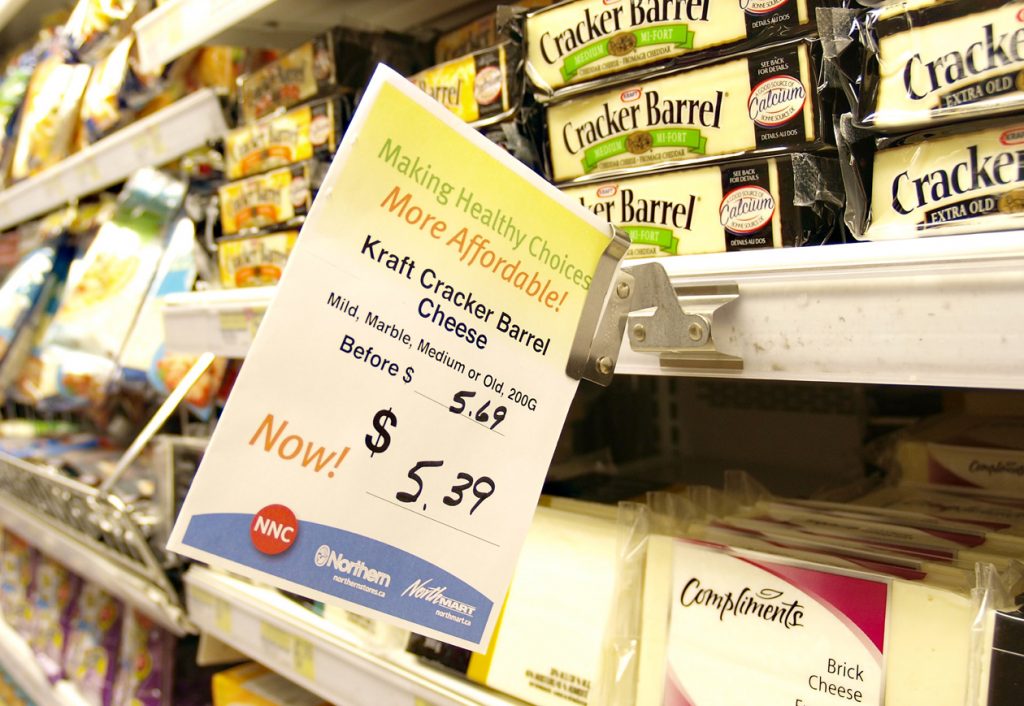 On August 21, the Government of Canada announced new items have been added to Nutrition North’s subsidy list, beyond perishable food items. (File photo)

The Government of Canada is working to clean up and shape up the Nutrition North Program with additional subsidies, more accountability and the roll-out of a harvesters support program, first promised last November, but beginning this winter.

Mere hours before cutting the rope on the Canadian High Arctic Research Station in Cambridge Bay, Yvonne Jones, parliamentary secretary to the minister of intergovernmental and northern affairs and internal trade, was at the Luke Novoligak Community Hall on Wednesday, Aug. 21, to announce changes to the food subsidy program that has been steeped in controversy.

Most recently, research published in the Canadian Medical Association Journal found that food insecurity had actually worsened in Nunavut under Nutrition North, according to data from the Canadian Community Health Survey. A reason for this given by the researchers was that it targeted perishable store-bought foods only accessible to more affluent northerners—with or without a subsidy.

In Cambridge Bay, Jones announced an additional subsidy of $1 per kilogram will be added to certain non-perishable products transported by sealift, barge or winter road. By targeting these cheapest methods for transporting goods, the hope is that subsidy will benefit the most vulnerable people, rather than those who can afford a costlier purchase.

As well, in an effort to address the health and well-being of women and girls in the North, feminine hygiene products will be subsidized at the program’s highest rate, year-round. Currently, a box of tampons can cost between $15 and $20 in Iqaluit, compared to less than $10 in southern cities.

The Harvester Support Program, which will put money in the hands of harvesters, will bring Nutrition North more in line with the needs of northerners in allowing better access to country food rather than encouraging reliance on store-bought food.

“Throughout the public engagement process, Northerners most often expressed the need for further support for traditional harvesting,” said former NWT premier and Nutrition North Canada Advisory Board Chair Nellie Cournoyea in a release on the December announcement.

“That is why we particularly welcome the Government’s commitment to introduce a Harvesters Support Grant to help lower the high costs associated with traditional hunting and harvesting activities.”

Much of the controversy around Nutrition North, which in 2011 replaced the Food Mail Program, has centred around a lack of transparency and accountability for who exactly the subsidy was benefiting: the supplier and retailer, or the customer.

One move to address this was requiring receipts from the point of sale to display the subsidy applied through Nutrition North.

The announcement introduced a northern-based Compliance and Review Committee who will be appointed on the advice of the Inuit-Crown Working Group and the Indigenous Working Group, which include representatives of the four Inuit land claim organizations, as well as Inuit Tapiriit Kanatami.

The terms and conditions of the committee are still being worked on by the partners, but the committee will look over audits of the Nutrition North Program, have a hand in the review and help the government shape the program to better fit its mandate, that is, to play a part in addressing food insecurity in Canada’s remote and Indigenous communities.

The additional subsidies are estimated to cost about $3 million over the program’s $14-million budget.

This story was updated with additional details about the Compliance and Review Committee.