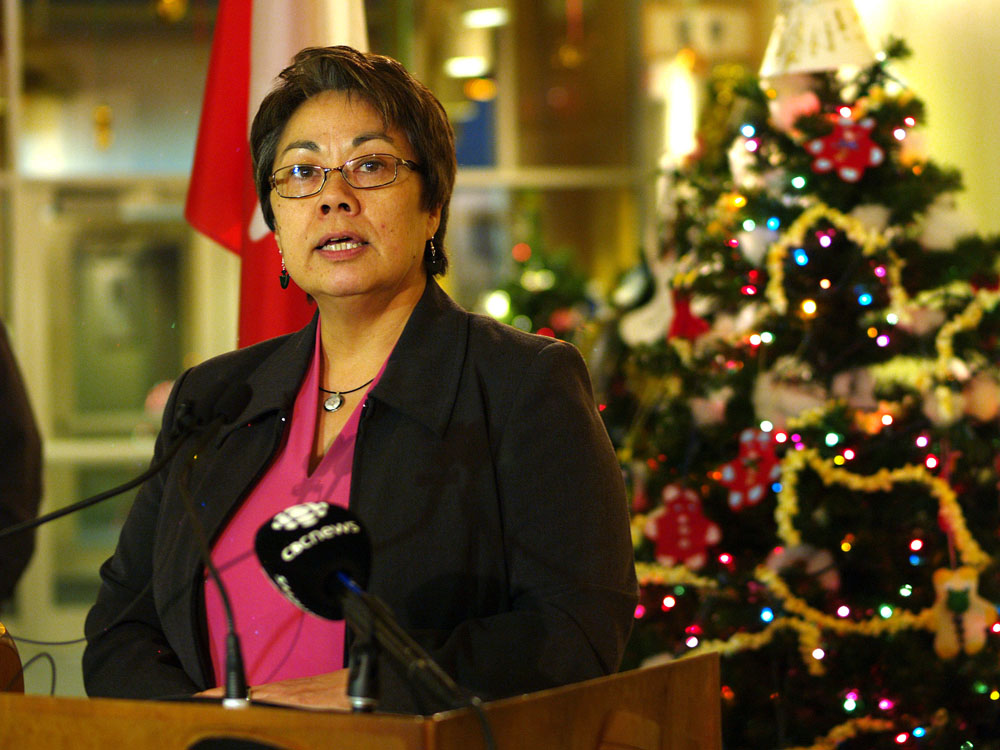 Eva Aariak at a news conference in Iqaluit on Dec. 12, 2008, soon after she had become the second person to serve as premier of Nunavut. (FILE PHOTO)

Eva Aariak, the former Nunavut languages commissioner and premier, will become a member of the Order of Canada, Governor General Julie Payette announced Dec. 27 in a year-end announcement.

She’s receiving the honour for “her lifelong dedication to promoting Inuit culture and languages as a public servant and politician,” the governor general’s office said.

She’s one of 86 people who Payette named as members of the Order of Canada. As for the order’s higher ranks, an additional 15 people will become “officers” and another two will become “companions.”

They’ll all receive their honours at Rideau Hall in a ceremony to be scheduled sometime in 2019.

Aariak, who is originally from Arctic Bay, served as Nunavut first languages commissioner from 1999 to 2004.

She was appointed to the position again in 2007, but stepped down to run in the October 2008 territorial election as a candidate in the constituency of Iqaluit East.

Aariak won the seat with 63 per cent of the vote. In November of that year, MLAs chose her to serve as Nunavut premier, a position she held until the fall of 2013.

After announcing she no longer wished to serve as Nunavut premier, she contested the newly created seat of Iqaluit-Tasiluk in the October 2013 territorial election, but lost to George Hickes.

Aariak later served on the Pikialasorsuaq Commission, an international body set up by the Inuit Circumpolar Council in January 2016 to make recommendations on the future management of Pikialasorsuaq, also known as the North Water polynya.

Most recently, she served as the Qikiqtani Inuit Association’s chief negotiator in its talks with the Baffinland Iron Mines Corp. on a revamped Inuit impact and benefits agreement for the Mary River iron mine.

Another person whose name is well-known in northern Canada will also become a member of the Order of Canada: Charles Edgar Fipke, better known as “Chuck” Fipke, of Kelowna, B.C.

In 1991, Fipke, a legendary geologist and founder of Dia Met Minerals , discovered the kimberlite pipe that led to the first diamond mine in North America, the Ekati mine near Lac de Gras.