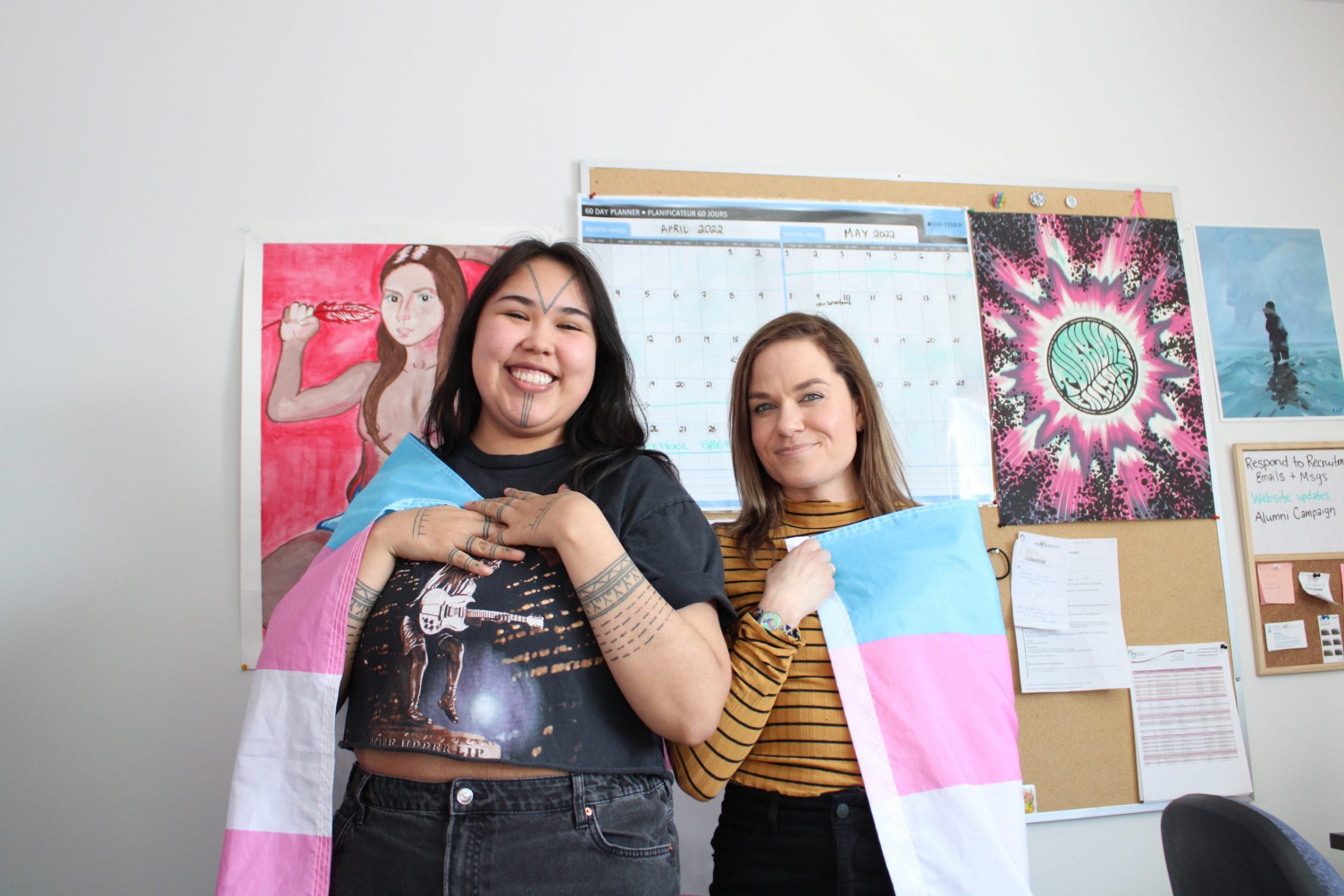 Dayle Kubluitok (left) and Bibi Bilodeau pose with the trans pride flag in their office at the Nunavut Arctic College on Mar. 18. (Photo by David Venn)

Kubluitok, an Iqaluit resident who is non-binary and uses the pronoun they, said it’s been difficult to get access to these services in the territory.

“I had to be dramatic about it,” Kubluitok said, adding health-care professionals wouldn’t believe their problems.

“I had to bawl my eyes out, like, be at my breaking point for them to listen to me.”

Health Minister John Main announced Mar. 17 that the territorial government is partnering with the Metropolitan Centre of Surgery in Montreal to provide health care for transgender and non-binary Nunavummiut.

Some services include breast augmentation, chest contouring, hysterectomy, vaginoplasty and phalloplasty, as well as hormone therapy.

The Health Department says these services are for those who are eligible, but has not provided more information about what the criteria is.

Bibi Bilodeau is the president of an LGBTQ group called Positive Space, which works with Nunavut youth.

Policies like this can help reduce suicide rates in the territory, as transgender and non-binary people are among the most likely to attempt suicide, she said.

However, Bilodeau said she worries that even if these policies exist, there will be a lot of gaps in implementation that need to be filled, such as informing people that these options are available to them.

One way of fixing that is for the government to train and support teachers in working with queer youth, and ensure that its employees know how and when to help people access these services, Bilodeau said.

The alternative is the responsibility falling on people like her and Kubluitok, who is also a member of Positive Space, to give medical and mental health support when they aren’t professionals in that field, but part of the queer community.

“The government hasn’t caught up with the work that we’re doing at a grassroots level,” Bilodeau said.

Bilodeau said as Positive Space grows, she wants to work with the government to help roll out policies like this to ensure those gaps are closed.

Another important aspect of sexual health that the government can work on is building support for the queer community at LGBTQ pride flag-raising events, for example, that match the support received for other causes, like Pink or Orange shirt day.

“[Educating people on how to support] LGBTQ people — it’s the easiest way to take a very vulnerable, at-risk part of the population and make us healthy,” Bilodeau said.

“We’re not an issue to be solved. All we’re literally asking for is we want to be integrated. We want to be supported.”