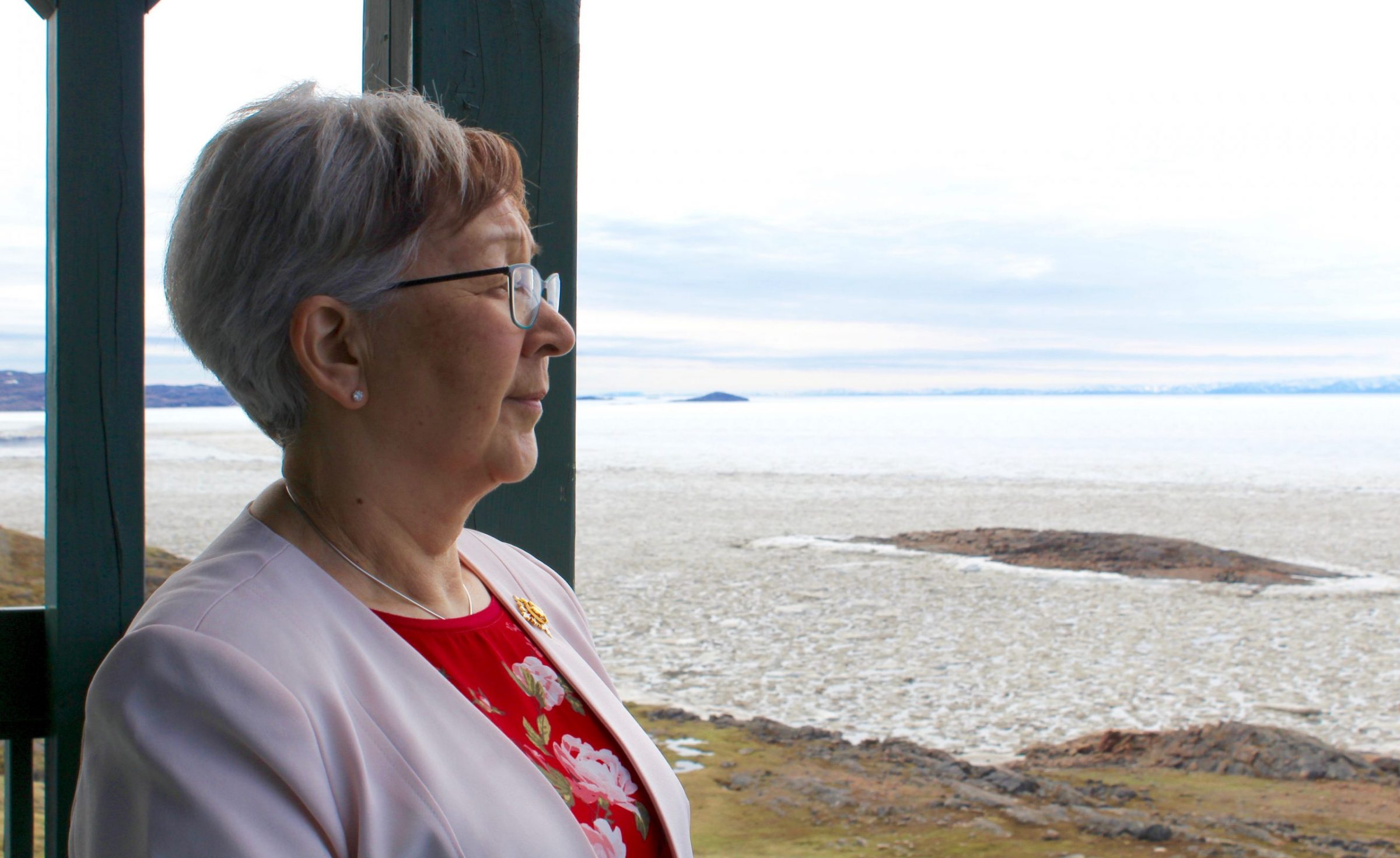 Nellie Kusugak, who finished her term as commissioner of Nunavut last week, looks out across Frobisher Bay from her office in Iqaluit. (Photo by Emma Tranter)

Sitting in her Tundra Valley office in Iqaluit on the day before she left, she looks out her window to a panoramic view of Frobisher Bay.

“There’s many negative things said about Nunavut, but just look at my view right here. I wouldn’t live anywhere else,” she said.

One of her fondest memories, she explains, is from her first year as commissioner, during a Christmas lunch at the elders centre in Iqaluit. When she arrived, she found the caterers had mixed up the dates, and there was no food for lunch.

Luckily, Kusugak had a plan.

“I said OK, I have enough country foods at my place. I’ll bring them all here and we can find an axe and can cut up the caribou …. it had a lot of fat on it,” she said.

“A lot of it was from the Kivalliq, so that was good.”

And when the caterers found out about the date mix-up, they started making turkey soup.

“They were quite excited about it,” Kusugak said, referring to the elders.

“As commissioner, you go to all these happy events acknowledging people.… Nobody volunteers to be recognized for the things that they’re doing. They do it because they love their community, they love the people and want to improve life in the community,” she said.

“It’s been an absolute honour and privilege to be the Commissioner of Nunavut.”

Over the years, she received invitations to countless ceremonies, conferences and events.

“I went on trips only if it had to do with Nunavut,” she said.

As commissioner, Kusugak’s role was to represent the interests of Nunavummiut and act as the territorial head of state. Her official duties included giving royal assent to bills passed by the legislative assembly, swearing in MLAs and cabinet ministers, and signing off on documents such as commissioner’s warrants and orders in council.

A former teacher in public schools in the territory and at Nunavut Arctic College, Kusugak is an advocate for education.

“To keep going to school, to never stop learning in life because you learn new things until you’re gone … that’s so important,” she said.

And as an advocate for language and culture, Kusugak said she always made sure she spoke Inuktitut when giving speeches as commissioner.

“I didn’t necessarily have to do any English unless there was a mostly English audience. But before I talk in the south, I always introduce myself and give greetings in Inuktitut first,” she said.

Growing up, Kusugak’s home acted as a shelter for women and children. As commissioner, she says that experience helped her to bring awareness to violence against women and girls in the territory.

“You can’t just say, leave your partner. It’s not that simple. There has to be other solutions where both of them get counselling and help.… I think it’s really, really important that you be there to listen and support and hopefully they’ll be strong enough one day and deal with it then, for the sake of the children and themselves,” she said.

While living in Iqaluit, Kusugak also started a widows’ group for women. Kusugak’s husband passed away nine years ago.

The idea came to her after an interaction at an elders lunch in Iqaluit, she said.

“A lady came up to me and she took me here,” she said, motioning to her shoulders. “She said, ‘Do you still miss him too?’ And that was the opportunity for me to ask her what she thought of us creating a group for widows.”

“That really helped to, I think, heal and know that you’re not alone. There are other women who completely understand you.”

As for the future of the territory, Kusugak said she is optimistic, but that collaboration is required to create change.

“To me, it’s really, really important for people to put our language, our culture, and tradition first.… There’s really … no time for regions fighting against regions or disagreeing,” she said.

And for young Nunavummiut, Kusugak’s message is to “be proud of who you are and where you come from.”

Kusugak is now back in Rankin Inlet with her family and plans to spend time with her 87-year-old mother, who lives in the elders facility in Arviat.