If COVID-19 strikes, this Nunavut community is ready

Rankin Inlet has sites for screening, quarantine and hospital treatment 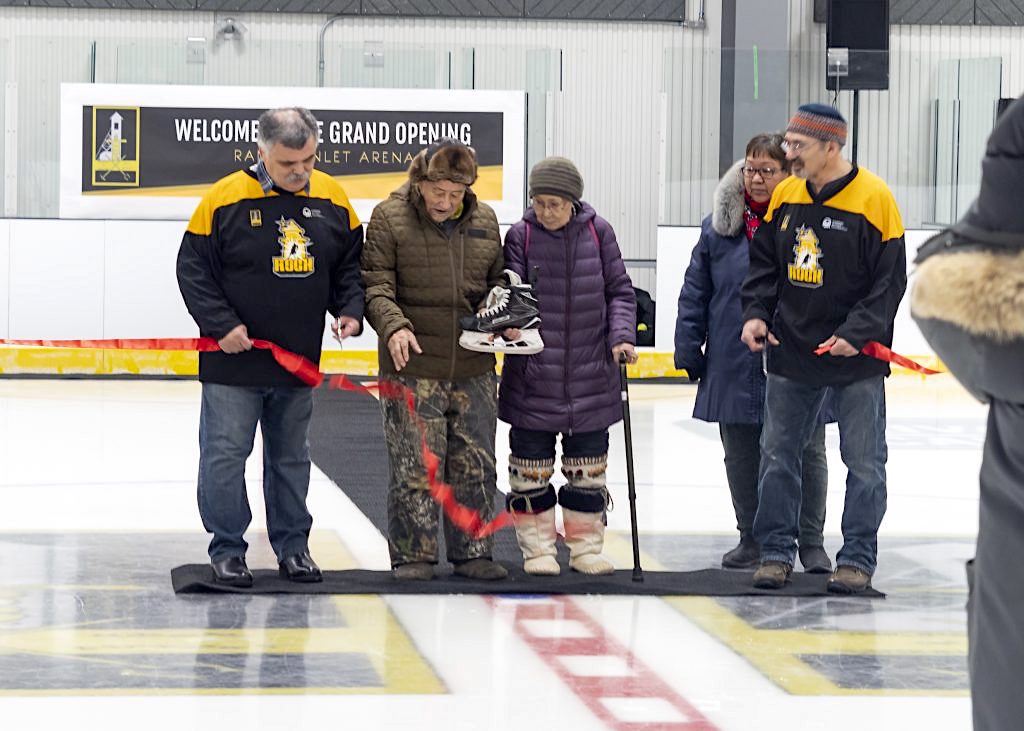 Rankin Inlet’s Maryanne Tattuinee, deputy mayor Martha Hickes and mayor Harry Towtongie celebrate the opening of the community’s new arena with a ribbon-cutting ceremony on Nov. 23, 2019. Now the arena could be repurposed as a hospital, if needed. (Photo by Doug McLarty/ArcTech Design and Services)

Rankin Inlet’s new $26-million arena is ready to step up as a makeshift hospital, if the new coronavirus hits the central Nunavut community of about 3,000.

“We’ve done what we can to prepare,” said Mark Wyatt, Rankin Inlet’s fire chief and manager of protective and emergency services, who is part of a community-wide team that has been working to prevent and prepare for possible COVID-19 cases.

So far, Nunavut has no confirmed COVID-19 cases.

Meanwhile, Rankin Inlet, like other communities in Nunavut, has been more fortunate than other places in the world for another reason, Wyatt said: they have been able to learn from COVID-19 preparations and actions that have taken place elsewhere.

“And per capita there is probably more awareness here about the virus,” Wyatt said.

Rankin Inlet’s arena, which opened last November, has year-round ice-making capability, facilities such as changing rooms and washrooms and spectator viewing for up to 900 people.

The arena floor could accommodate many rows of hospital beds, Wyatt said.

The hockey season in Rankin Inlet came to an abrupt end in March when the Government of Nunavut ended all gatherings and discouraged all unnecessary travel to contain the spread of COVID-19.

The decision to postpone Rankin Inlet’s 2020 Terence Tootoo Memorial Tournament was made by the tournament committee, in consultation with retired NHL player Jordin Tootoo, brother of the tournament’s namesake, Terence.

To prepare the arena for its use as a possible hospital, the ice was melted and the cement surface cleaned.

While some had mentioned the Forward Operating Location in Rankin Inlet as a possible place for this purpose, Wyatt said that would not have worked because the facility had not been used recently and requires some repairs.

There are no beds yet in the arena, but, according to need, these could be set up, with the aid of Canadian Rangers or other military assistance.

The Kivalliq Hall residence and Nanuq Lodge have also been earmarked as possible quarantine areas for those suspected of having COVID-19 or recovering from the virus, if needed, Wyatt said.

The hamlet has also set up a COVID-19 screening area, but to date, it hasn’t been used, although many residents are in self-isolation, he said.

To keep residents healthy, the food bank is handing out coupons for those in need, and hampers of food and cleaning supplies have been distributed, with the support of Agnico Eagle Mines Ltd.

The mining company also gave $11,500 to keep the community radio station on air after bingos, its major source of money, were cancelled due to the chance of spreading the virus.

But Rankin Inlet’s two biggest challenges for now are ensuring they have enough personal protective equipment for all emergency responders and health workers and dealing with an issue that lies beyond their control—the overcrowding in homes, Wyatt said.

That means many children, who are not in school, are more likely to be out and about.

Outside hockey rinks, which the hamlet made after the arena closed, had to be ploughed over because too many kids were using them.

“Kids are kids and don’t realize what social distancing is when they’re playing,” he said.

But “everyone is doing their best.”

Their community has become quiet as many have headed to cabins outside town and the usually busy airport has almost no traffic.

Air travel to and from the nearby Meliadine gold mine, which is now under a lockdown, has also been reduced, as part of Agnico Eagle’s effort to limit any spread of COVID-19 into the community.

Wyatt said he wanted to commend the Government of Nunavut for limiting access to Nunavut to keep COVID-19 out of the territory.

“Now, we’re keeping our fingers crossed like everyone else,” Wyatt said.