“It’s reassuring to me that even though I’m not trying to do it, I keep seeing Inuit imagery in the swirls” 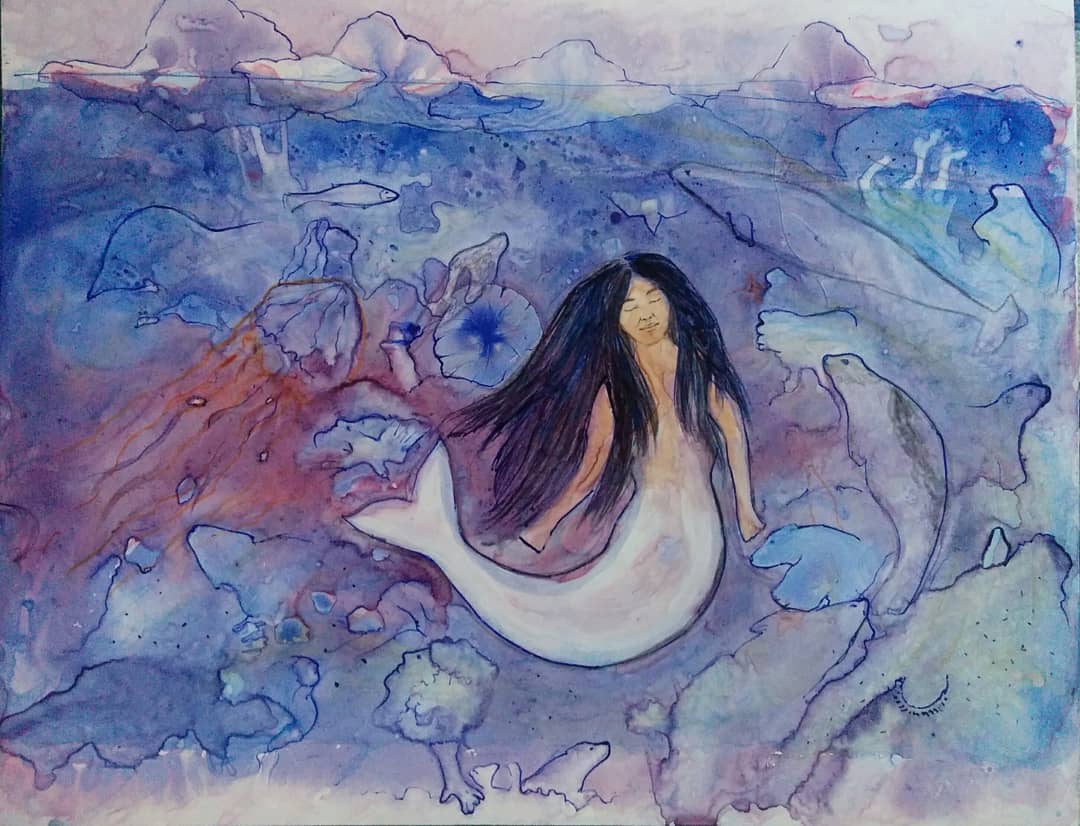 Heather Campbell’s “Nuliajuk and Icebergs,” created with pen and ink on paper, which is featured at La Guilde’s “Nunatsiavut / Our Beautiful Land” exhibit in Montreal. (Photo courtesy of Heather Campbell/Facebook)

It’s a question that Nunatsiavut artist Heather Campbell has had to field before. Her technique, which combines abstract ink backgrounds with subjects outlined in pen, creates dynamic scenes based on Campbell’s culture—but it doesn’t always align with the expectations of those who associate Inuit art with printmaking and carving.

“I had one of the participants [at a workshop] basically ask me like, you know, was this kind of an authentic Inuit art tradition?” Campbell said.

Campbell’s art is currently featured at Montreal’s La Guilde gallery, in the “Nunatsiavut / Our Beautiful Land” exhibit. Curator Heather Iglioliorte reached out to 25 Inuit artists to create work on the themes of land and territory. The exhibit opened on Oct. 3 and ends this Sunday, Nov. 24. 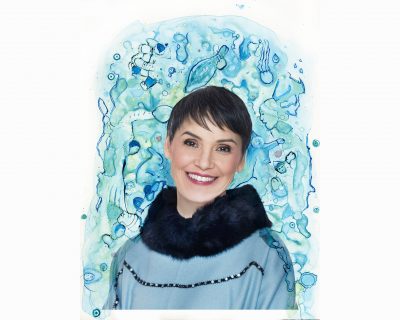 An example of Heather Campbell’s artistic treatment of Mòshkamo’s promotional photography, in this case a photo of Susan Aglukark. (Photo courtesy of NAC Indigenous Theatre Facebook)

Campbell also recently led a workshop at the Labrador Creative Arts Festival, at the Art Gallery of Windsor in Ontario and at La Guilde at the beginning of the Nunatsiavut exhibit. In September, she led a workshop at the National Art Gallery’s Mòshkamo festival and did an artistic treatment of the festival’s promotional photography using her technique.

Campbell didn’t start creating her art with ink and pen. She initially learned to paint at Memorial University and focused on oil painting before she found her ink method.

She starts by wetting paper and then dropping ink on the surface, where it creates swirls and blotches of colour. When the ink dries, Campbell draws on top, outlining the shapes she sees in the swirls.

She compared it to finding shapes in clouds. “So it’s like an automatic drawing process,” she said, “where I’ll look to see what I recognize in those shapes.

The method is fairly simple, Campbell said, but a messy process. It requires a lot of flicking and splattering to get the ink on the paper, and in her September workshop at the National Arts Centre, Campbell found participants were tentative because they didn’t want to mess up the room.

When people join her workshops, Campbell says she doesn’t just want people to learn about her artwork and technique, but about Nunatsiavut too.

“A lot of people don’t know that Inuit are even living in Newfoundland and Labrador,” Campbell said. So she likes to create awareness of the region and its culture when possible.

Nunatsiavut’s distinct culture comes through in its art, partially because the region hasn’t had the same market forces influencing style as Inuit have seen elsewhere. In comparison to Nunavut and Nunavik, “we have a very different relationship with the marketing and promotion of Inuit art,” Campbell said.

“I think in the early years, especially with printmaking, there was that emphasis towards traditional when it came to Nunavut and Nunavik. I don’t think we had those pressures in Labrador, so we had a bit more freedom to do what we wanted to do.”

“But at the other hand of that, we didn’t have any outside support, making sure that our work got from Labrador to the rest of Canada and the world, so the market wasn’t really there.”

Campbell said that awareness is changing, however. In recent years, audiences have shown an increased interest in Nunatsiavut art, and Campbell credited figures like Igloliorte for promoting the region.

Even though Campbell is most well-known for her ink and pen artwork, the artist likes to experiment with other art forms. For example, she’s also working on a documentary in Labrador about her grandmother, who Campbell says was “one of the first, if not the first, teacher of Inuit descent in Labrador.”

The artist plans to apply her ink technique to the film through animation.

Campbell also said she’s interested in starting to carve. “I think it’ll be fun. I’ve been trying to get my parents to collect driftwood for me, because I’m intimidated by stone.”

Even though Campbell’s been away from Nunatsiavut for years, she says that it’s reassuring how present the region and its culture remain in her life.

“It’s reassuring to me that even though I’m not trying to do it, I keep seeing Inuit imagery in the [ink] swirls,” said Campbell.

“When you have that foundation, in your family and in your community and in your culture, that’s something that’s going to stay with you for the rest of your life.”