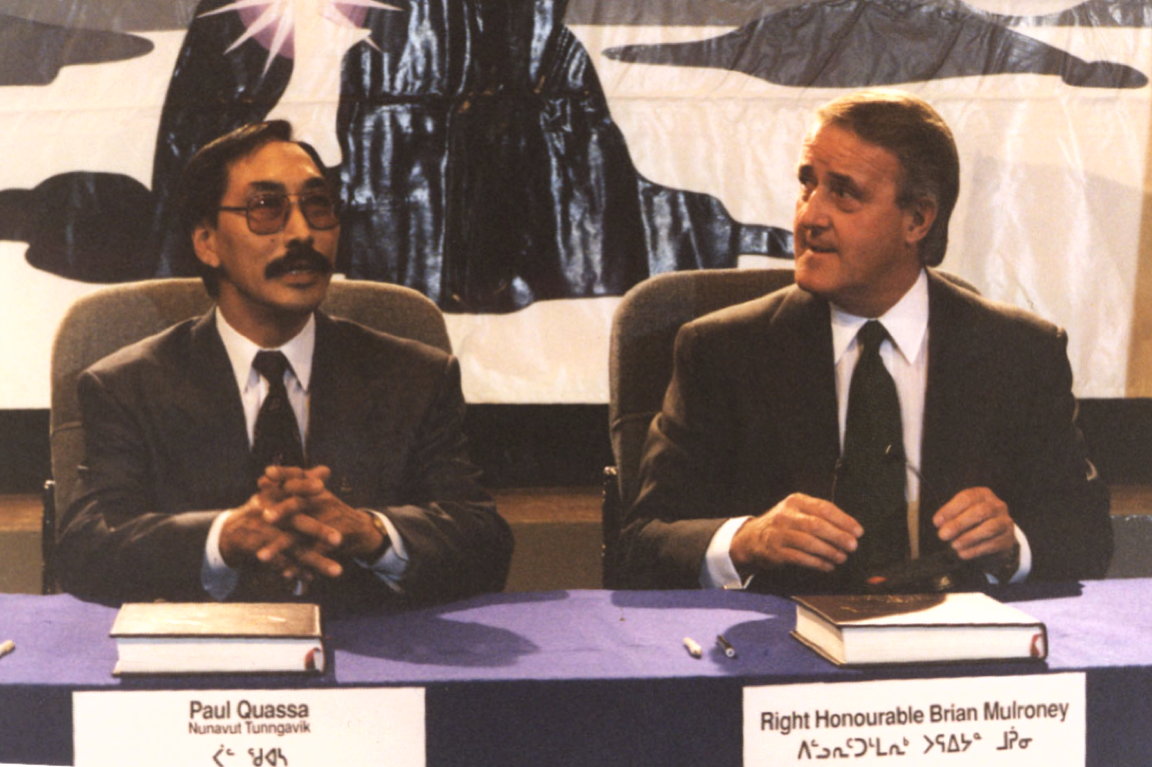 Paul Quassa, the president of Nunavut Tunngavik Inc., on May 25, 1993, in Iqaluit with Prime Minister Brian Mulroney at the signing of the Nunavut land claims agreement. NTI’s predecessor organization, the Tungavik Federation of Nunavut, had negotiated the final agreement following an agreement-in-principle signed on April 30, 1990, in Igloolik. (File photo)

Nunavut Tunngavik Inc. is marking the end of the International Year of Indigenous Languages by releasing a 30-year-old federal cabinet document that they allege “blocked use of Inuktitut in government services in the territory.”

In the document, prepared on March 13, 1990, for the Progressive Conservative government of Brian Mulroney, a federal cabinet committee describes making a big decision on land claims talks between Ottawa and NTI’s predecessor, the Tungavik Federation of Nunavut.

Like all other federal cabinet documents, that decision document was kept secret for 20 years.

But it’s now in the public domain and NTI acquired it recently through an access to information request.

On March 20, 1990, the powerful priorities and planning committee of cabinet, the so-called “inner cabinet,” chaired by Mulroney himself, ratified the decision.

But NTI alleges the cabinet decision document constitutes proof that “Prime Minister Mulroney and his cabinet knowingly and deliberately blocked use of Inuktitut in government services in the territory.”

That’s because of a paragraph in the cabinet document that says the final land claims agreement must not “provide general linguistic guarantees for use of Inuktitut in government and the legal and educational system in the claims area.”

“By blocking linguistic protection in the land claim, the Government of Canada and its negotiating team blocked Inuit from constitutional legal recognition of Inuktut language rights,” NTI said in a news release.

The cabinet document coincides with the Supreme Court of Canada’s famous Mahé decision, which said Ottawa must fund French-language schools outside Quebec “where numbers warrant.”

In the same news release, Ian Martin, a professor at York University in Toronto, says the cabinet decision amounts to a “secret denial of rights to the Inuit of Nunavut.”

And Aluki Kotierk, the president of NTI, said she now fears for the ability of Nunavut Inuit to get government services in their language.

“I am concerned for the safety and wellness of Inuit today, in their daily struggle to access essential government services,” she said in the release.

A month later, Siddon signed the Nunavut AIP in Igloolik on April 30, 1990, amid much fanfare and celebration, in a ceremony that’s still considered one of the landmark events on the road to Nunavut.

The absence of any linguistic guarantees in either the Nunavut AIP or the final agreement did not become much of a public issue at that time—and Inuit leaders did not raise any public objections.

In the campaign to get the deal ratified, most of those leaders never mentioned the omission of constitutionally guaranteed language rights.

Instead, nearly all Nunavut leaders enthusiastically promoted the final land claims agreement, and urged Inuit beneficiaries to vote yes to it in a referendum held in the fall of 1992.

At the same time, the Northwest Territories had already declared the Inuit language an official language in 1984, through the first territorial Official Languages Act, which Nunavut inherited in 1999.

And through the final version of Article 4, the Mulroney government eventually put words into the land claims agreement that guaranteed the creation of a Nunavut public government in a parallel process outside the land claim.

Article 4 also guaranteed passage of the Nunavut Act, which gave the Nunavut territorial government the power to pass laws aimed at the preservation, use and promotion of the Inuit language.

But permission to create legislated, as opposed to constitutional language rights, isn’t enough for NTI.

“As 2019, the International Year of Indigenous Languages, comes to an end, I urge the federal government to do the right thing and uphold and support Inuktut language rights so that Inuktut may continue to thrive,” Kotierk said.

In 1997, the Nunavut Implementation Commission, the planning body for Nunavut that grew out of Article 4, and whose members were almost all Inuit, took a close look at language policy for the territory.

As a result, they said in their Footprints 2 report that public preferences regarding language in Nunavut were unclear.

They also said that official status and constitutional guarantees do not necessarily guarantee the health of a language.

“Rather, a satisfactory and secure place for the Inuit language in Nunavut depends on weaving together a thoughtful, do-able and affordable combination of government, private sector and personal decisions and initiatives that address the use of the Inuit language in a wide range of relevant societal circumstances,” the NIC said in its Footprints 2 report.

NIC members pointed to the need for a common writing system for the Inuit language and organized a big, Nunavut-wide language conference in Iqaluit in March 1998 to talk about that and other language issues.

The NIC released a lengthy report that focused primarily on a standardized writing system—but like the conference, that report now appears to be long forgotten.