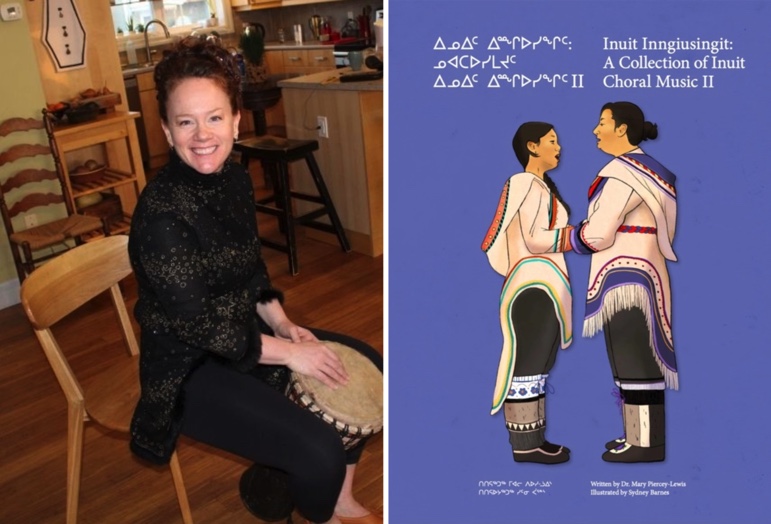 When music teacher Mary Piercey-Lewis first arrived in Nunavut in 2001, she was surprised to find there was no formal music curriculum to teach from.

“There were absolutely no music resources for Inuit music,” she said, thinking back to her early music lessons in Arviat.

“There was lots of amazing music happening in communities, but no resources to really pull upon to use in the classroom, especially for high school.”

Piercey-Lewis — who in 2021 was named the Juno Awards’ Musicounts Music Teacher of the Year and won the Prime Minister’s Award for Teaching Excellence — knew that music could be a powerful tool for promoting Inuit culture and for helping students to connect with their Inuit identity.

So, with no formal curriculum to pull from, she got to work creating her own music resources for students.

One of those tools is the music textbook Inuit Inngiusingit: A Collection of Inuit Choral Music II, a new performance-based songbook centred around choral singing in Inuktitut for students in the classroom.

Piercey-Lewis, who is from Fortune, N.L., and has a PhD in ethnomusicology, now teaches music at Inuksuk High School in Iqaluit. She put together the songbook after 20 years of learning Inuktitut songs from across Nunavut and transcribing them into music notations.

“You need to have something down on paper in order to be able to have a large group of people learn a specific piece of music,” she said.

Published by Iqaluit’s Inhabit Media, the textbook is the second in a series following an earlier collection in 2016. This new songbook mixes traditional Inuit music like throat songs with tunes from contemporary Inuit artists like Susan Aglukark, the Jerry Cans, The Uvagut Band and Looee Arreak.

They’re all songs Piercey-Lewis has sung with the Inuksuk Drum Dancers, a student choir she leads at her school.

“In the past, people have put together children’s songs and those types of things in Inuktitut … but we’re looking for regular, fun-type songs to sing that aren’t children’s songs,” she said.

Alongside the sheet music and an audio CD, each song in the textbook includes lyrics written in Inuktitut syllabics and Roman script, and translated into English and sometimes French.

“Our youngest students, a lot of them are learning Inuktitut as a second language … so having the translation is really important for anyone who wants to connect to the meaning of the song.” Piercey-Lewis said.

“And then, of course, when they’re learning the translation or speaking even with the Inuit singer songwriters, they’re getting that really strong meaning of what the poetry of the song means. It’s a way of learning Inuktitut that’s real, that’s connected.”

One of her students’ favourite songs is Inuusivut (or Our Ways) by Iqaluit’s own Uvagut, which Piercey-Lewis calls a really lovely song about being proud of who you are.

“One of the verses says, ‘Let’s look to our elders, to find out how things were done in the past so that we can remember them,’” she said.

“It talks about how parents pass on a cultural language to their children.”

The Jerry Cans song Iqqanaijarumannittunga (sometimes spelled Iqanajarumanngittunga) is a “fast, upbeat” tune Piercey-Lewis said is always a big hit with her students.

Teaching contemporary songs in Inuktitut exposes students to more local artists, some of whom have even visited her classes to sing with the students.

“Most of them are so happy to be able to have their music as a part of our curriculum, but with the textbook they can be a part of anybody’s curriculum now and their music will be spread far and wide,” Piercey-Lewis said.

“Anybody who wants to connect to the culture through music can use the book.”