Shauna Seeteenak is the only musician from Nunavut; she’s up against hundreds of performers from across Canada 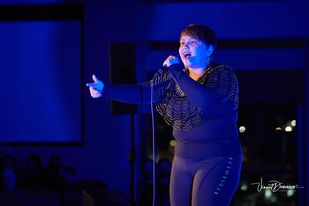 Shauna Seeteenak is the only musician from Nunavut to participate in the CBC’s 2022 Searchlight contest. (Photo by VDOPro.co)

Inuk hip-hop artist Shauna Seeteenak hopes CBC’s Searchlight will be her ticket to the spotlight.

Online voting has opened for the annual search for undiscovered talent and Seeteenak — the only musician from Nunavut participating this year — faces competition from hundreds of performers from across the country.

The winner of the 2022 Toyota Searchlight contest will get prizes including access to Studio Bell at the National Music Centre in Calgary through a five-day residency, and a spot in the Allan Slaight Juno Master Class, a talent development program where the winner’s music is reviewed by Juno Award-winning artists and producers.

The winner will also get a full promotional distribution campaign for their single or album, and a trip to Canada’s national music awards next year.

Originally from Baker Lake and currently based in Iqaluit, Seeteenak discovered when she was young that she could share her emotions and experiences in a healthy way through hip-hop music.

“I had a performance in elementary school for a talent show, and I really liked how it made me feel up there when I did the performance,” she said.

“It made me feel a lot better when I would write stuff out and sing it. So that’s when I decided I want to do music for the rest of my life. It’s like therapy to me.”

Seetenak’s music focuses on the truths and challenges facing Inuit, including breaking stereotypes, overcoming barriers and trying to heal.

In 2021, she released her debut album Therapy Sessions through Iqaluit-based record label Hitmakerz.

For Seeteenak, winning the contest would be another step toward making music an even bigger part of her life.

“I’m really looking forward to be able to learn how to perform better, be more interactive with the audience and just being a better artist,” she said. “Hopefully, I’ll be able to do music as a career and full-time.”

Online public voting for all the entries to this year’s Searchlight runs from May 19 to 30. People can cast one vote for up to five different artists each day.

The top 10 contestants will be named on June 21, and the winner will be announced June 28.