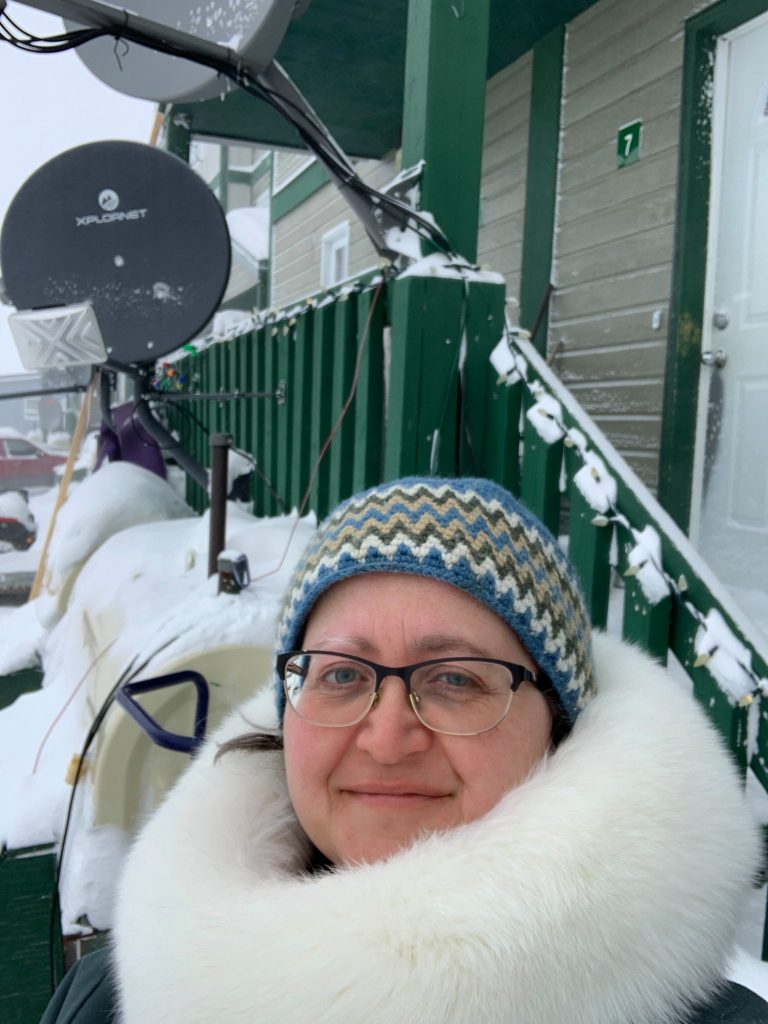 Bethany Scott smiles outside her condo along the Road to Nowhere in Iqaluit. Her insurance broker said insurance companies are being scared out of town by structural fires and the effects of climate change. (Photo by Thomas Rohner)

“We were told we were lucky to get insurance at all”

Condominium owners in Iqaluit say a sharp increase in insurance costs have forced them to the brink—and if recent trends continue, they will be squeezed out of homeownership.

That, in turn, would make Iqaluit’s housing crisis, including for the under-housed, even worse, officials say.

“We were told we were lucky to get insurance at all,” said condo owner Bethany Scott.

“If we didn’t get insurance, what would happen to our mortgages?”

It’s the commercial coverage that has seen a sharp increase across Canada in recent years.

Oram, the treasurer of her condo board, said that when she bought her condo in 2016 the commercial insurance was about $18,000 for 10 units. Her condo board has had one claim since then, Oram said. This year, after months of scrambling to find multiple companies willing to share the risk of the policy, the cost is just over $50,000. That’s an increase of 178 per cent in five years.

Condo fees have had to increase to cover the added expense, with some owners in Oram’s building paying nearly $800 per month on top of their mortgage and residential insurance.

“Our broker basically told us companies are trying to get out of the North….. I would like to feel like we’re not backed into a corner and forced to have one company and no options,” Oram said.

The Royal Bank of Canada told Nunatsiaq News that it sold its Nunavut insurance business to Aviva Canada a few years ago.

“I love my neighbours. It’s a quiet building, very respectful. And it’s nice having your own home, knowing that you’re investing in yourself,” said Oram. 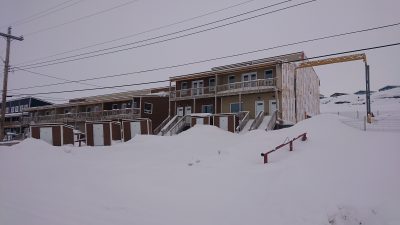 Condo fires, like the one that claimed half of this condo on the lower Plateau, are likely contributing to the sharp increase in commerical condo insurance in Iqaluit. Condo owners say their premiums have more than doubled in the past few years. (Photo by Thomas Rohner)

“It was $15,000 more than the quote we got, so we didn’t even raise our condo fees enough,” Scott said, adding her condo board has also had one claim in the last five years.

“It’s really unfortunate because developers in Iqaluit are putting up condos. We’re all being funnelled into this homeownership model, and the insurers are like, you’re too risky.”

Scott said she rents out a room from time to time, but with increased costs she’s having to charge more and more—pushing rent in Iqaluit, already among the highest in the country, even higher.

Scott said she loves her home—there’s a friendly vibe among her neighbours, who range from single-income families to retired government officials.

“Someone needs to advocate for us,” she said.

At the moment, there does not appear to be any advocacy for condo owners facing this issue on the local, territorial or national level.

Iqaluit Mayor Kenny Bell said this issue wasn’t on his radar until now.

“That’s obviously really scary, if you can’t get insurance for your home,” Bell said.

The mayor said that, since condo owners tend to be first-time home-buyers or single-income households, they play an important role on the housing continuum.

The housing continuum is widely accepted as the best approach to any community’s housing needs. The idea is that all levels of housing—from emergency to transitional and public housing to rentals and homeownership—are equally important in order to serve an entire community’s housing needs. Any negative change to one level of the continuum puts more stress on the other levels.

“Housing is a huge issue here, there’s a major lack of housing. So any time we can provide lower-cost units for people starting out, that’s really important,” Bell said.

Some professionals making $100,000 a year are couch surfing or unable to afford the increasing rents, Bell said. That puts those who are most vulnerable for housing at even greater risk, as it pushes them further outside the market, he added.

And if lower-cost homeownership is squeezed in Iqaluit, that means less tax revenue for the city and even more challenges for the Government of Nunavut’s efforts to move employees out of staff housing, said Bell.

“The GN just tried selling a whole bunch of condos and they weren’t really successful—maybe this is why.”

Despite multiple media requests to three different GN departments, the government was only able to provide limited information.

The government “is aware of an increase in condo insurance premiums for Nunavut residents and residents across Canada,” the Nunavut Housing Corp. said in an email.

“Condos may offer an alternative affordable type of homeownership to Nunavummiut.” 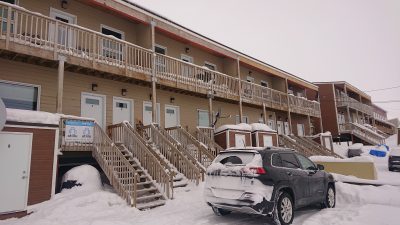 First-time homebuyers and single-income households may soon have even fewer housing options in Iqaluit, as some condo owners consider selling their units in the wake of sharp insurance cost increases. (Photo by Thomas Rohner)

In its most recent annual report, the NHC said the private housing market in Nunavut is “extremely limited,” contributing to more than half of the territory’s population being housed in public housing.

“To ensure sufficient affordable housing … there needs to be a diversity of housing options—a continuum of housing from emergency shelter to homeownership,” the report said.

The NHC and the Justice Department, which administers the Condominium Act, declined interview requests.

But the department did not respond to a request for an interview.

“Insurance regulators will continue paying close attention to this issue,” the department said in an email.

On the national level, the Canada Mortgage and Housing Corp. is a publicly funded arms-length government agency whose mandate includes the promotion of affordability and choice in the housing continuum.

The CMHC said that it too is aware of the sharp increase in commercial condo insurance across the country but does not have enough data to comment.

Instead, the CHMC directed Nunatsiaq News to the Insurance Bureau of Canada.

A spokesperson for the IBC said it doesn’t have data specific to Iqaluit, but severe weather events and other effects of climate change are resulting in more insurance claims across the country than ever before.

Since the idea of insurance is that many pay for the few, insurance premiums have gone up around the country, the IBC said.

And in Iqaluit, the cost of shipping up building materials during sealift, or even flying them up during the winter, adds even more expense, said the IBC.

When asked what condo owners in Iqaluit can do to reduce their risk of severe-weather-related claims, the IBC suggested limited options of proactive prevention.

“When there’s a large rain or snow storm, not having your windows open—that’s preventable…. If snow-load is an issue, they can make sure if they’re doing repairs and maintenance that they’re thinking about snow loads in the future as well,” the IBC said.

Insurance companies make money by charging premiums and by investing their profits, said the spokesperson. When claims are paid out, this is where the money comes from.

According to the IBC, the industry invested $117 billion in 2018. So its return on investments would have been $5.4 billion.