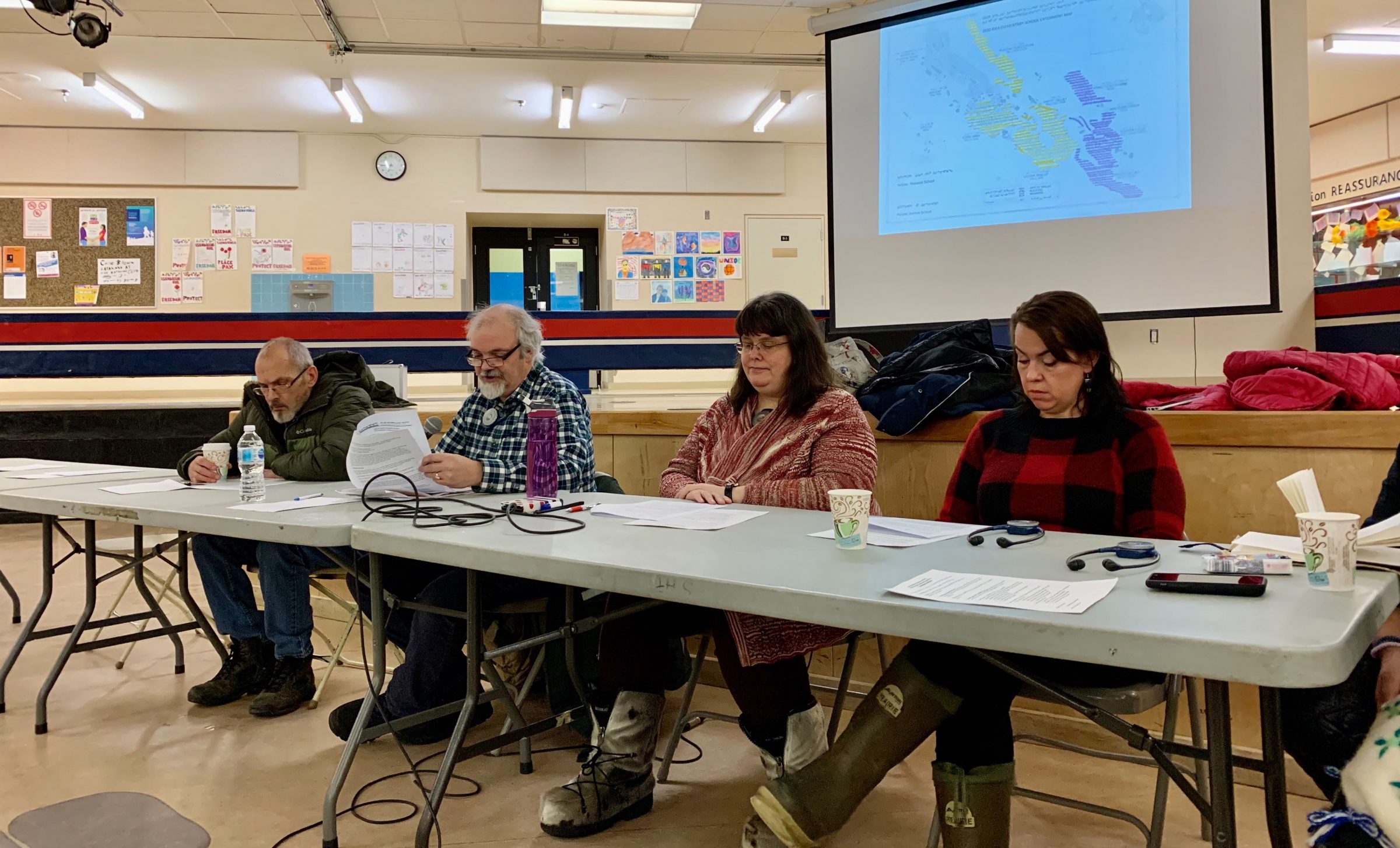 Schools in Nunavut’s capital could get new daily lunch programs if the Iqaluit District Education Authority has its way.

The IDEA presented a feasibility study for the proposal at its annual community consultation on Monday, Jan. 13.

A handful of community members attended the meeting, along with Iqaluit-Manirajak MLA Adam Arreak Lightstone and Nunavut MP Mumilaaq Qaqqaq.

A daily school lunch program at all of Iqaluit’s schools is something parents and educators have wanted for a long time, said Doug Workman, the IDEA’s chair. The proposal for the lunch program was brought up at last year’s IDEA community consultation.

“We’re looking for ideas on how to get there,” Workman said.

In Iqaluit, students are bused home during lunch hour. Currently, only Inuksuk High School has a lunch program, which runs three days a week.

Doug Workman, chair of the IDEA, worked with local chef Michael Lockley to conduct the feasibility study for the project. A report summarizing the findings of that study was presented at the community consultation.

The IDEA estimates that it would cost between $1.17 million and $1.22 million annually to provide a full-time school lunch program at all four of Iqaluit’s schools.

If all students in those schools participated, it would mean feeding 1,200 people each day, Workman said.

Julie Miller, who has four children in Iqaluit’s schools, told the board that at a minimum, supervision over lunch hour would be a step forward.

“From a parent’s perspective, it would be an easier transition on kids to go to school in the morning on the bus… be at school during lunch in a familiar space… then come home after school,” she said.

“I also think from an environmental perspective, in the community it would tremendously reduce traffic, the number of cars going home at lunch and what not,” she added.

The report proposes four options for how the program would run.

Option A involves hiring an outside food service like Aramark to run the program. That would require kitchen space, equipment, staff housing and salaries, among other things.

Option B involves using the existing kitchen at Inuksuk high school to make lunches for all the schools. The other three schools do not currently have enough kitchen spaces to accommodate daily meal preparation, Workman said.

The cost of providing food alone—excluding labour and equipment costs—to all four schools would range from $1,862 to $2,800 a day, the report states.

Option B also proposes a basic menu, which Workman said would allow for hiring local, inexperienced staff to be trained in food preparation rather than bringing up southern staff to run the program.

Option C is the same as Option B but would have a lunch service at Inuksuk High School only, with schools running on a staggered lunch schedule.

Finally, Option D proposes temporary kitchens to be set up in rented trailers.

Most people at the consultation preferred Option B, including Jason Rochon, a former Iqaluit city councillor.

“Could high school students possibly get credits for college if they were part of the solution of making lunches for children?” Rochon suggested.

“I think in Canada, we should never have anyone go hungry.”

For a full-time school lunch program in all four schools, the IDEA’s report presented the following estimated costs:

The IDEA would need to hire staff to run the program, including chefs, cooks, cleaners, drivers, servers, lunchtime chaperones and more.

The program would also require significant funding to cover food, equipment, salaries and insurance. Workman said the IDEA would need to fundraise to cover these costs.

The IDEA will discuss the lunch program further at its next board meeting. As well, a survey asking for feedback from families will be sent home in the near future.

A study from the Canadian Medical Association Journal that looked at reports of food insecurity in Nunavut’s 10 largest communities in 2014 found 46.6 per cent of households were food insecure.

The IDEA board also presented its 2020 community consultation report and asked for feedback on several consultation questions.

In its report, the IDEA board said it has been lobbying for an increase in student support assistants and for more resources to support students with special needs.

The board has been working to submit a proposal to the Government of Canada under Jordan’s Principle through the Inuit-specific Child First Initiative. The initiative would help develop a long-term approach to better address the unique health, social and education needs of Inuit children.

Through solicited support from parents and guardians and working with social workers, the IDEA identified 35 students for the proposal.

The IDEA is currently waiting for a quote from a group of professionals who could provide the services outlined in the project and hope to submit the proposal to Health Canada in February.

The school year began with 10 teacher shortages. Currently, Inuksuk High School has one vacancy for a math-science teacher and Nakasuk Elementary School has vacancies for an Inuktitut teacher and two language specialists.

That means the Inuktitut language program is lacking in the elementary grades, Workman said.

Workman said the board continues to lobby Nunavut’s education minister for staff housing for language specialists.

The board also asked for community feedback on school closure policies due to inclement weather, catchment for students moving to Joamie Court, a restorative justice policy for schools, and the schools’ busing contract, which expires in June 2020.