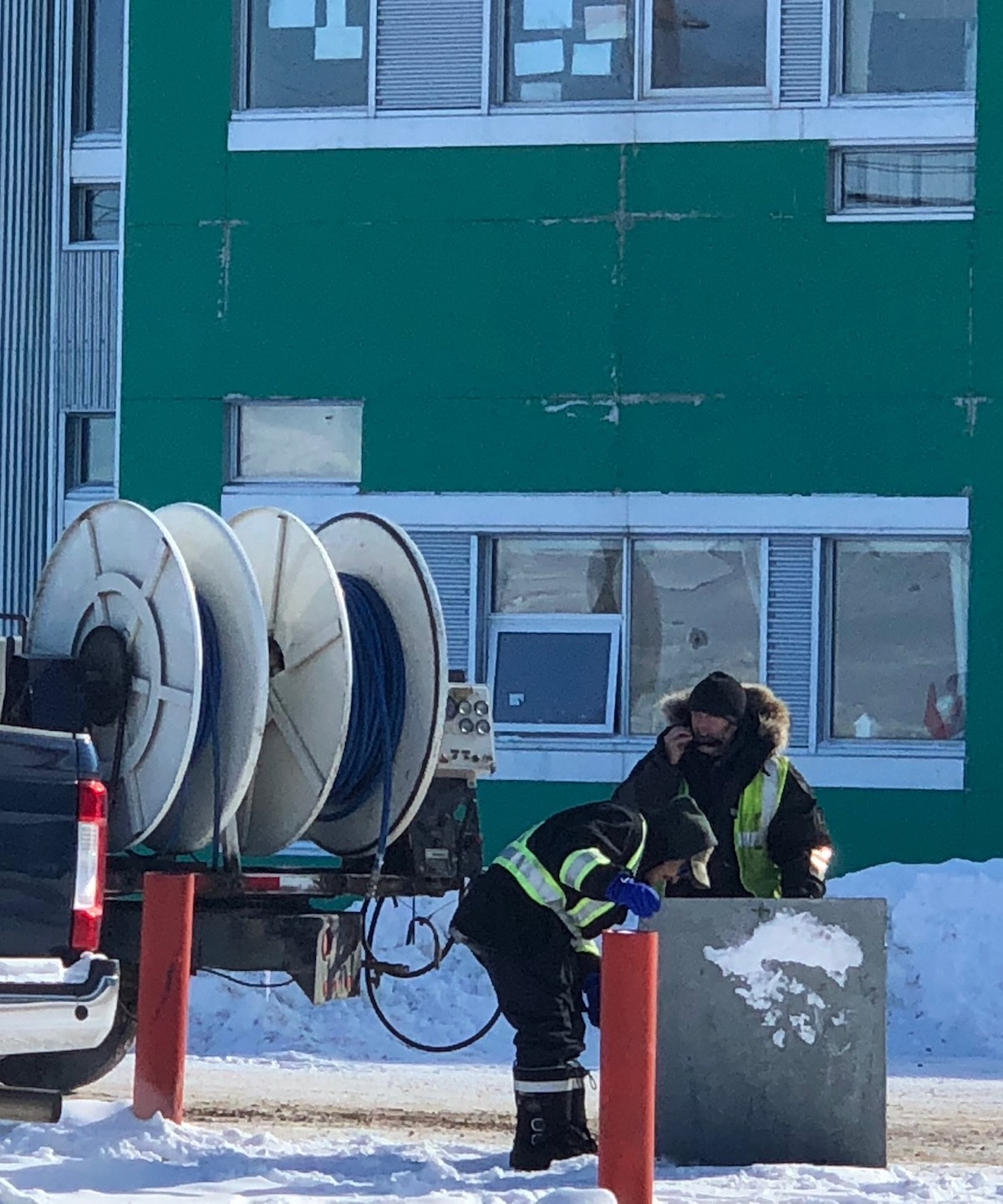 Workers arrive at Iqaluit’s Aqsarniit Middle School on Monday afternoon with a long hose to remove a blockage in the sewage main. The school sent home roughly 380 students at 1 p.m. that day and remained closed on Tuesday morning. (Photo by Jane George)

Iqaluit’s Aqsarniit Middle School will remain closed this morning, after its sewage line froze on Monday, causing kids to be sent home early in the afternoon.

It’s just the latest sign that the water and sewage system of Nunavut’s capital city is in urgent need of a major upgrade. In March, many buildings, both commercial and residential, lacked water at some time due to water mains freezing up and breaking.

The middle school would remain closed on Tuesday, the Iqaluit Education Authority said late Monday, while the City of Iqaluit said it had sent in a team to blast the service and main line into the school.

The school closure came just days after sewage overflowed at the City’s sewage collection point at Lift Station 1, located between units 1000 and 738.

This prompted the city to ask residents to avoid the area, including the snowmobile trail, until the discharge was contained and cleaned up. 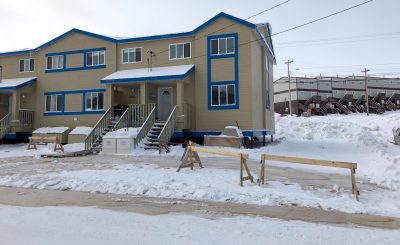 A row house in Iqaluit’s Crystal Ridge complex has a semi-frozen pool of sewage in front of its entrance on April 1. This sewage problem is just one of many that have hit the capital of Nunavut recently. (Photo by Jane George)

As well, residents of the 2700s in the Crystal Ridge complex owned by Northern Property REIT are upset about the small frozen pond of sewage that’s formed in front of a house.

That’s not related to the issues at the nearby school, the city said.

The sewage comes from a break, said a resident who did not want to be named. But he didn’t know more.

But he said neither the city nor the property management company has stepped up to clean up the dirty, unhealthy mess that remains frozen under his house. He said they told him, “we can put lime there in the spring.”

“But that means the kids will bring lime into the house?”

Northern Property REIT did not return a call for more information, so it’s not clear where the problem came from. Contractors were digging around the property late Monday to get more information, a resident said.

The city has said before that the entire sewage system needs to be replaced, but that such a repair will be costly.

A sewer main is expensive on its own: the replacement of one costs $2,000 per linear metre.

A document prepared by the city two years ago, which Nunatsiaq News obtained, shows the cost for a full replacement of the water and sewage system: $55.2 million would go to the piped water system and $58.2 million to the sewage collection system.

Parts of the piped water and sewage collection system date back to the 1960s.

If the system could be replaced, “the City of Iqaluit would have the necessary modern and suitable essential infrastructure it requires and the innovative overhaul would transform Iqaluit into what the capital of the territory should be,” document says.

Iqaluit’s ongoing problems with buried pipes are partly due to the climate change that is causing changes to the permafrost and stability of the mains, which are now more subject to freezing.

The problems are also a product, in part, of how Iqaluit grew: “development has been sporadic, too oft inadequately researched, underfunded, poorly planned and implemented, usually by using southern materials and southern method—rarely looking to other Arctic nations to learn from their best practices,” the city document said.

To help cope in the short term, the City of Iqaluit plans to create new development charges that would fund the replacement of an old sewage line that’s currently at capacity and is to blame for some messy spills in the past, including one last summer that flooded a home with several inches of sewage.

This proposed development charge would apply to all new developments except for renovations or expansions of an existing dwelling, developments in trucked service areas where no future services are planned, and developments that already have a contribution included in the land costs.