‘We have been left behind,’ group spokesperson says at Nunavut Planning Commission’s land-use hearing 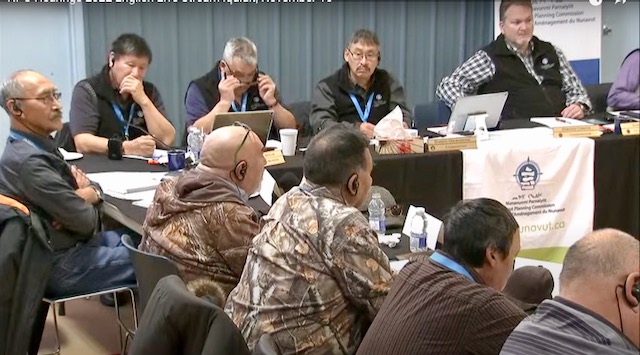 A Government of Canada representative spoke at the Nunavut Planning Commission’s land use plan hearing Friday, but it was Ben Kovic of the Amaruq Hunters and Trappers Association asking for better funding from the federal government that got the crowd’s applause.

“We can barely put proposals together,” Kovic said.

His comments and questions came during the fifth day of hearings on the Nunavut Land Use Plan, held this week in Iqaluit.

The Nunavut Planning Commission is in charge of developing a land-use plan for the territory. It proposes where resource extraction and development can occur and which areas will be protected.

The commission has been touring around Nunavut to hold hearings on the proposed plan. It hosted hearings this fall in Cambridge Bay, Rankin Inlet and Pond Inlet. A hearing was also held in Thompson, Man.

The Government of Canada’s report and concerns for the current state of the land use plan were presented Friday.

Kovic, representing the hunters and trappers organization based in Iqaluit, spoke of the challenges brought about by the federal government giving each HTO the same amount of funding regardless of its size.

In Iqaluit, he said, Amaruq has more than 4,000 members yet it receives the same funding as the smallest communities in the territory.

That means Amaruq has fewer resources to perform important tasks, such as not having a technical writer to prepare reports and better engage in consultations for this land use plan hearing, Kovic said.

“We have been left behind,” he said.

During the morning session, HTO members and elders were reminded by the chairperson of the hearings and planning commission, Andrew Nakashuk, that questions were to be focused on the land use plan.

Kovic said the reason members and elders speak on other topics is because they do not get enough opportunities to have interaction with groups such as the federal government.

In response, Nakashuk said while he didn’t want to limit discussions, he has to ensure conversations are focused on the land plan so that all the organizations have time to present and receive questions.

He said that includes Nunavut Tunngavik Inc., the Government of Nunavut and Inuit associations.

“We too don’t see them all the time and need answers,” Nakashuk said on behalf of the planning commission.

“I am aware of the historical underfunding of the HTOs.”

He said he’s aware of the challenges HTOs have in giving groups like the federal government the information it needs, as well as the crucial role HTOs play in managing Nunavut’s wildlife.

Audla said that during negotiations for renewal of the Nunavut Agreement, better funding for HTOs can have more emphasis.

He added the federal government has committed $46 million since 2015 to the Nunavut Planning Commission with the intention that HTOs would access some of that funding.

Other concerns HTO members and elders brought up to the federal government Friday included better protection of marine animals, cleanup of the distant early warning line, and climate change adaptation.

The federal government’s presentation included a recommendation that the deadline for consultation with HTOs be pushed back from Jan. 10.

The deadline should be pushed back “weeks, not months,” Audla said.

Other concerns mentioned by the federal government included the need for more clarity for overlapping land designations in the land use plan, and better protection of sea ice.