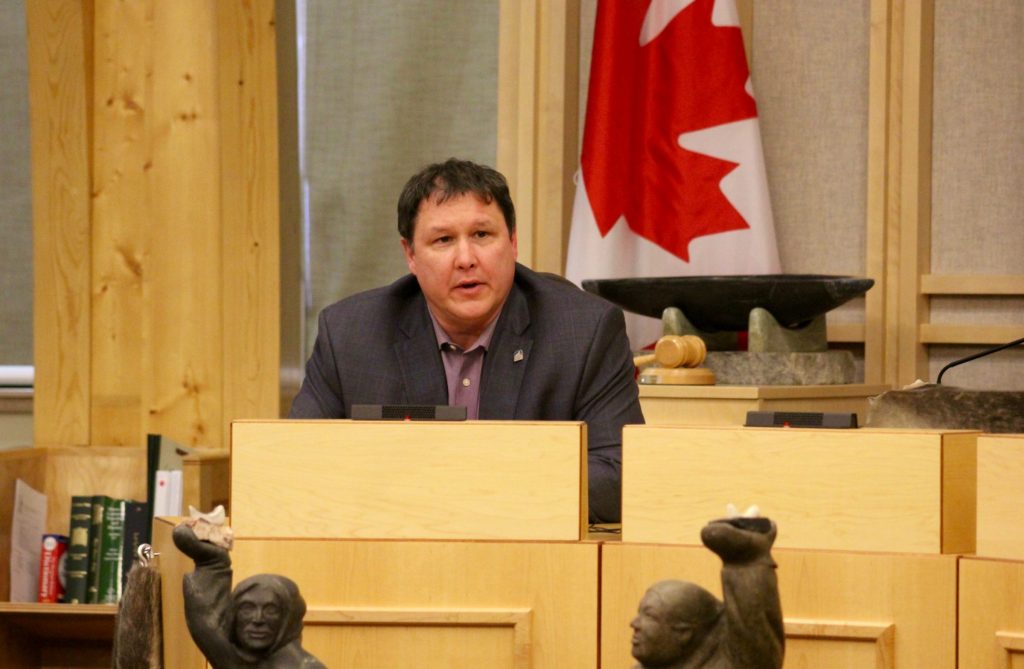 George Hickes, Nunavut’s health and finance minister, told reporters Monday that the GN is considering a temporary isolation hub in Iqaluit for medical travellers, but the government has not made a final decision. (File photo)

A temporary isolation hub is being considered in Iqaluit to help with a backlog of medical travellers in Winnipeg, Finance Minister George Hickes said at a news conference today.

In Winnipeg, the wait for medical travellers to get into the isolation hub is up to three weeks, Hickes said.

Hickes said he wanted to clear up what he called “misinformation” about a hub opening in Iqaluit.

There was speculation on social media over the weekend that the Iqaluit hub was “a done deal” and people were arriving tomorrow from Winnipeg, Hickes said.

“That’s not the case,” Hickes said. “We understand the concerns raised on social media over the weekend. However, nothing has been confirmed about an Iqaluit or an additional Winnipeg hub at this time.”

“We recognize the fear that comes with COVID-19, but we need to balance that fear with facts.”

The GN is also looking at the possibility of creating a second hub in Winnipeg specifically for medical travellers, Hickes said.

Dr. Michael Patterson, the territory’s chief public health officer, said the GN has been exploring the idea of a hub in Iqaluit as a one-time, short term plan to help alleviate the backlog of medical travellers in Winnipeg.

“This isn’t a punishment. This is to help keep Nunavummiut safe.… It’s not easy, I fully acknowledge that. But it’s a responsibility we all have, to help keep our populations, to help keep our families safe. I know I for one would not want to be responsible for getting someone I love sick,” Hickes said.

The Qikiqtaaluk Corp. has been contracted to run the Government of Nunavut’s isolation hubs, Hickes said.

Finance Minister George Hickes estimated the Government of Nunavut will pay the Inuit-owned Iqaluit corporation about $230,000 a month to operate the isolation hubs.

Hickes said running the isolation hubs has taken resources away from the GN, especially in the departments of Health and Community and Government Services.

QC will be responsible for general oversight of the hubs, including working in the hubs themselves, helping to provide access to services like mental health and coordinating with GN health staff.

Hickes also addressed concerns that Inuit are being treated differently in isolation hubs than non-Inuit. Through QC, more Inuit will be employed to work on and in the hubs, he said.

“Having more Inuit involved in the process, having people on the ground at the hubs that are Inuit and bilingual will be optimal,” Hickes said.

Hickes also noted the $18.9 million for Nunavut announced by the federal government last week for economic relief, but said further details on how and when the money will be distributed is yet to come.

Hickes also said that alcohol abuse has “probably been the most challenging aspect of the isolation hubs.” It has caused some people to have to restart their isolation period, he said.

Counselling for addictions and mental health support are available at the hubs, he said.

“Like with any addiction or behavioural issue, people have to ask for help.… As far as access to alcohol, we have very little control over that,” Hickes said.

As of last week, the GN has spent $15 million on the isolation hubs, Hickes said.

Premier had self-isolation plan approved by the GN

Officials also addressed the premier’s actions involving his 14-day self-isolation at his cabin outside Arviat.

CBC Nunavut reported on Sunday that Premier Joe Savikataaq had travelled to Winnipeg to retrieve his private plane and then self-isolated at his cabin outside Arviat rather than in a hotel. This was done with the approval of the chief public health officer’s office.

Savikataaq defended his actions in a statement posted on Facebook Sunday.

Patterson said Savikataaq’s case was treated the same way his department treats other private pilots flying into the territory.

Patterson said even if the GN made pilots isolate in the hubs, they could potentially stop at other places along the way. The safest way is to have them isolate as soon as they arrive in Nunavut, Patterson said.

Patterson said around two dozen pilots have had self-isolation plans approved in Nunavut.

In one case, someone had travelled from Greenland and arranged to isolate in Nunavut.

Patterson said he didn’t know exactly how many Nunavummiut have had self-isolation plans approved.

There are also plans in place for fisheries’ crews to apply for exemptions and isolate in Nunavut upon their return from Greenland, Patterson said.

The premier is still in Arviat and is expected back this week.

Patterson also said the GN is still awaiting the results of the COVID-19 tests sent south for two workers who tested positive at the Mary River mine.