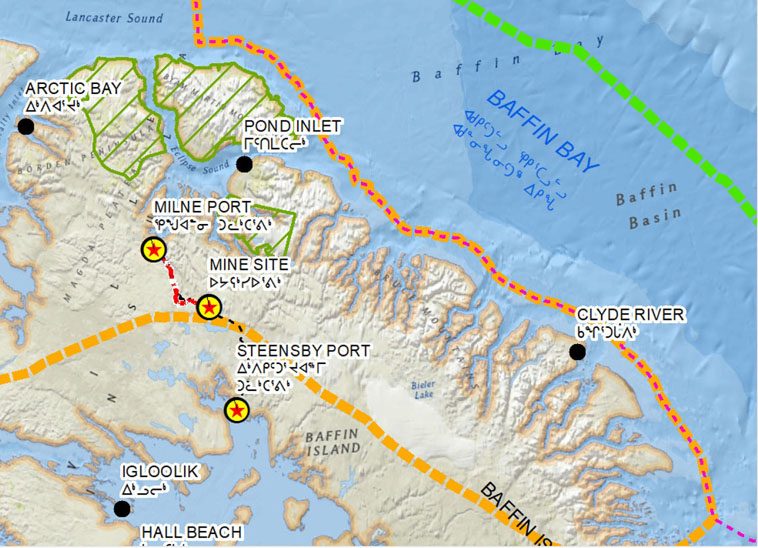 Two workers at Mary River mine are presumed to have COVID-19. The workers are in isolation and asymptomatic. Tests to confirm the cases have been flown south. (File photo)

“The individuals and their contacts are asymptomatic and were immediately placed in isolation. Additional swabs were taken and sent for confirmatory testing at a southern lab, with results expected early next week,” Dr. Michael Patterson said in a news release today.

While there was a presumptive case of COVID-19 at the mine two weeks ago, Patterson said there is no evidence of the disease’s transmission at the site.

In its own news release, Baffinland said that contact tracing done shows that the people who are presumed to have COVID-19 picked it up in a southern location.

The mine tests its workers as soon as they arrive in the territory, and every few days after.

One person who’s presumed to have COVID-19 initially tested negative when arriving at the mine site on July 7, Baffinland said in the release. Results from a test done five days later came back positive. People thought to be in contact with that person were put in isolation, and swabs were done on them.

These swabs were sent to Iqaluit to be tested. One of these swabs tested positive for COVID-19, Baffinland’s release said.

Further contact tracing was done for this person, and all people are in isolation at the mine site.

Swabs on these people have already been sent to an accredited lab in Hamilton, Ontario, to confirm the cases, Baffinland said. The results of these tests are expected early next week.

Nunavut has two accredited testing machines in territory. But Patterson said that in order for positive results from these machines to be reliable, they need to have given results for at least 15 positive cases of COVID-19, and so far, all of Nunavut’s cases have been negative. That’s why swabs from the mine need to be sent south for confirmation.

“We’re victims of our own success,” Patterson said at a July 13 news conference.

Baffinland said its two presumptive COVID-19 cases “tested on the very low end of the infection signal and are very unlikely to be contagious.”

Baffinland charters planes to fly workers to the mine site every two weeks so they don’t have to fly on commercial planes. As well, they have an area set aside to isolate workers presumed to have COVID-19.

Since March, all Nunavummiut who work at Baffinland’s Mary River mine have been off work with pay. Furthermore, mine workers who are flown in from the south do not have any contact with Nunavut communities.

“The risk of spread of COVID-19 in our communities in relation to these presumptive cases remains very low,” George Hickes, Nunavut’s health minister, said in the government’s news release.

The presumptive cases at the mine do not affect Nunavut’s current health measures, the territory’s re-opening plans, or the fact that travel without 14 days of isolation is permitted between Nunavut and Churchill and the Northwest Territories, the release said.

The person who tested positive on the mine’s testing equipment two weeks ago later tested negative on accredited machines in labs in southern Canada. That person was also asymptomatic. Patterson said it will never be known if that was a false positive, or a very mild case of COVID-19.

The Government of Nunavut is holding a news conference on Wednesday afternoon to provide more information.