‘I don’t think any of us do it, really, to be thanked,’ says one volunteer. ‘It’s just a nice thing to do.’ 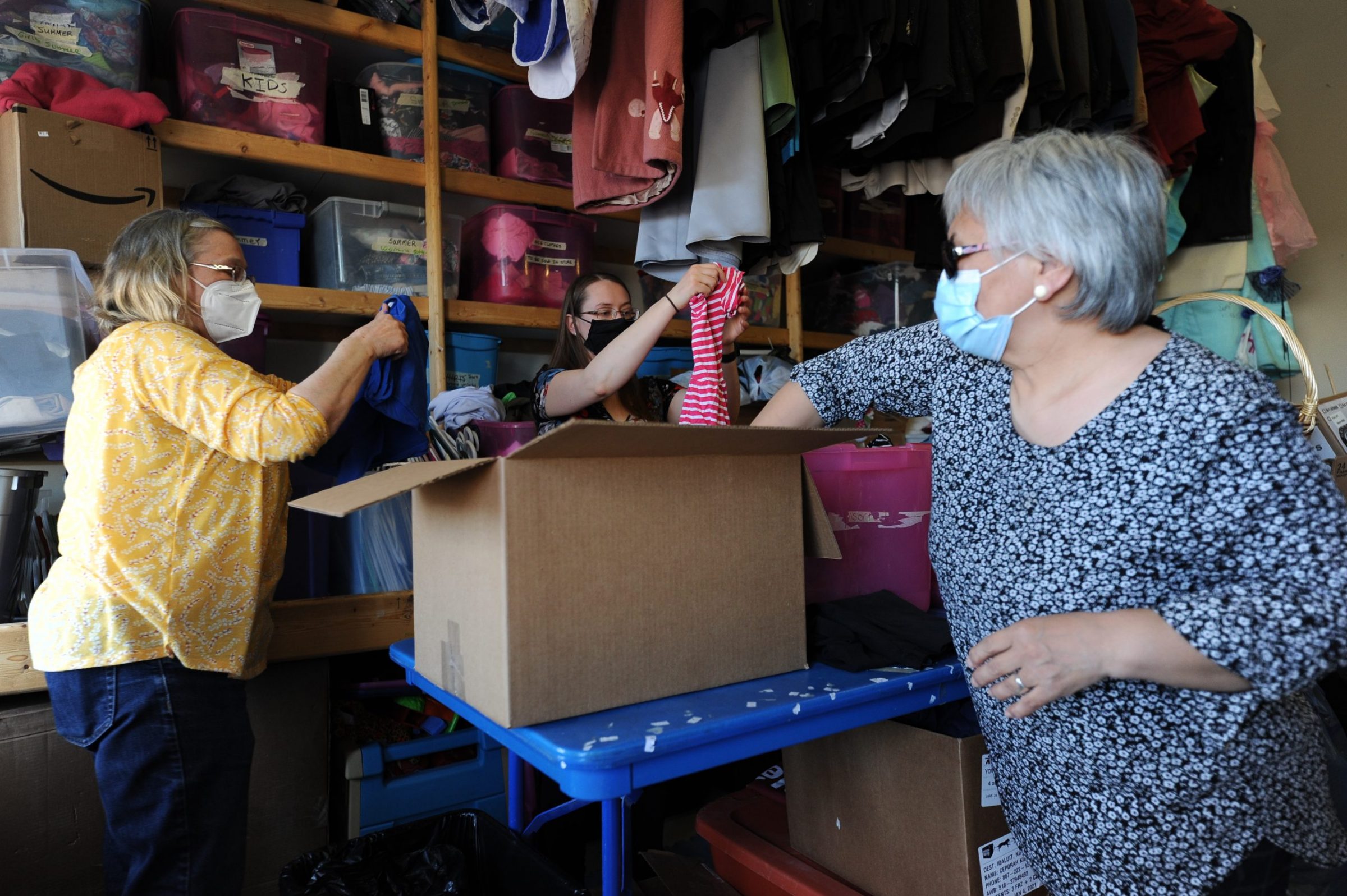 Linda Ham (left), Anika Bychok (centre) and Susan Tigullaraq (right) fold clothes and pack them into boxes in Piviniit Thrift Store’s back room on a Wednesday evening. Once full, the boxes will be brought to the RCMP hangar for police to pack them on their jet for delivery to each of Nunavut’s communities. (Photo by David Venn)

Volunteers at the Piviniit Thrift Store Iqaluit have rolled up clothes, packed them into boxes and shipped them across the territory with the help of RCMP officers and Nunavut’s Department of Family Services staff.

The plan is for every community to get one box, which has approximately 12 kilograms of assorted clothing of all styles, colours and sizes, by the end of summer.

“We have so many donations … we just can’t keep up with [it], in terms of getting it out into the store for sale,” said Anika Bychok, the store’s volunteer coordinator. “So that was a big part of it too, is feeling like, we have so much and how can we spread that wealth?”

The boxes were packed onto the RCMP’s Pilatus jet on June 11 and some have already been dropped off to Family Services in a handful of communities, said RCMP spokesperson Cpl. Pauline Melanson.

Police dropped off a box in Cambridge Bay over the weekend and at Qikiqtarjuaq on Monday. Next up are Naujaat and Coral Harbour.

A similar initiative ran infrequently between 2011 and 2017, said Linda Ham, a long-time volunteer with the Piviniit society — the charity that runs the store — and the current treasurer. Even then, the boxes of donated clothes only reached communities on Baffin Island.

But now, after having partnered with the government’s Family Services Department, which has an office in every community, the donations have a place to go and people to distribute them.

Bychok said the society has already heard from some people who received the clothing.

“The majority of people have responded and all of them … have said, ‘We’re so excited about this; thank you so much for the donations,’” Bychok said.

By the time all the boxes are dropped off, a new batch will be ready to go for the next departure, although there is no set date, she said.

For the volunteers, it’s just one more reason to keep returning to the store every week to give back to the community.

Bychok said she likes that the clothing drive is in line with the society’s goals of providing inexpensive clothing and donating the money it makes to community programs.

“We do so many different things,” she said.

Susan Tigullaraq, whose son died two years ago, said she volunteers because it keeps her busy and gives her an opportunity to help unilingual elders.

“[Volunteering at the thrift store] makes me feel good, especially when elders come,” Tigullaraq said. “I help them [by] communicating with them in their language.”

And for Ham, who has been with the store since it opened in 2009 and served as the chairperson for a few of those years, volunteering is a fulfilling hobby where she can do good and see people that are like family.